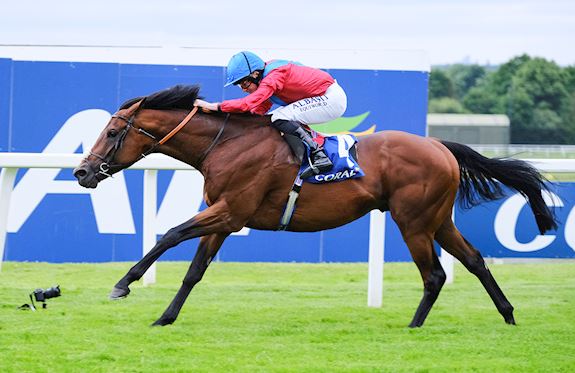 A son of New Bay, Bay Bridge was settled towards the rear of the five-strong field as multiple Group One winner Addeybb made the running. The 6-5 Favourite Mostahdaf, who was unbeaten at Sandown Park previously, made smooth headway to take the lead entering the final quarter mile but Bay Bridge made a powerful challenge down the outside to move into pole position a furlong from home. He stayed on strongly inside the final furlong to win by five lengths.

James Wigan, joint-owner alongside Ballylinch Stud and breeder of the winner, said: “It was impressive. He is such a big strong boy and we rather thought in the paddock that he might just need the race so we are particularly pleased.

“We have always thought a lot of him and Sir Michael has been very complimentary about him. It is a very nice surprise. I think everyone was pleased with him but until they run, you don’t know. I think you would probably be inclined to stick to a mile and a quarter for the moment and I think that stepping up to Group One company would be quite likely.

“He has just won a Group Three very impressively and he has beaten some good horses. It was a good race today.

“Ryan said he did it well and he showed a great turn of foot. It is very exciting. Just the way he quickened from good horses was impressive. He looked to be going very easily and you could see Ryan was not wanting to expose him too early and he was keeping him in so there was still something in the tank we just didn’t know what.

“Ballylinch Stud brought him in the winter and it is very nice for them too as you feel a bit guilty if you sell them half a share in a horse and it doesn’t work out.

“I would have thought (the mile and a half would be in reach) on the dam’s side.

“It is very nice to see Sir Michael with some nice horses coming through again.”

Ryan Moore added: “He picked up very nicely and went through the line well. He has won five on the spin now and he seems to have stepped forward every time.

You would be hopeful he would carry on doing that. I’m very happy with him. He is entitled to (go up to Group One company) as he has beaten some very solid horses there. Hopefully there is plenty to look forward to.

“He had a few issues last year, nothing major, he just had to wait but he has improved with every run. I’m happy.”