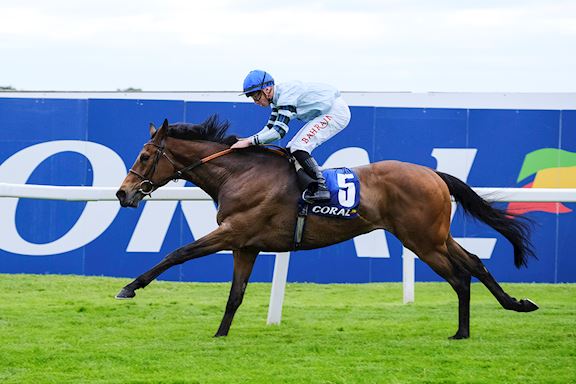 Hughie Morrison believes Quickthorn is worthy of a swift return to Group One company after hailing his tenacious front-running success in the Coral Henry II Stakes at Sandown Park this evening as a “great effort”.

Having filled the runner-up spot on his two previous starts this season, the gelded son of Nathaniel finally gained the victory he had been threatening with a first Pattern race success in the Group Three contest.

It was clear from an early stage that jockey Tom Marquand intended to make the two-mile prize, which Morrison claimed in 2015 with Vent De Force, a stamina test after opening a sizeable advantage early on in the race.

Entering the home straight, it looked as though nothing would catch Quickthorn. However, approaching the final quarter of a mile he was eyeballed by recent Newmarket scorer Nate The Great, while both Enemy and Rodrigo Diaz looked set to mount their challenges just in behind.

Despite being pressed late, Quickthorn was not to relinquish his lead and the climb to the line he continued to find plenty under Marquand to score by a length and three quarters from Nate The Great.

Morrison said of the successful 11-4 favourite: “He is a damn good galloper and Tom said the ground was quick enough for him today and he could feel he wasn’t enjoying it down the hill. I think the autumn is his life.

“He is worth, on that performance, going to the top level again. We didn’t put him in the Gold Cup at Royal Ascot as the likelihood of the ground at Ascot, which he loved last year when he won, being in his favour is doubtful.

“I’ve not really discussed that (the ride) with the jockey yet. The idea was to go forward and follow one but he found himself in front and he was enjoying himself and he got it right.

“You tell me (that he pulled away again) I wasn’t enjoying any second of that from about a furlong on a half but it was a great effort from him. What a horse. He is a lovely homebred horse of the Blyth’s.

“We had a go at the Prix Royal-Oak last year. He had ulcers last year and lost his form at the end of the season but this year we apparently have that under control and I think he is still improving.

“He had most of his three year old career off. He got a bit jarred up as a three year old and they (the owners, the Blyth family) made a great decision and turned him away for six months. We did the same thing to Telecaster and look what happened to him when he came back.

“Last year went fantastically well until October and it hasn’t gone badly this year. We weren’t going to go to Nottingham when he got beat by Trueshan, who looks the best, but we are improving.

“It is a good division at the moment. We would have to supplement for the Gold Cup which is an even bigger call but we will enjoy this I think then make a plan.

“Tom says in the right conditions he is right up there and that we should have a go.”