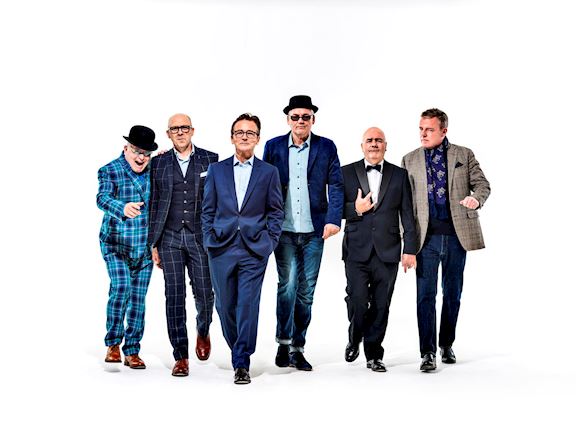 Following on from the announcement of Jess Glynne earlier this week, The Jockey Club Live and Sandown Park Racecourse are pleased to announce another amazing act for their 2019 summer season - Madness on Wednesday 24th July 2019.

Combining the genres of ska, reggae, Motown, rock’n’roll and classic pop, Madness have become one of the music industry’s best loved British bands. Fronted by the charismatic Suggs, Madness’ ability to write songs that sparkle with the stuff of British life, that find poetry in everyday reality, has lead them to have many hits including ‘Baggy Trousers’, ‘It Must Be Love’, ‘Driving In My Car’, ‘Our House’ and the 1982 #1 ‘House of Fun’. They are songs that have left their mark on British pop culture; their spirit endures in the music of Blur, The Streets, Kaiser Chiefs, Arctic Monkeys and many more.

In the last few years they have also delivered historic performances at the Queen’s Diamond Jubilee concert, and at the 2012 Olympic Games closing ceremony cementing them as one of the Nation’s favourite bands.

“You can always guarantee an evening of brilliant entertainment with all of the classics at a Madness concert and we are really looking forward to welcoming them to Sandown Park next summer.

“They are a band loved by people from all generations so it’s set to be a great evening of racing followed by fantastic live music.”

Madness are the second Jockey Club Live headliner to be confirmed for 2019 at Sandown Park, with Jess Glynne set to headline on Thursday 8th August.

The Jockey Club Live are leading promoters on the UK live scene, delivering spectacular line-ups of some of the hottest chart talent and legendary household names to some of the world’s most famous racecourses. The Jockey Club Live concerts at Sandown Park Racecourse are a staple in the region’s social calendar and over the past few years have hosted thousands of fans of live music, with performances from artists including George Ezra, Nile Rodgers & Chic, Olly Murs and Tom Jones.

The events are renowned for combining a fun filled evening at the races with a spectacular evening concert in the informal and relaxed open-air setting of the hallowed turf.

The Jockey Club racecourses have world-class customer facilities featuring an array of award winning restaurants that cater for all tastes, be it Fine Dining through to delicious bistro food. The Jockey Club venues welcome over 2 million people a year for some of the UK’s biggest racing events so you can be sure of a fantastic evening.

Tickets will be on sale at 8am on Monday 17th December via The Jockey Club Live, with a presale available to customers at 8am on Saturday 15th December. Tickets are priced starting at £45 for adults and £22.50 for under 18’s. All T&Cs are available here. There will be hospitality packages available to suit all budgets.

In addition to Sandown Park, The Jockey Club Live will be hosting live concerts across Market Rasen, Newmarket, Aintree, Haydock Park and Carlisle racecourses next summer.

For all media information, including previews, interviews, reviews etc for The Jockey Club Live, contact Simon, Warren or Jenny at Chuff Media.

About The Jockey Club Live

Founded in 1875, Sandown Park Racecourse has provided the backdrop to some of the greatest moments in horse racing history. A day at the races at Sandown Park has it all with top-level racing throughout the year including the bet365 Jump Finale, Coral-Eclipse Summer Festival and Betfair Tingle Creek Christmas Festival meetings as well as the popular Music Nights.

Sandown Park Racecourse is part of The Jockey Club, which stages thrilling sporting occasions including the Randox Health Grand National, The Cheltenham Festival and The Investec Derby. Millions of people every year enjoy special experiences through racing, music, food and entertainment. Governed by Royal Charter, every penny The Jockey Club