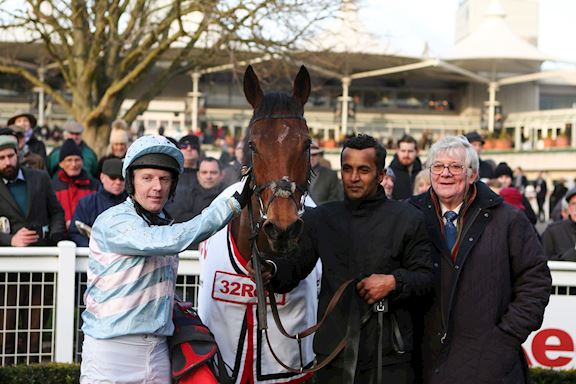 Aside from Sandown’s steeplechasing showpiece, the Tingle Creek chase, the Unibet Tolworth Hurdle has enjoyed as rich a supporting cast as any at Surrey’s premier course. It is a race whose champions (and indeed some of the vanquished in defeat) feature firmly in racing’s canon of greats.

The first running in 1976 threw up as emphatic a winner as the race has seen as the Peter Kent trained Grand Canyon romped to a 30-length success. Unlike some names in the illustrious hall of fame, however, he was unable to follow victory in the Tolworth by following up at the Cheltenham Festival.

The race was twice abandoned due to snow in between its inaugural birth and the 1984 renewal which crowned the most famous winner of all. Little known at the time, a flashy grey by the name of Desert Orchid, trained by David Elsworth, scored in trademark fashion from the front under jockey Colin Brown. Just a five-year-old at the time, he has entered not just racing, or even sporting but cultural and historical folklore, winning nearby Kempton’s King George VI Chase on four occasions as well as a memorable Cheltenham Gold Cup in 1989.

Away We Go’s victory as 4/6 shot in 1988 gave trainer John Jenkins the honour of being the first man to win the race twice in any form having also returned triumphant in 1985 with Wing and a Prayer. His charge amounted to little thereafter, unlike 1990 hero Forest Sun, who became the first to do the Tolworth-Supreme Novices’ double when also winning at Cheltenham in March.

The winningest trainer in the race’s history, as with so many others, is Nicky Henderson. His first winner came courtesy of New York Rainbow in 1992 though the runner-up Muse proved a different animal as a dual Grade One winner later in his career. Further class acts started pouring in come the late 1990s.

The first that jumps out is Strong Promise, famous for downing One Man at Ascot in his pomp, though he had to settle for second behind Right Win in the 1996 running. Another is French Holly, winner later of the Royal & SunAlliance Novices’ Hurdle and the only horse thought capable of challenging the mighty Istabraq in the 1999 Champion Hurdle, eventually finishing third. That year’s winner was Behrajan, a Graded winner over both hurdles and fences and who was fifth to Best Mate in the 2003 Gold Cup.

And yet Best Mate, despite his brilliance, had to settle for second in the 2000 Tolworth behind Monsignor, ridden by Norman Williamson, whose three victories in the race sit him alongside Ruby Walsh and Barry Geraghty as the most successful horsemen in the race’s history.

The mid-2000s were a golden period for Paul Nicholls as Noland, Silverburn and Breedsbreeze scored in successive years from 2006. But it is from 2015 where the race has truly embodied its Grade One title. All four victors, L’Ami Serge, Yorkhill, Finian’s Oscar and Summerville Boy, went on to record further top-level successes in varying disciplines. The one-two twelve months ago, Summerville Boy and Kalashnikov, filled the same two positions in the Supreme confirming the immense strength of this race.

The Tolworth Hurdle is the first Grade One event of the calendar year and judging by the past, this weekend’s near future could well present the birth of a star once more. It is certainly a race worthy of its stature.

Our guest article is written by Joe Napier, a media student and blogger.
Read more by Joe on his blog, 20yearoldtiptser.wordpress.com.