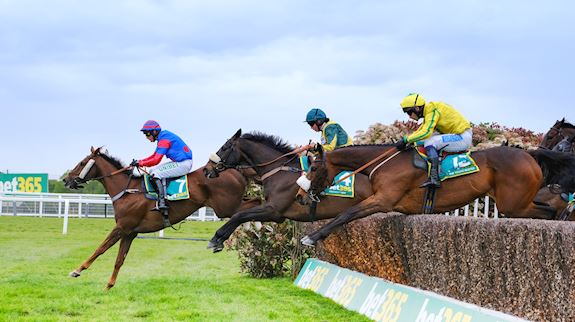 After finishing second to Defi Du Seuil on his seasonal re-appearance at Cheltenham, connections of Politologue are hopeful the eight-year-old is able to reverse that form and repeat his 2017 success in the Betfair Tingle Creek Chase at Sandown Park on Saturday 7th December.

“I was very pleased with Politologue at Cheltenham, he ran a really sound race. He had to make his own running and he will definitely be better in a stronger run race.

“Sandown suits him well, the softer the better, so I’m really looking forward to a rematch with Defi Du Seuil off level weights.

“I think he is very good over two miles, he ran very well at Cheltenham last time, he was second in the Champion Chase at the Festival last season. He is versatile, he could still win over two and a half miles, but for now we are going to stick to two miles.

“He has got to take on Defi Du Seuil, who beat him the other day, but he is three pounds better off. Un De Sceaux might run as well. I hope he does because he always makes it a good sound gallop. I think we are in really good shape, I think the horse is as well as he has ever been and Sandown will suit him very well.”

“I was delighted with him at Cheltenham. Making the running wasn’t ideal for him, he is a better horse with a lead. I think he will come on a good bit for the run and it was a fantastic prep for the Tingle Creek. He only got out sprinted by Defi Du Seuil.

“He is very good around Sandown, he jumps for fun around there. I think he will put up a bold performance and won’t be far away.

“The wind-op over the summer has helped. His wind seems very clear and you can even tell the difference at home on the hill gallop. I am confident he will put up a bold show in the Tingle Creek.

“All his best form is over two miles, but I still wouldn’t rule him out if there was a nice race over two and a half miles, there is definitely a big race in him over that trip.”

Sandown Park is part of The Jockey Club which stages thrilling sporting occasions including the Randox Health Grand National, the Cheltenham Festival presented by Magners and The Investec Derby. With Her Majesty the Queen as its Patron, The Jockey Club is governed by Royal Charter to act for the long-term good of British racing. Founded in 1750, today The Jockey Club is the largest commercial group (2018 turnover: £214.6 million) in Britain’s second-biggest spectator sport, operating 15 racecourses nationwide, The National Stud, Jockey Club Estates, Jockey Club Catering, Jockey Club Live, Jockey Club Services and charity, Racing Welfare. Every penny The Jockey Club makes goes back into the sport to help to make it the best in the world. For more information please visit www.thejockeyclub.co.uk.