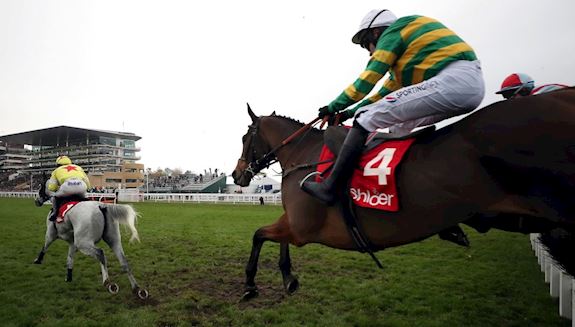 Heading the market at 13/8 with Betfair for the two-mile highlight is Defi Du Seuil (Philip Hobbs/Barry Geraghty).

The J P McManus-owned six-year-old was a three-time G1 winner over hurdles as a juvenile in the 2016/17 season, including in the JCB Triumph Hurdle at Cheltenham. Last season he made the successful transition to chasing and landed two G1 novices’ chases over two and a half miles at Sandown Park and Cheltenham. On his return to action at Cheltenham on November 17 in the G2 Shloer Chase, he showed the drop down to two miles was no problem at all when defeating the re-opposing Politologue (Paul Nicholls/Harry Cobden, 5/1) by a length and a quarter.

The 11-time champion trainer said: “Politologue ran a really sound race at Cheltenham and he will definitely be better with a stronger run race.

“The softer ground, the better, and Sandown is a track which really suits him. Off level weights, that will be a great rematch with Defi Du Seuil.

“He is a very versatile horse who has won over two and two and a half. The horse is in really good shape and we are looking forward to it.”

Nicholls is also represented by Dolos (Harry Skelton, 25/1), who landed a handicap over the course and distance in February and finished runner-up on his return to action in the G2 Haldon Gold Cup at Exeter on November 5.

Another previous winner alongside Politologue in Saturday’s line-up is Un De Sceaux (Willie Mullins/Paul Townend, 4/1). The tremendously consistent performer scored by a length from Sire De Grugy in 2016 and was also runner-up in the 2018 renewal when going down by four lengths to the mighty Altior. The 11-year-old will be making his seasonal reappearance on Saturday, having last been seen when taking the G1 Champion Chase at Punchestown on April 30.

There is a second Irish-trained contender in the line-up with Ornua (Henry de Bromhead/Aidan Coleman, 33/1) making the return to Sandown Park. The eight-year-old was the length and three-quarters runner-up to Dynamite Dollars in the G1 Henry VIII Chase over two miles on this card 12 months ago and went on to land the G1 Maghull Novices’ Chase over two miles at Aintree in April.

County Waterford-based de Bromhead, who won the Betfair Tingle Creek Chase in 2011 with Sizing Europe, said: “Ornua is absolutely super at home and ran a nice race behind Cilaos Emery in the Poplar Chase at Naas on his reappearance

“We were delighted with the way he progressed last season and hopefully he can make a smooth transition into open company now.

“The Tingle Creek has been the aim since Naas and he finished a fine second behind Dynamite Dollars at the track last year."

Sceau Royal will be making his first start of the campaign, having last been seen when runner-up to Altior on the final day of 2018/19 UK Jump season in the G1 Celebration Chase over the course and distance on April 27. The seven-year-old won the G1 Henry VIII Novices’ Chase on this card in 2017.

Janika has made just five starts in the UK since arriving from France and, after some very good efforts in competitive handicap company last season won on his return to action when getting the better of Dolos by two and a quarter lengths in the G2 Haldon Gold Cup at Exeter on November 5.

Completing the line-up is Waiting Patiently (Ruth Jefferson/Brian Hughes, 8/1). The eight-year-old enjoyed the biggest win of his career in the G1 Betfair Ascot Chase over two miles and five furlongs in February, 2018 and was runner-up to Cyrname in the 2019 staging of the same race.