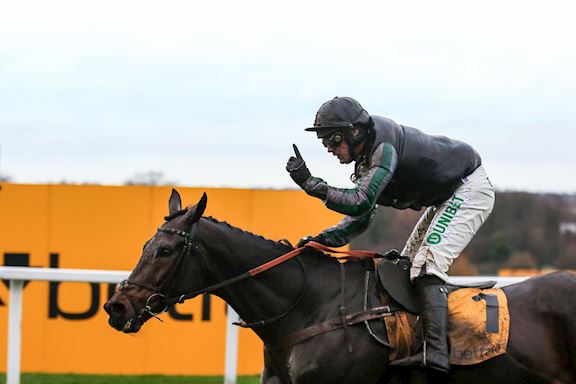 Entries are unveiled today for the £120,000 Betfair Tingle Creek Chase at Sandown Park on Saturday, 5 December.

The G1 contest, run in honour of 1970s Sandown Park legend Tingle Creek, is the highlight for two mile chasers during the first half of the Jump season and its glittering roll of honour features legends such as Desert Orchid, Viking Flagship, Moscow Flyer, Kauto Star, Master Minded and Altior.

The outstanding 10-time G1 scorer Altior (Nicky Henderson) heads the 14 entries in 2020.  A winner of 15 of his 16 chase starts, Altior was imperious when landing the 2018 renewal of the Betfair Tingle Creek Chase, coming home a comfortable four lengths clear of 2016 hero Un de Sceaux.

The 10-year-old was restricted to just two outings last season and his latest appearance came when landing the G2 Win Bigger On The Betfair Exchange Chase at Newbury in February. He is the 6/4 favourite with Betfair.

Trainer Nicky Henderson reported today: “The Betfair Tingle Creek Chase is the plan with Altior. He will start at Sandown and then we will take it from there.

"The spark is there with Altior. If you had seen him school last week, you would not have seen anything like it. You would think what on earth are you doing going over two and a half miles as this is the fastest thing you will see.

“On good ground, he is terrifying to watch over fences. I think Altior’s gallop at Newbury was essentially a day out. It is not a race, a trial, it is just an away day to give them a little spark.

“It was exactly what he needed and I am delighted with where he is. It will just have lit the candle a little bit and you know they enjoy it.

“Altior is a very enthusiastic workhorse but it does him good to come away and it will just sharpen him up."

Reigning champion trainer Henderson has won the Betfair Tingle Creek Chase twice, having also taken the honours with the outstanding Sprinter Sacre in 2012.

Politologue, who went on to win last season’s G1 Queen Mother Champion Chase at Cheltenham, features among Nicholls’ quartet of entries in 2020. He is joined by G2 Haldon Gold Cup scorer Greaneteen, recent impressive Cheltenham handicap victor Magic Saint and Duc de Genievres, successful in the 2019 Arkle Trophy Novices’ Chase at Cheltenham for former trainer Willie Mullins and an encouraging second on his first start for Nicholls when runner-up in the G2 Shloer Chase at Cheltenham on Sunday.

Last year’s Betfair Tingle Creek Chase saw a tremendous finish, with Defi du Seuil (Philip Hobbs) seeing off Un de Sceaux by a neck. The J P McManus-owned seven-year-old went on to further G1 success in the Clarence House Chase at Ascot in January but has questions to answer after running below form on his latest two starts, most recently pulling up in Sunday’s Shloer Chase.

Waiting Patiently (Ruth Jefferson) enjoyed his finest moment when winning the G1 Betfair Ascot Chase in 2018. His latest outing came in last year’s Betfair Tingle Creek Chase when he was the staying-on third behind Defi du Seuil and Un de Sceaux, beaten just a length in total. A chipped ankle kept the nine-year-old on the sidelines for the remainder of last season, but he is now firmly on the way back.

North Yorkshire-based Jefferson said today: “Waiting Patiently is in great form and the Betfair Tingle Creek Chase is under consideration.

“He ran so well in the race last year when third to Defi du Seuil. Obviously, he is another year older and he could take on some different rivals including the likes of Altior by the sounds of things.

“We will see how he is and what the ground is like closer to the time, but the Tingle Creek is definitely something we are thinking about and we would love to try and win it.

“Since his last injury, we have had a clear time of things. He is susceptible to injury, but everything has gone well since and we are looking forward to getting him back on the track."

Other interesting entries including Rouge Vif (Harry Whittington), who was third in last season’s G1 Arkle Trophy Chase at Cheltenham and a good winner on his return to action in a competitive two-mile handicap at the same venue last month.

The Betfair Tingle Creek Chase has gone to Ireland six times and there is one Irish-trained entry this year in Castlegrace Paddy (Pat Fahy), successful on his reappearance in the G2 Fortria Chase at Navan on November 8.

Betfair spokesman Barry Orr commented today: “Altior heads a fantastic set of entries for the Betfair Tingle Creek Chase. Nicky Henderson’s stable star put up a fantastic performance when winning the race back in 2018 and is Betfair’s 6/4 favourite.

“However, he is far from certain to have things all his own way with a strong quartet of entries from Betfair ambassador Paul Nicholls, who has saddled a record 10 winners of the race.

“With the likes of Defi du Seuil, Rouge Vif and Waiting Patiently also in there, the 2020 Betfair Tingle Creek Chase is sure to be a race to savour.”