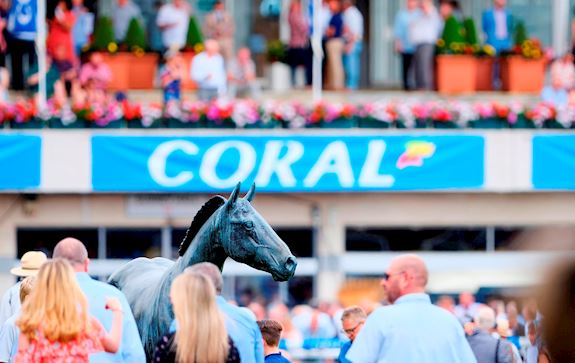 Today sees seven horses go forward for the Coral-Eclipse at Sandown Park on Saturday 3rd July. The 10-furlong Group One showpiece takes place over 10 furlongs forms part of the British Champions Series and is the first major contest where those from the Classic generation take on their older counterparts.

Heading the market at 13-8 with sponsor Coral is Mishriff for John and Thady Gosden. The four year old has already bagged two very valuable prices overseas this year with victories in the word’s most valuable race, the Saudi Cup, and the Group One Dubai Sheema Classic.

Aidan O’Brien has trained five Coral-Eclipse winners and needs one more victory to equal the record of Alec Taylor Jr and Sir Michael Stoute. O’Brien has three horses going forward headed by St Mark’s Basilica. The three year old Siyouni colt is a dual Classic winner in France this season, having scooped the Poule d’Essai des Poulains (French 2,000 Guineas( and Prix du Jockey Club (French Derby) so far in 2021. The Ballydoyle trio is completed by 2019 Juddmonte International hero Japan and Armory, who was a close third behind stable companion Love in the Prince Of Wales’s Stakes at Royal Ascot.

Also going forward today are last year’s Group One QIPCO Champion Stakes hero Addeybb, last seen when landing the Group One Queen Elizabeth Stakes at Randwick, Australia in April and Wonderful Tonight, who was the very impressive winner of the Group Two Hardwicke Stakes at Royal Ascot on her seasonal reappearance. If successful, seven year old Addeybb would create history by becoming the oldest ever winner. b

The confirmations are completed by El Drama, a disappointment behind St Mark’s Basilica last time but previously a cosy winner of the Listed Dee Stakes at Chester.

David Stevens of Coral said: "In the absence of Lord North, who had been backed into 6-1 for Saturday's race, this year's Coral-Eclipse market is dominated by the last two winners of the Prix du Jockey Club, with the year-older Mishriff just shading favouritism at 13-8, ahead of this year's Chantilly winner, St Mark's Basilica, at 7-4.

"Of the rest, both Addeybb and Wonderful Tonight could both shorten in the betting should plenty of rain fall over Sandown this week,"