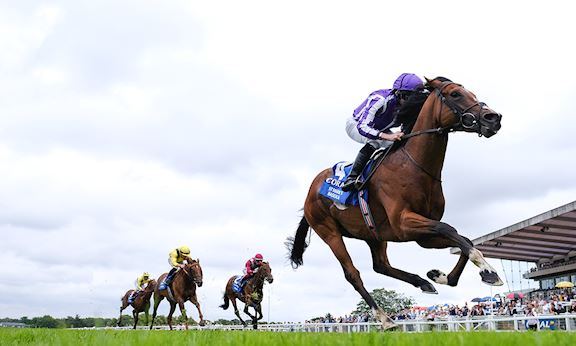 The Coral-Eclipse at Sandown Park is the first opportunity to see the cream of this year’s three year old crop take on the best of the older horses in a not-to-be missed Group One clash of the titans.

And what the great race was lacking in quantity today it certainly made up for in quantity, with three of the world’s 15 highest rated horses doing battle.

With seven other races on the card there were plenty of other talking points, including a 1,007-1 four-timer for Champion Jockey contender Tom Marquand. We sent Graham Clark to pick out five things we learned on the day …

All eyes might be on Rome this weekend for England’s Euro 2020 quarter final against Ukraine, but it was a horse named after a Venice landmark who stole the show in the Coral-Eclipse.

St Mark’s Basilica produced an impressive performance to triumph over his older rivals and land one of world horseracing’s most prestigious races.

Victory secured Aidan O’Brien’s place as the joint most successful trainer in Coral-Eclipse history with six wins and the master of Ballydoyle heaped praise on the colt, describing him as the best three year old he has ever run in the race.

With half a mile left of the 1m 1f Group One contest it looked like being a three-way battle to remember between three of the world’s best 15 horses, with older rivals Addeybb and Mishriff applying plenty of pressure at the front end.

But when jockey Ryan Moore asked the Evens favourite St Mark’s Basilica to find more he duly delivered, easing to a three and a half length victory over William Haggas’s Addeybb (7-2), with John Gosden’s Mishriff (9-4) a neck further back in third.

Afterwards O’Brien said: “Ryan was blown away by him out there today. He couldn’t believe when he asked him to quicken how well he quickened. We were over the moon and we are delighted to have him.

“He is a relaxed traveller so he doesn’t use any energy so when he comes on he comes on slowly and when they do go for him he really turns it on. I think it is a mark of a good horse when they can quicken like that.

“He came here today and ran against two proper older horses. They weren’t middle of the road older horses. There was pressure on him as he was going to be exposed if he wasn’t very good. They didn’t go very fast and he gave the two older horses first run and Ryan followed them in behind but he quickened up and put it to bed very quick which we were very impressed with. He does everything right.”

Asked to put into context just how good the performance might turn out to be, O’Brien replied: “He is a very good horse. I don’t know if we have come to an Eclipse before with a three year old as strong as that against older horses. I can’t remember doing that.

“He is progressing all the time. I think the Juddmonte or the Irish Champion will be next but he could do both as there is enough time between them.”

Tom Marquand landed a stunning 1,007-1 four-timer after winning the first two and last two races of the day, including victory on Her Majesty The Queen’s Wink Of an Eye to round off proceedings.

Of his fab four Came From The Dark’s win was arguably the most dramatic, swooping late on to take the Group Three Coral Charge, stealing the honours deep inside the final furlong.

Ed Walker’s five year old prevailed by just a neck from runner-up Arecibo, who looked to have the field beaten until the final strides, and now looks to be a genuine Sprint Cup contender at Haydock later this season.

Lambourn trainer Walker admitted it had been “really frustrating” to miss Royal Ascot with Came From The Dark after a niggling injury, but added: “My head lad who rides him every day and the vets gave me the confidence to drive on and run him today and it paid off.

“He has been a very frustrating horse until this year. I always felt he was much better. He didn’t win at two but ran well in defeat then at three we were really excited about him and he just disappointed. I think I took a year too long to geld him as I think that has been the making of him along with helping his wind a bit and he has all come together this year.”

Walker admitted the next challenge is to work out where he will send him next. He added: “He loves Haydock for whatever reason and his form there is brilliant. I think the easy six there is fine for him. He just got away with the stiff five here.

“The question is where do we go next? Do we go for a Nunthorpe or is he going to get a bit too far out of his ground over five at York? We’ve a bit of head scratching to do but working back from Haydock is my aim.”

Few victories were as decisive on the day than Auria’s impressive performance in the Listed Coral Distaff for three year old fillies.

Oisin Murphy took the Andrew Balding trained 10-3 chance to the front half a mile from home and the pair never looked back.

While the record books will show that she held off the attention of runner-up Seattle Rock by two and a half lengths, ultimately she had much more in hand.

Afterwards Balding said: "It's lovely she's a Listed winner now and that Fiona (Denniff, owner) decided to keep her rather than sell her. Chil Chil, her sister, won a Group 3 last week, and obviously she's a sister to Beat The Bank as well, and he was a pretty special horse to us.

"She's a good strong galloper and she kept going. She'd stay a mile and a quarter if we wanted her to, and I wouldn't rule it out as she probably wasn't quite at her best after missing work when she tried it at Newbury. But there's a fillies' Group Three (the Atalanta Stakes) back here in August and I think that's probably the obvious race for her. This ground certainly doesn't inconvenience her."

Jockey Murphy added: "I was very pleased with her. She enjoyed those conditions and I hope she'll build on it as she's a lovely type. I'm delighted for her breeder, who bred Beat The Bank too."

MAGICAL MORNING DOES THE TRICK FOR FRANKIE

Frankie Dettori partnered Magical Morning to a three quarters of a length victory in the Coral Challenge in the gelding’s first outing since Royal Ascot.

The four year old had last been seen when eighth of 30 in the Hunt Cup last month and took the mile trip here in his stride to defeat 16-1 chance Maydanny and Acquitted further back in third.

Afterwards trainer John Gosden said: “In fairness we teed him up for the Royal Hunt Cup but the ground went against him. He appreciated it today. He is a grand horse and I couldn’t be more pleased with him.

“It was a bit rattling at Ascot. It had been on the agenda since last autumn so this became Plan B but was always the Plan B as well. We had planned these two races nicely spaced. They are pretty smart handicaps the Royal Hunt Cup and this one.”

Magical Morning could yet find himself lining up at Glorious Goodwood in the Golden Mile, but Gosden cautioned: “He might be one for that but that is a race you don’t fancy anything in until you see the draw. He is going the right way but ground is important to him.”

HONOURS EVEN AS OPENING RACE TOO CLOSE TO CALL

There was confusion after the first race of the day when the initial result in the Coral ‘Beaten-By-A-Length’ Free Bet Handicap Stakes was altered following an issue with the photo finish technology.

Initially the judge called Phoenix Star as the winner of the Class 3 five furlong sprint, only for an immediate stewards’ enquiry to change the result to a dead heat with Hurricane Ivor.

Punters were left more confused by the photo finish image which was released after the race, as it appeared to show Hurricane Ivor as the narrowest – but clear – winner.

However, the BHA announced that due to an error with the mirror image, the photo must be judged inconclusive and therefore the result was announced as a dead heat.

Speaking afterwards Phoenix Star’s jockey Oliver Stammers said: “He’s my first winner here, so that’s brilliant. I’ve only had one ride here before, and that was when I was fourth on him the other day. He travels great, but he tends to pull up in front, and that’s what he did again in the last 50 yards.”

William Haggas, trainer of Hurricane Ivor, added: “This horse has done very well. He ran poorly first time but had been training much better since and this was a little bit lower grade. He needed every yard here, and a flat six or a stiff five will be his game. I thought the ground might be too soft for him today, but it wasn’t.

“He came from Fabrice Chappet, who suggested a change. He’s always been in the same ownership, and Fabrice has the yearling now and Jane Chapple-Hyam got a horse called Aplomb from me out of the arrangement.”