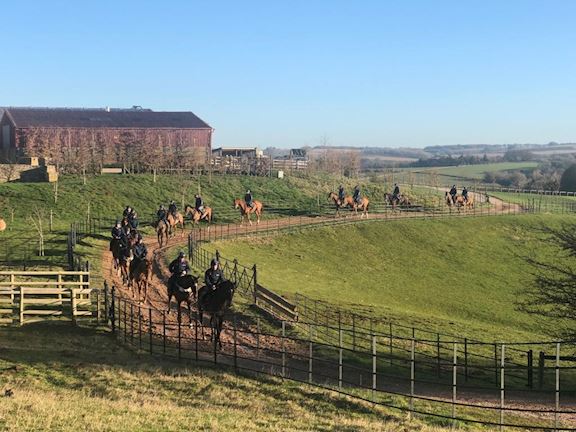 Kim Bailey has reported he is very happy with Vinndication ahead of the 888Sport Scilly Isles Novices’ Chase (Grade 1) at Sandown Park on Saturday 2 February.

Vinndication was last seen winning the Grade 2 Noel Novices Chase at Ascot and Bailey is hoping the six-year-old can extend his six race unbeaten record on Saturday.

“I am very happy with Vinndication since his last run at Ascot, he has had plenty of time to recover from it and it has always been the plan from when he went past the post, to run at Sandown Park.

“Unbeaten records are difficult things to try and keep going. He has done everything we have asked him to go and do and hopefully he will carry on doing that.”

Bailey said it was difficult to compare Vinndication’s work at home to what he does on the racecourse:

“Comparing him at home to the racecourse is a tricky one as he is a very laid back individual. He wouldn’t give you a huge amount of encouragement at home by what he does - he does it in his own way.

“Any horse that can do what he has done is very important to any yard. It doesn’t matter who you are, they are hugely exciting horses to get hold of, very hard to find and they are treasured creatures.”

“He was a very immature horse last year, and when he came back from his race at Huntingdon he had a touch of sore shins and you certainly can’t go to go to Cheltenham with sore shins or even attempt to. You have to gallop down hill which puts more pressure on him and I just felt he wasn’t ready for it.”

All of Vinndication’s wins over jumps have been on Soft ground. Bailey commented on the track and ground conditions for Saturday’s race at Sandown Park:

“The ground is going to be the hundred thousand dollar question and we will find that out this weekend. If they are putting frost covers down it will obviously make it softer or tackier.

“I have always said he is a horse that goes on Soft ground but if you watch his action at home he has got very good ground action, so I don’t know. I think it’s most probably a case of his previous opposition being slowed down by Soft ground where as he has been able to handle it. So we will find out an awful lot on Saturday!

“He has never been to Sandown before and we have got this ridiculous thing at the moment where by every time he has run he has run right handed and that has been pure coincidence more than anything else.

“I don’t see why Sandown should interfere with his ability to go. I think Sandown will suit him and I sincerely hope so anyway.”

Lostintranslation is one of ten that could line up against Vinndication in Saturday’s feature race. The Colin Tizzard trained seven-year-old will be stepping up into Grade 1 company over fences for the first time having tasted success in the Grade 2 Dipper Novices' Chase at Cheltenham on New Year's Day. Lostintranslation could renew his rivalry with the Philip Hobbs trained Defi Du Seuil who finished second behind him in the Dipper at Cheltenham.

La Bague Au Roi, who was last seen winning the Grade 1 Kauto Star Novices' Chase at Kempton on Boxing Day, still holds an entry despite trainer Warren Greatrex suggesting they will go to Leopardstown for the Dublin Racing Festival.

Other contenders include Gary Moore's, Dell Oro and Nicky Henderson’s, Ok Corrall who could come back in trip after winning a Listed prize over three miles at Warwick.

"The going on the Chase Course at Sandown Park currently remains Good to Soft, Good in places. On the Hurdles Course it is Good to Soft, Soft in places. We already have frost covers down on the shaded area in front of the stands, and will review further deployment on Wednesday. The issue is complicated by potential snow on both Tuesday and Thursday nights, which could fall as rain or sleet."

Saturday 2 February marks the return of 888Sport sponsorship at The Jockey Club racecourse, having last sponsored in the London region at the 2014 Tingle Creek.

“We’re absolutely delighted to be supporting 888sport Contenders Day at Sandown Park, which is highlighted by the Grade 1 Scilly Isles Novices’ Chase.

“With some of the most exciting young horses in training set to be on show, it’s going to be a superb afternoon of action as the National Hunt season builds to a crescendo.”

Sandown Park is part of The Jockey Club which stages thrilling sporting occasions including The Randox Health Grand National, The Cheltenham Festival and The Investec Derby. Millions of people every year enjoy the special experiences we offer through racing, music, food and entertainment. Governed by Royal Charter, every penny we make goes back into British Racing to help the sport thrive. We were founded in 1750 and today we are the largest commercial group in Britain’s second-biggest spectator sport, operating 15 racecourses nationwide, The National Stud, Jockey Club Estates, Jockey Club Catering, Jockey Club Live and our charity, Racing Welfare.