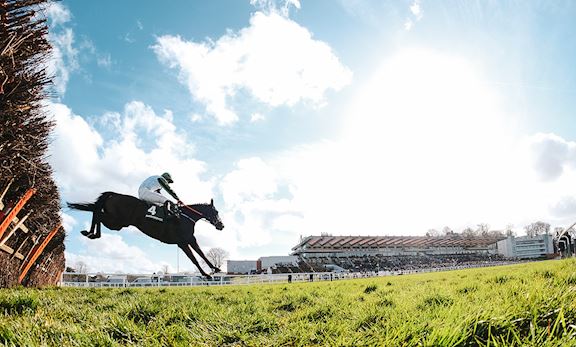 SANDOWN PARK RACEDAY NEWS: LUCCIA GIVES HENDERSON CAUSE FOR OPTIMISM AHEAD OF THE FESTIVAL™ WITH STYLISH SUCCESS AT SANDOWN PARK

Nicky Henderson may have finalised his plans for Cheltenham next week but he already has one eye on a trip to The Festival next year with Luccia, who maintained her unbeaten record by winning the British Stallion Studs EBF Mares’ Standard Open National Hunt Flat Race at Sandown Park this afternoon.

Having saddled 18 consecutive losers, the Seven Barrows trainer received a timely boost ahead of Jump Racing’s most important week of the year, thanks to the daughter of The Gurkha who followed up her debut victory at Warwick in the Listed event.

Sitting behind the early pace the 7-2 chance soon put the two mile prize to bed when sent on by Nico de Boinville before eventually crossing the line 17 lengths clear of the Willie Mullins-trained Eabha Grace.

Henderson said: “She is a good filly. It is lovely because we have had the mare and the brother, Hooper. The owners have had all those horses with us over the years.

“I said to her owners there is a nice novices’ hurdle in a week’s time before I could get out in a year’s time thought I was going to run her next week!

“I thought she would win there (Warwick). We’ve been think we would nearly be winning this all along.

“Two things happened. Milton (Harris) suddenly came in with the horse (Mullenbeg) who looked as if it was going to go to Cheltenham, then secondly we had that rain overnight which put what would have been nice ground here today back where it has been all winter.

“That ground didn’t seem to bother her at all as I thought that would blunt her speed, which she has got.

“It (the four year old allowance) is big as it is the first thing that stares off the page. David Minton said the other day she is an absolute certainty. I said, ‘don’t be stupid, you can’t be a certainty in a race like this’, but he said, ‘you wait’.”

While an appearance at The Festival will have to wait 12 months, Henderson hinted that an outing in the Grade Two Goffs UK Nickel Coin Mares’ Standard Open National Hunt Flat Race at Aintree on April 8th is now on the agenda.

He said: “I would imagine she would go to Aintree for that mares bumper there, then we will put her away. The obvious objective is in a week’s time next year for the mares novices’ hurdle.

“It is nice to finish up the week before Cheltenham knowing what is good is still good.”

Meanwhile Joe Tizzard admitted he was “chuffed to bits” with Killer Kane, who survived a stewards’ enquiry to secure the biggest success of his career in the Paddy Power Novices’ Handicap Chase.

After opening his account in a three mile novice event at Kempton Park last time out, the Colin Tizzard-trained seven year old added to his CV when making a successful drop back in trip to two and a half miles in the Listed prize.

Despite wandering about late on the 5-1 chance found more than enough to hold off the rallying Flic Ou Voyou by a length to pay back another slice of the £300,000 which connections forked out for him two years ago.

Tizzard, son and assistant trainer to father Colin, said: “We dropped him back in trip today just for the pot really. After he ran at Carlisle first time I thought he would win next time out, but he didn’t.

“Whether the tongue strap has helped or not I’m not sure. It was good ground at Kempton and I was slightly worried this would be a bit softer, but it was a good pot to aim for and he has done it nicely. I’m chuffed to bits with him.”

Referring to the way he wandered towards the end, Tizzard added: “I think it was just greenness. He has not had miles of races and he has not been in front stacks of time.

“It has taken a bit of getting today and he has just had a little wander in front. It is the first time we have seen it so it is nothing to worry about.”

A trip to Aintree will now be on the agenda for the Killer Kane with former jockey Tizzard earmarking the Grade Three Betway Handicap Chase at the Merseyside venue as his next target.

He added: “He can go to Aintree now and run in the three mile handicap on better ground there. I think that track on good ground back to three miles will suit him.”

Jockey Tom O’Brien celebrated a winner less than 24 hours after becoming a father for the second time when Musical Slave ended a losing streak stretching back more than two years in the Paddy Power Handicap Chase.

The Grade One-winning rider timed his run to perfection aboard the Philip Hobbs-trained nine year old, who showed plenty of resolve at the conclusion of the three mile contest to defeat top weight Notachance by three and three quarter lengths.

Sarah Hobbs, wife of the winning trainer, said: “Tom rode the winner of the 4.05pm at Exeter yesterday, was then in hospital at Exeter at 6pm and his partner gave birth to Toby at 7pm. He weighed 9lb 7oz so I don’t think he will be a jockey!”

On the 7-2 winner she added: “We thought we would come back and have a go here after last time. I think the ground and the non-runners helped him but he got into a rhythm and got into his jumping.

“They went too fast last time and it took him out of his comfort zone. I think you have to get there quite late with him. He is always there or thereabouts so it is lovely to see him win.

“He might go back to Punchestown as he has won there before and JP likes running his horses there.”

The victory also provided leading Grand National-winning owner McManus with a timely lift after it was announced Musical Slave’s stablemate Sporting John would miss next week’s Festival after meeting with a setback.

Hobbs added: “There is nothing much wrong with Sporting John but it is enough to keep him out of Cheltenham. Hopefully he will be okay for Aintree or Punchestown.”