The six-furlong Polytrack contest was a Fast-Track Qualifier, with No Nonsense now guaranteed a free place in the £150,000 Ladbrokes Three-Year-Old Championships, staged over the same distance on Polytrack at Lingfield Park on £1-million All-Weather Championships Finals Day, Good Friday, April 19.

Slow leaving the stalls, the son of Acclamation raced at the rear of the seven runners as Charming Kid (Richard Fahey/Barry McHugh, 7/1) and Deep Intrigue (Mark Johnston/Franny Norton, 7/2) took the field along.

No Nonsense was asked for his effort and began to make progress two furlongs from home as James Street (Hugo Palmer/Josephine Gordon, 5/1), who had raced in third, took the lead entering the final furlong.

Coming with a powerful run, No Nonsense got up in final strides to deny James Street by a short-head, with Charming Kid another length away in third. 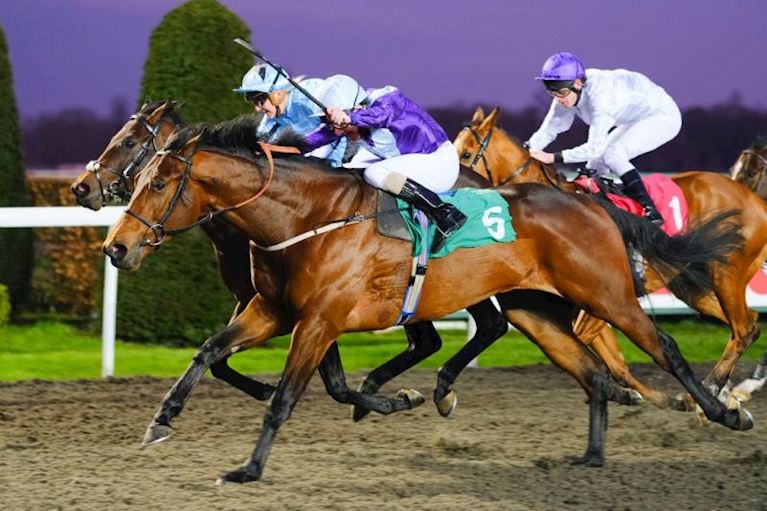 The 9/4 favourite You Never Can Tell (Richard Spencer/Adam Kirby) was unable to get competitive, coming home last of the seven runners.

No Nonsense, whose winning time came to 1m 12.45s, was the least experienced runner in the race, having raced only twice before. The colt, bred at owner Jeff Smith's Littleton Stud, has raced exclusively on the All-Weather, winning a novice race over the same course and distance in December.

Liam Keniry commented: "Speaking to Mr Elsworth, I think the plan is to go straight to Good Friday.

"I would say No Nonsense is a pretty smart horse. He was a lot more inexperienced than the other runners coming into today's race.

"He took a while to pick up, but he has gone and won well in the end.

"He looks a horse for the future."

The Jeff Smith-owned No Nonsense is the second David Elsworth-trained horse now qualified for the £1-million All-Weather Championships Finals Day on Good Friday.

Master The World secured his place in the £200,000 Betway Easter Classic, in which he was a close second last year, following success in the Listed Betway Churchill Stakes at Lingfield Park in November.