The six-furlong Polytrack contest is a Fast-Track Qualifier and Kondratiev Wave is now guaranteed a free start in the £150,000 Ladbrokes Three-Year-Old All-Weather Championship over the same distance at Lingfield Park on Finals Day, Good Friday, April 10.

Kondratiev Wave was sent off the 5/2 second favourite in a closely matched field after finishing second in a nursery handicap at Lingfield Park on December 30, his second start for Tony Carroll since transferring from Irish handler Kieran Cotter.

Fitted with first time cheekpieces, Kondratiev Wave was sent to the front by Doyle. Fleeting Prince (Charlie Hills/Kieran Shoemark) sat second on the outside, while the 6/5 favourite Amarillo Star (Charlie Fellowes/Hayley Turner) tracked the leaders on the rail.

Kondratiev Wave tried to kick away in the straight, although he could not shake off Amarillo Star, who appeared to be going best with a furlong and a half to race. The favourite moved through to lead passing the furlong marker but began to falter in the final 50 yards as Kondratiev Wave rallied gamely under a strong drive to get up near the line. The winning verdict was a neck, with a short-head further back to Fleeting Prince in third.

Carroll said: "I am delighted with Kondratiev Wave. He is such a tough customer and this track suited him much better today than Lingfield.

"He is a talented horse and I am delighted he has got his head in front. Hopefully, there is plenty more to come from him.

"Finals Day at Lingfield has to come under consideration now we have qualified, and we will make a plan once we see how he comes out of this."

Doyle, who has now won three Fast-Track Qualifiers this season, said: "It was a terrific performance from Kondratiev Wave. That is only his third run for Tony and he is improving all the time.

"He was so game in the closing stages and displayed a tremendous attitude when the other horses came to challenge.

"I am sure All-Weather Finals Day is on his radar - he has course form at Lingfield and he sees the six furlongs out really well too." 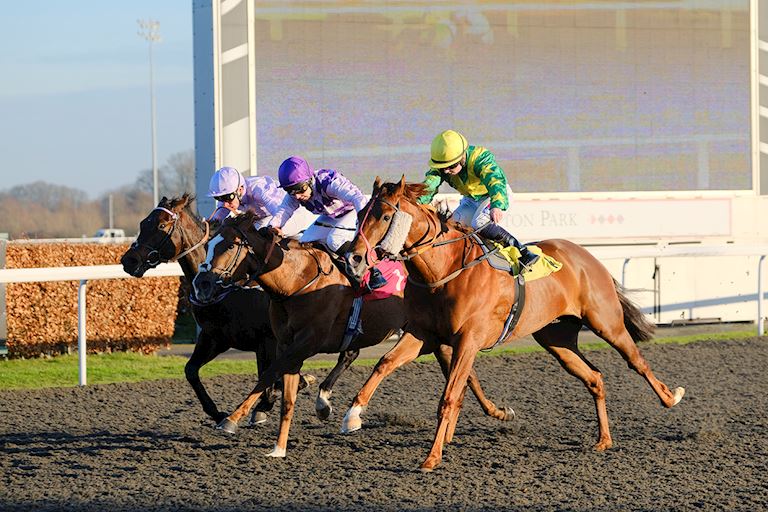 About the All-Weather Championships