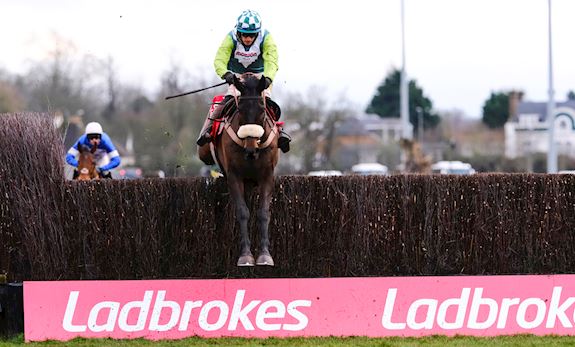 10 entries have been confirmed for the Ladbrokes King George VI Chase at Kempton Park on Saturday 26th December.

Clan Des Obeaux - the winner in 2018 & 2019 - will be bidding to join Kauto Star and Desert Orchid by winning a third consecutive King George VI Chase and is currently 15/8 joint-favourite to retain his title with sponsors Ladbrokes. Nicholls will be seeking a twelfth win in the race and is also represented by Britain’s highest rated chaser and last year’s runner up Cyrname. Frodon and Reel Steel make up the Nicholls team.

Monalee is the sole Irish runner for County Waterford trainer Henry De Bromhead. The nine-year-old was last seen finishing third behind Presenting Percy on his seasonal re-appearance at Thurles. Rachael Blackmore will be traveling over from Ireland to ride him at Kempton on Boxing Day.

Waiting Patiently will be hoping for better luck in this year’s renewal, having been brought down when travelling nicely in 2018. The Ruth Jefferson trained nine-year-old will be having his first run since finishing third in last year’s Tingle Creek Chase.

Tom George will be represented by Black Op, who finished ninth in the Ladbrokes Trophy at Newbury last month, whilst Harry Whittington could run Ryanair Chase runner-up Saint Calvados, following a spell on the sidelines with a bout of blood poisoning following an infection.

“It’s great to see such a strong line-up for the Ladbrokes King George VI Chase.

“We also have the likes of Altior, Epatante and Shishkin to look forward to. It’s going to be a brilliant two days of racing over the Ladbrokes Christmas Festival.”