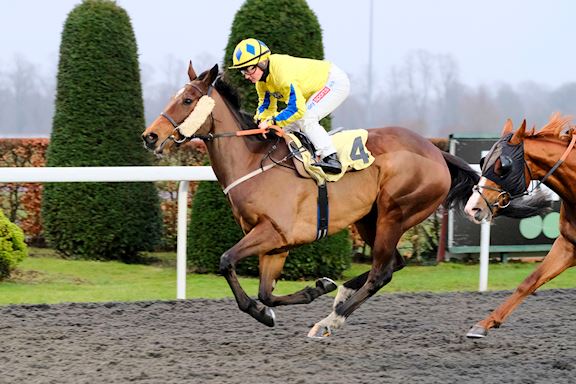 Hollie Doyle stole the show at Kempton Park as veteran campaigner Pearl Spectre helped her secure a first treble of 2021 with victory in division two of the racingtv.com Classified Stakes.

Last year was one to savour for Doyle, who became the first female jockey in British racing to ride five winners in a day at Windsor in August, along with celebrating a breakthrough Group 1 victory aboard Glen Shiel on British Champions Day at Ascot and a third place in the coveted BBC Sports Personality of the Year Awards.

Doyle worked her magic in the saddle once again in the mile contest, steering the Phil McEntee-trained 10 year old to glory by two and a half lengths to complete what she hopes will be the first of many trebles during 2021.

The 24-year-old jockey said: “That’s the first treble of the year, which is great. It’s great to ride a winner for Phil (McEntee) as they love that horse to bits, but it’s great to be riding winners and getting plenty of opportunities.

“It’s great he has got his mojo back and hopefully that will give him some confidence now. He is an absolute dude.”

Doyle had an added reason to celebrate her victory aboard the Street Cry gelding, who was winning for the first time since January 2019.

She added: “I actually broke my collar bone on him when I was an apprentice at Goodwood. He ducked out and that was it. I was going for the apprentice title and I had just got in front - then that put me out for three weeks. It’s good to get back on him and win on him, but he owed me one!”

Amtiyaz moved a step closer to All-Weather Finals Day at Lingfield on Good Friday when getting the ball rolling for Doyle in the Unibet 3 Uniboosts A Day Handicap, which the 5-4 favourite claimed by two and a quarter lengths.

Doyle said of the John Gosden-trained winner: “He didn’t do a tap when I got to the front but he deserved to win that as he had two near misses.

“The race was run to suit as he had a good gallop to aim at and that helped. He definitely stays two miles well but I think he is quite versatile trip-wise. I think All-Weather Finals Day is the aim if he is good enough to get there.”

First time cheek pieces had the desired effect on the David Elsworth-trained Something Enticing (6-1), who was winner number two of the day for Doyle when landing the Unibet 3 Uniboosts A Day Handicap by three quarters of a length.

After the mile contest Doyle said: “The cheekpieces helped but you can why she had them on. She is green and she just needs the penny to drop. The further she went the better she was.”

Highland Avenue (2-7) put his odds-on debut defeat at the track 52 days ago behind him on his first start over a mile when defeating stable mate Silent Film by five and a half lengths in the Unibet New Instant Roulette Maiden Stakes.

Alex Merriam, assistant to winning trainer Charlie Appleby, said: “He just run into one on his debut and he was a little bit green as it was his first time out. The step up from seven furlongs to a mile probably helped him and he was very professional today.

“Tom (Marquand) was very happy with him. Hopefully he will go on to bigger and better things but it is one step at a time.”

Hint Of Stars made it two wins from three starts since joining Kevin Philippart de Foy after backing up his last time victory at Newcastle with a front-running length and three quarter success in the Unibet Casino Deposit £10 Get £40 Bonus Handicap.

The Newmarket trainer said: “He enjoyed it in front and he was nice and relaxed. He ran very well here first time out and he stays this mile and a half well. The horse seems to love the all-weather and he is in great form this winter. He is very straightforward.

“The handicapper will put him up but we will make a plan and we might step him up in trip as he would get further.”