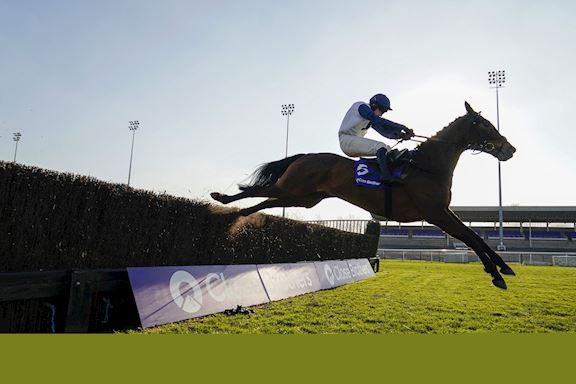 There were also three informative Grade Two contests, with Tritonic establishing himself as a leading contender for the Grade One JCB Triumph Hurdle with a 10-length success in the Close Brother Adonis Juvenile Hurdle, while the Grade Two Sky Bet Dovecote Novices’ Hurdle went to Cape Gentleman, handing a first Kempton Park success to Irish trainer Emmet Mullins. The Grade One Manifesto Novices’ Chase at Aintree is the likely target for Grade Two Close Brothers Pendil Novices’ Chase scorer Tamaroc Du Mathan with the Randox Topham Handicap Chase over the Grand National fences beckoning for My Way following his success in the Close Brothers Motor Finance Handicap Chase.

We sent Graham Clark to watch the action unfold …

The Grade One Betway Bowl at Aintree is on the agenda for Clondaw Castle after he handed trainer Tom George a third victory in the Grade Three Close Brothers Handicap Chase following Nacarat in 2009 and 2012.

In a race that was run at a strong pace the nine year old, who was fourth on his two previous Grade One starts in the 2019 Arkle at the Cheltenham Festival and Maghull Novices’ Chase at Aintree, was ridden with restraint by Johnny Burke to ensure he got the trip.

Taking the shortest route closest to the far side rail up the home straight, 17-2 chance Clondaw Castle moved into clear daylight on the run to last, which he measured safely, before prevailing by two lengths from Erick Le Rouge.

George said: “As a young horse he was always very keen and it was a question of restraining him. He has matured a lot. He was fourth in an Arkle, he won his bumper, novice hurdle. His owners have been incredibly patient as they have let me just tip along slowly, slowly and I’ve always said to them at the end of the day he is going to need three miles.

“They’ve let me wait to run him over three miles rather than push me. We wanted to wait and do it on a big day.

“Johnny said they were going so quick that he couldn’t have been closer. They went a fair gallop round there and he said he just had to sit tight, wait for his moment and once they started coming back to him he knew he had it under control.

“He was probably a bit unlucky in the Peterborough Chase but the ground was very soft that day and this is his ground. A flat track and three miles is his optimum I would have thought.

“He was off 154 today and that puts him into graded class which we always thought.”

A return to Grade One level appears most likely for Clondaw Castle, who holds an entry in the Grade Three Ultima Handicap Chase at The Festival™ supporting WellChild, with George keen on the idea of running him in the Betway Bowl, a race he claimed with Nacarat in 2011.

He added: “He is in at Cheltenham (Ultima Handicap Chase) but in the back of my mind I had it he would go from here to Aintree. He will be a fresh horse.

“Nacarat won this and won a Grade One there (Aintree). He has had a good long break before today and he should keep on improving. He will be off a mark of 160 by Aintree and that (Betway Bowl) is where we should be going I would have thought.”

Tritonic secured his ticket to the JCB Triumph Hurdle at The Festival™ supporting WellChild in impressive fashion after maintaining his unbeaten record over jumps in the Close Brothers Adonis Juvenile Hurdle.

The gelded son of Sea The Moon proved a cut above his rivals when following up his debut success over hurdles at Ascot 35 days ago in the manner of a horse with plenty more to give to provide winning trainer Alan King a record-equalling fifth victory in the Grade Two event.

Buried amongst runners early on the 5-6 favourite, who finished second in the inaugural running of the Golden Gates Handicap at Royal Ascot, eased into contention to move on with his old adversary Casa Loupi on the run down to the penultimate flight.

Although meeting the penultimate flight slightly wrong, Tritonic landed with the plenty of momentum to quickly assert into a clear advantage before crossing the line 10 lengths clear of Casa Loupi.

King, who last completed the Adonis and Triumph Hurdle double in 2005 with Penzance, said: “We wanted to get a bit more experience into him before Cheltenham and he will have learnt plenty going down the inside today. Once or twice, he has gone to sleep but as soon as Adrian (Heskin) has given him a squeeze he is straight back on the bridle.

“I couldn’t be more pleased with him. We gave him a proper holiday at the end of the last Flat season. He was gelded then he had six weeks in the field and he was just ready to start at Ascot. I just felt we had to get two runs into him if we were going to be a serious Triumph horse. We certainly felt he had improved since Ascot fitness wise and he has built on that again today.

“Everything impressed me today. The way he came back on the bridle as he was short of room once or twice and I loved the way he went away from the last. He hit the line really well which is a good sign. From day one he has schooled lovely. Ascot he as pretty good, he was long and flat at the last but he has had two good schools since then and today I thought his jumping was very accurate. He is good when he is in tight as well.”

Assessing Tritonic’s chances in the JCB Triumph Hurdle the Barbury Castle Stables handler, who is seeking a first success at the meeting since Uxizandre in the 2015 Ryanair Chase, believes his latest stable star holds strong claims of changing that statistic.

He added: “I think the two runs, and he has got plenty of experience on the Flat so he should be okay (at Cheltenham). He is the highest class Flat horse I’ve ever sent jumping.

“He should be fine for that (Triumph) and he has got the gears to hold a position wherever you want to ride him.

“I hope he has a good chance. He would be the highest rated of them Flat wise (in the Triumph). I certainly wouldn’t want to swap him for anything but Gordon’s horses have looked extremely good as well. I’m very happy with my lad.”

Irish trainer Emmet Mullins was unable to be at Kempton Park for his first victory at the venue but he has a very bright prospect in Cape Gentleman takes Grade Two Sky Bet Dovecote Novices’ Hurdle.

Last season’s Irish Cesarewitch winner entered the Grade Two contest with something to prove after pulling up on his Grade One debut over 2m6f at Leopardstown having previously made a winning debut over hurdles at Punchestown.

Although holding every chance out in front under Jonjo O’Neill approaching the last in the two mile event the 5-2 chance looked a set to be picked up by Calico, who was bidding to follow up his debut win over hurdles last month.

After being headed by Calico up the run Cape Gentleman, who holds entries in the Ballymore Novices’ Hurdle and Albert Bartlett Novices’ Hurdle at The Festival™ supporting WellChild, dug deep to rally back in front near the line before claiming victory by three quarters of a length.

Jonjo O’Neill, winning rider, said: “It was a very good training performance. He has only had two runs. He ran poor the last day but the considerable drop back in trip has helped him, although I definitely think he is a two and a half miler.

“He loved the ground and he was very straightforward today. He battled hard again after the last. I’m delighted with the performance. Emmet said he was in good form at home and every now and again they can have blips every now and again.

“He is in the Albert Bartlett and Ballymore and it looks like the Ballymore would be an obvious one.”

After finding only Arkle favourite Shishkin too strong at the track over two miles at Christmas, the Johnny de la Hey-owned six year old appeared to appreciate the step back up in trip after running out a ready winner of the Grade Two contest.

Sitting just off the early pace for much of the extended two mile four event, the Evens favourite moved into a lead he would not surrender over the penultimate fence before surviving an error at the last to defeat Ga Law by three and three quarter lengths.

Nicholls said of the successful six-year-old: “We hoped it was the right race for him. It is the first time he has won over two and a half but he got the trip nicely. He jumped nicely and loves good ground that was perfect. He has got plenty of scope. I think it surprised Harry (Cobden) as he came out of his hands as he thought he would go in a bit closer but it showed you he had plenty of energy left. He is only a novice and that is his third run over fences. He is still learning.

“I’d suspect he will go to Aintree for the two and a half mile novice chase (Manifesto Novices’ Chase) or to Ayr the weekend after for the Future Champions Novice Chase. I don’t see him going to Cheltenham. It is a nice race to win en route to Aintree or Ayr. A flatter track suits him. He is the sort of horse you could look at the Silviniaco Conti Chase back here over two and a half next season.”

A spin over the Grand National fences in the Randox Topham Handicap Chase is one option for My Way, who completed doubles for Paul Nicholls and Harry Cobden with a front running two and a quarter length success in the Close Brothers Motor Finance Handicap Chase.

Nicholls, who teamed up with Cobden to claim Grade Two glory with Tamaroc Du Mathan in the Pendil Novices’ Chase, said: “I was getting a bit frustrated with him being second and running and getting beat. He ran okay at Chepstow on heavy ground and he wouldn’t have liked that ground. The blinkers have sharpened him up and I would have been disappointed if he got beat today.

“I would run him over those fences if he got in (Topham) and it would not surprise me at all if that is the race he goes for. There is a two and a half mile handicap at Ayr as well. I’ve put him in at Cheltenham to get balloted out for the consolation chase here.”

Not sighted since finishing seventh in the re-arranged EBF Final over course and distance 350 days ago, the six year old demonstrated he was match fit first time out after proving three and a quarter lengths too strong for Ecco.

Stuart Edmunds, winning trainer, said: “He has got some good form. He just had a bit of a problem with a knee and we never really got to the bottom of it. We just had to lock him up, touchwood he hasn’t had a problem since.

The card concluded with the Close Brothers Premium Finance Standard Open National Hunt Flat Race, where 3-1 favourite Guardino built on the promise of his debut at Carlisle to take the honours for trainer Ben Pauling and jockey Nico de Boinville.