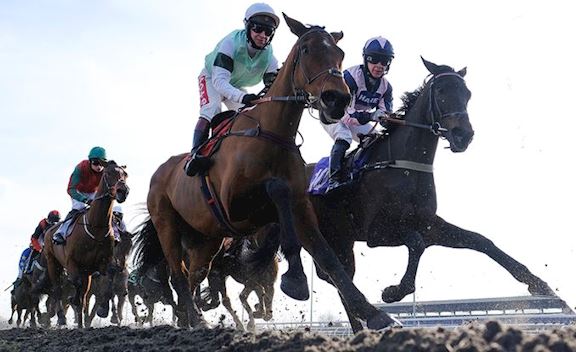 Fergal O’Brien was among a number of trainers to praise Kempton Park for staging a Jumpers’ Bumpers fixture at short notice today (Thursday 11th February), after Golden Taipan opened his account for the season. 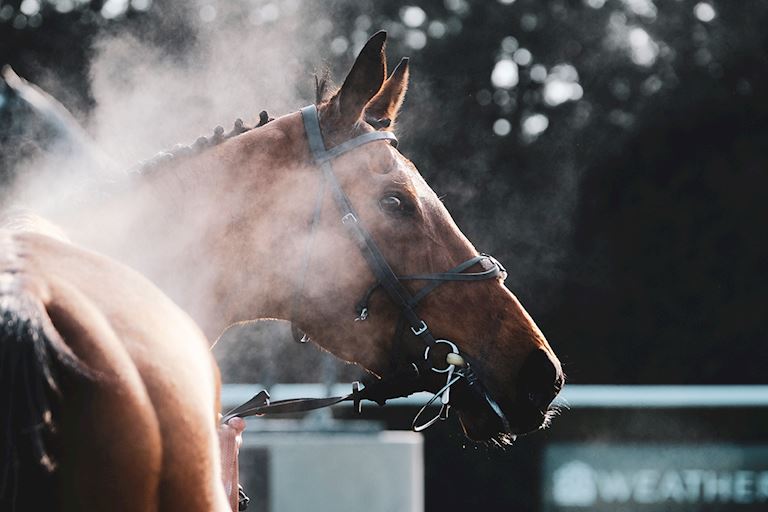 The nine race card was only announced on Tuesday after officials at the course were forced to abandon tomorrow’s (Friday 12th February) scheduled jumps meeting due to part of the track being waterlogged.

Despite the quick turnaround, the meeting saw more than 100 runners declared, including Golden Taipan, who defeated long time leader Millers Bank by half a length in division one of the Vbet “Jumpers ‘Bumper” National Hunt Flat Race.

Referring to his winner, O’Brien said: “That was lovely that lad there and he has done it well. It is great for Kempton to put these on and it is great for the owners as they have got something to watch.

“That lad has been pretty consistent over fences, maybe a little bit disappointing last time at Taunton, but he has been very good. He showed a great attitude and hit the line well. He has got options but we might try and qualify him for the Challenger Series at Haydock.”

Fellow trainer Warren Greatrex, who was on the mark after Young Lieutenant ran out a two length winner of the Download The Vbet App “Jumpers’ Bumper” National Hunt Flat Race, was equally grateful for the fixture being staged.

Greatrex said: “It’s a great initiative. All the ones I’ve run here want slightly better ground so it’s a great chance to get them out at this time of year.

“It’s great for the owners as well as although they can’t attend the meetings they can still watch their horses race on the television.”

Of his 20-1 winner he added: “He was going to go novice chasing at Musselburgh last week but the ground was rubbish so he will go novice hurdling for the rest of the season.

“He is a very good jumper of a fence. He is not the easiest to train as he has bad feet, but he has lots of ability.”

Meanwhile Harry Whittington ended his 91 day wait for a winner after Sheila Nash, who is named after the trainer’s grandmother, prevailed by a neck in the Vbet Promotes Responsible Gambling Mares’ Standard Open National Hunt Flat Race.

After the 9-1 shot’s victory, Whittington said: “It was great to get back in the winner’s enclosure as we have had a tough couple of months.

“I’m delighted for Chris Nash (owner). She is named after my grandmother who is Chris’s mother so it is quite special. You can always rely on granny to get you out of trouble!”

There was little to choose between the first four in the Be Better Be Vbetter “Newcomers” Standard Open National Hunt Flat Race, which went the way of the Philip Hobbs-trained Chalgrove (11-4) by a short-head.

Winning jockey Richard Johnson said: “I got left a little bit flat-footed turning in but he has picked up really well when I’ve asked him. He has shown a great attitude and will hopefully learn plenty from today.”

Having secured a double at the track on Tuesday, trainer Paul Nicholls and jockey Harry Cobden had to make do with the success of Tomorrow Mystery, who landed the Play Golden Shot At Vbet Mares’ “Jumpers’ Bumper” National Hunt Flat Race by two and a half lengths.

Harry Derham, assistant trainer, said: “We just did this as she had a little spin on the Flat before she won at Newbury. I’d imagine in three weeks’ to four weeks’ time we will find a nice race over hurdles. Her Flat speed is what has won it today.”

After staging an eight race Jumpers’ Bumpers fixture only 48 hours earlier, clerk of the course Barney Clifford praised the work of his groundstaff team in helping to get both meetings on.

He said: “At the end of last week it indicated it was going to be cold. We staged a Jumpers’ Bumpers card on Tuesday then offered to have another on Thursday.

“I’m deeply grateful to the team for pulling together in what has been a busy period.”