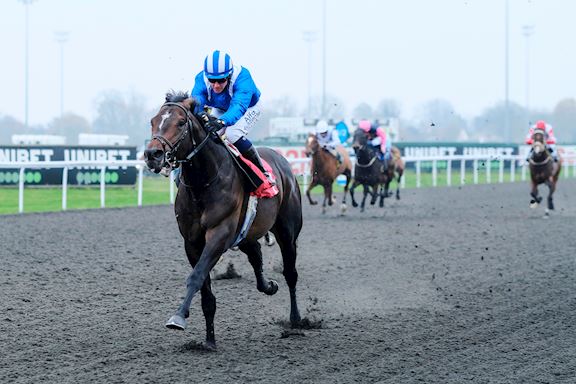 William Haggas hopes Al Zaraqaan can prove good enough to defy top weight and continue his progression by making his return to action a triumphant one in the Ladbrokes Roseberry Handicap over a mile and three furlongs at Kempton Park tomorrow.

The son of Golden Horn has come a long way since beating only one home on his sole start as a two-year-old at Newmarket in 2019, having rattled up a hat-trick of victories last year following wins at Doncaster, Kempton and at Lingfield Park in December.

With a return to the Sunbury track expected to suit Al Zaraqaan much better than the one at Lingfield Park, the Newmarket handler is optimistic of another solid performance from the improving four-year-old.

Haggas said: “He is an improving horse and he should run a good race. It was only a novice he won around here before and this is a different test altogether.

“He ran a good race at Lingfield but this track would suit him much better. He has run well after a break before but he might just need it.

“I hope he can go on from here though and carry on progressing.”

David Menuisier expects Soto Sizzler, who finished fifth in the 2019 renewal when trained by William Knight, to take a big step forward when making his first start in 554 days on his belated stable debut.

Menuisier said: “He has been with me for about five months but unfortunately he sustained a serious injury after his last run in 2019 and he had to have the year off.

“As William Knight was moving to Newmarket, his owner was local and he decided to keep the horse down here and lucky for us we got him.

“We will just take our time with him as his main targets will be in the summer as he is a fast ground horse. He has done a fair bit of work but I’m under no illusions that he is going to need the run. He is a classy horse but I genuinely don’t know what to expect.

“He won a big handicap on Derby Day in 2019 and the Great Metropolitan Handicap and all being well we can go for that in four weeks’ time.”

Master The Stars has race fitness on his side after finishing third at the track on his yearly return 24 days ago and trainer Ed Dunlop is confident the four-year-old can build on that effort.

Dunlop said: “It is a typically competitive race but he had got a nice draw in stall two. I was pleased with his first run back there last time though he would have needed it and it was his first since being gelded. He is in good form and hopefully, he can go well.

“He needs to improve again but he is lightly raced and he is fine on the All-Weather surface as he has been around it a few times.

“We did look at the mile and a quarter race at Doncaster on Sunday for him but we decided to come here as it was a race we had on the back of our minds.”

The John and Thady Gosden-trained Almighwar saw his hat-trick bid come unstuck at the track on his latest start in October. However, connections feel the Dubawi colt is capable of resuming his progression on his return. Almighwar is out of Sheikh Hamdan Al Maktoum 2014 Oaks heroine Taghrooda and there would be no more poignant winner following the owner-breeder’s death, which was announced on Wednesday.

Thady Gosden said: “He has always been a nice horse and he is from a very good Shadwell family out of Taghrooda. He is a horse that will hopefully have improved with another winter on his back. It didn’t happen for him the last day there but hopefully, he has made that natural progression from three to four.”

Jockey Rab Havlin reports Almighwar to be in good order ahead of his latest assignment having partnered him in work on gallops leading up to his return.

He added: “He was beaten off a mark of 94 but he will have sharpened up mentally for that. We will probably see him going further in the future but this is a good starting point and he has been training well. I’ve ridden a couple of bits of work on him and he is in good shape.”

Clive Cox hopes Streamline can follow up his recent Wolverhampton success by making a return to the scene of his Group Three victory in the 2019 Sirenia Stakes a winning one in the Ladbrokes Where The Nation Plays Handicap over six furlongs.

The Lambourn handler said: “He did well to win last time as it was a competitive race. He missed his three-year-old season as he sustained a tendon injury. I was delighted to see him come back and show the same sort of form he had as a two-year-old.

“He went up three pounds for his last win and he will run without a hood this time which is something I was keen on doing at this stage of the game. He had a steady build-up coming back off an injury like he had and he showed last time he was much better for a run or two. We know he has good track form and I’m very pleased with him.”

Ed Walker believes the drop back to six furlongs can unlock further improvement from stable newcomer Great Ambassador, who is bidding to score for the first time since claiming a novice contest at Chelmsford in November 2019 for Ralph Beckett.

He said: “He is an interesting horse. He had a few hiccups last year but he looks to be a lovely horse. We are bringing him back in trip as he is showing me a lot of speed at home and his pedigree suggests he is not short of speed. He has got a great temperament and hopefully, we can get off to a good start with him. He has been freshened up after a break and in sprinting terms, he is still young. Hopefully, he is a good addition to the team.”