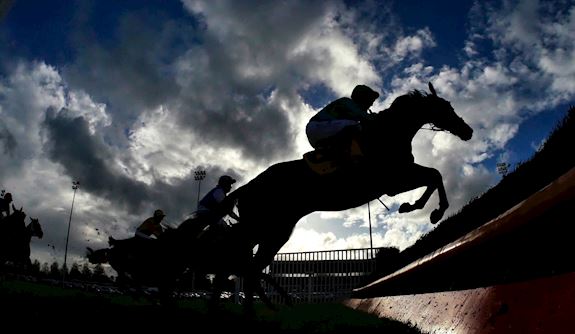 Sam Drinkwater believes Nightboattoclyro has a ‘massive chance’ of completing a four-timer in the Virgin Bet Silver Plate Handicap Hurdle at Kempton Park tomorrow - provided he copes with the quicker ground.

Having missed the cut by one for the Martin Pipe Conditional Jockeys’ Handicap Hurdle at The Festival™ supporting WellChild the seven year old, who is unbeaten in three starts since joining Drinkwater from David Dennis, will seek to gain compensation in the 2m 5f contest.

With his victories at Doncaster, Chepstow and last time out at Wetherby all achieved on soft ground, Drinkwater hopes that the Sulamani gelding can continue his progression by proving equally as effective on a sounder surface. The going at Kempton Park is currently Good, Good to Soft in places.

Drinkwater, who is based in Worcestershire, said: “I was hoping he would get into the Martin Pipe. He was second reserve and the first reserve got in. I was praying all night he in but he didn’t so there is no point losing too much sleep over it.

“He has won his last three starts on big galloping tracks with soft or heavy in the going description and Kempton is a tight track and the ground is drying out. He is in good nick and as long as Kempton suits he has got a massive chance of completing the four timer.

“He had to dig deep from the back of the last at Wetherby last time which was nice to see but he is the sort of horse that doesn’t do much in front.

“The owners have given me every bit of time with him and there has been no rush and they’ve been rewarded.”

In the same contest, Nick Gifford hopes former Listed bumper winner Didtheyleaveuoutto can build on a couple of confidence boosting All-Weather runs at the track and put in a clear round having fallen on each of his last three starts over jumps.

He said: “Didtheyleaveuoutto is in great form and he will love the ground but we just need to see a clear round from him. He jumps brilliant at home but for whatever reason he has not put it together on the track for quite a while.

“I thought he was running a massive race at Chepstow back in October but he just stepped on one otherwise I think he would have gone very close that day.

“We are stepping him up in trip but we always thought he would be a two and a half mile horse. It is a competitive little race but we have kept him back for this better ground.”

Johnny Farrelly expects the return to better ground and the step up in trip to play to the strengths of Breffniboy, who is seeking a sixth win this campaign, having failed to get home in testing conditions in a Listed race at Exeter last time out.

The Somerset trainer said: “He travelled probably too well on the ground in the Listed hurdle at Exeter where it was heavy. He is back now at Kempton where he has won before and the ground will be better and the step up in trip should suit.

“I think this season he has just got a bit stronger and more mature. It is amazing what winning one race can do for their confidence, though I never thought he would be a 130 rated horse. Hopefully he will run well again but he has already done well this season.”

Philip Hobbs hopes Smarty Wild can make it two wins from in as many starts at Kempton Park in the Virgin Bet Handicap Chase over an extended two and a half miles.

After scoring over course and distance on his penultimate start in January, the seven year old had to settle for fifth last time out behind Two For Gold at Warwick.

Hobbs said: “The main reason why we are running is that he is a course and distance winner. He will enjoy the decent ground and we know he likes the trip so hopefully things are in his favour.

“He was probably a bit unlucky in running at Warwick last time as he met with interference which was not ideal. He is a very straightforward horse to deal with at home and hopefully he will go well.”

Among those lining up in opposition is the Chris Gordon-trained Mellow Ben, who will be dropping back in both trip and class having finished seventh in the Grade Three Close Brothers Handicap Chase at the track over three miles on his latest appearance.

Gordon said: “He seems to have shown plenty of pace in his last two races and we think this step back in trip might help him see his race out better.

“I was going to wait for the Sussex Champion Chase at Plumpton but then this race came up so we thought we would have a go.

“He is a good moving horse so the better ground is better for him. He is a horse that is quite busy at home so he keeps himself quite fit though I have given him one little bit of work to get him ready for this.”