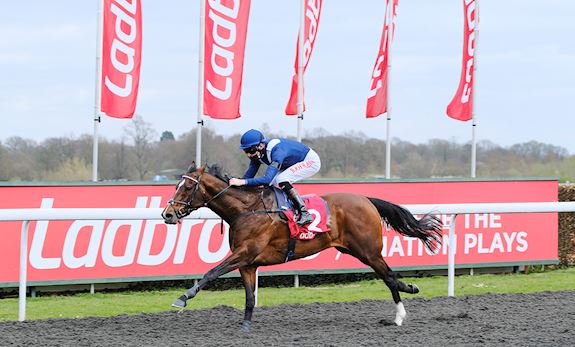 Global Giant will be aimed at Group race targets once again after getting his career back on track in emphatic fashion when completing a quick-fire 5.9-1 double for John and Thady Gosden in the Ladbrokes Magnolia Stakes at Kempton Park today.

After failing to make an impact on the dirt in the Saudi Cup in Riyadh last time out, the six-year-old son of Shamardal proved a cut above his rivals on first start in Britain this year when claiming the feature mile and a quarter Listed prize.

Tracking the early pace set by Faylaq the 8-15 favourite quickly asserted once sent on just outside the furlong pole before passing the post six lengths clear of Stormy Antarctic, which also completed a double for winning rider Rab Havlin.

John Gosden said: “He needed a confidence booster. He got the worst of the dirt down on the inside in the Saudi Cup and it is hard for them to face it when they are not used to it whereas Mishriff was lucky as he had an outside draw in the race.

“He was unfortunate in the Bahrain International Trophy where he got badly left in the gate and was flying at the finish. He was in front after the line but not on the line.

“He is a lovely horse that belongs to Sheikh Isa and I will talk to him but we might have a look at the Earl Of Sefton at Newmarket next month. It would be nice to get a Group race win into him.

“He took the travelling to and from the Saudi Cup fine. From a wide draw, he would have got a piece of it. With a lot of horses like him now if there is attractive prize money abroad, they will go for it as it is logical.”

Otyrar got the ball rolling for the Gosden and Havlin when making his third racecourse appearance a winning by a length and a half in the opening Watch Racing Free Online At Ladbrokes EBF Novice Stakes.

John Gosden said of the 7-2 winner: “Apart from the shenanigans going into the first bend it was a straightforward race. We are happy with him and he has learnt from his last run.

“The mile and a quarter here on the inner track you have to be in a reasonably good position if they slow the pace up which they often do down the back.

“We are very happy with him and he is learning the game. I think we will stay at a mile and a quarter but he will probably get a mile and a half in the end.”