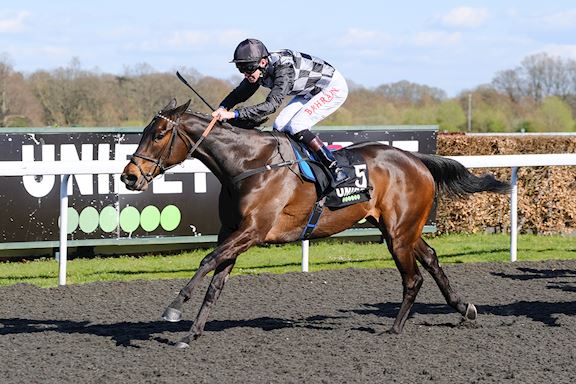 With the Jump Racing season building towards a crescendo in less than three weeks’ time the action on the Flat is winding up nicely before the first Classic races of the season next month.

A seven race card at Kempton Park, sponsored by Unibet, entertained viewers of ITV Racing and Racing TV as well as connections who were lucky enough to be in the sunshine at the track. We sent Graham Clark to review the action and speak to the winners on the day…

Lavender’s Blue moved a step closer towards fulfilling her famous owner Benny Andersson’s dream of winning the Nassau Stakes at Goodwood by claiming victory on her return in the Unibet Snowdrop Fillies’ Stakes.

The Sea The Stars mare, who is owned by the ABBA star, gained a first success since landing a Group Three at Sandown Park in August 2019 with victory in the mile feature race to secure a double on the card for winning rider Rab Havlin.

After racing prominently with Fooraat for much of the contest the 3-1 favourite gained the upper hand in a late battle with the Roger Varian-trained four year old before prevailing by a length and a half.

Trainer Amanda Perrett said: “We never got on the right leg with her after the first lockdown last year and the ground was always a bit tacky for her. She has been training really well and she showed she liked the all-weather at Lingfield.

“The girl who rides her at home has been really pleased with her. We’ve had a good run in and that is great to get her back on the board again as she is a very talented filly. That will do everybody’s confidence and general happiness the world of good to do that today.”

We’re only five days into April but John and Thady Gosden might have unearthed a potential Royal Ascot performer in Mostahdaf, who maintained his unbeaten record in the Unibet 3 Uniboosts A Day Conditions Stakes.

The Frankel colt, who is a half brother to Group One winner Nazeef, made it two from two after following up his debut success over seven furlongs at Newcastle when taking a step up to a mile in his stride under Rab Havlin.

Receiving a nice tow in to the race, the 10-11 favourite, who holds an entry in the Group Two Al Basti Equiworld Dante Stakes at York, got a perfect run up the far side rail before rallying well to defeat last time out course and distance winner Imperial Sands by half a length.

John Gosden said: “This lad is not a Guineas horse. He is a nice horse and a progressive mile and a quarter horse. He was a little babyish still and he was a little restless in the gate, but we will work on that.

“He is the type of colt that I see as a mile and a quarter horse, he might be good enough for the Hampton Court at Royal Ascot after one more run. The race worked out perfectly. He was drawn in one and he had the cut away. That (Dante) is a bit grand but we will see and I’m very happy with him.”

DOYLE’S ONE FOR THE ROAD DENIES KESTENNA A HAT-TRICK

Lilac Road made the most of a significant drop in grade to get her career back on track, securing a front-running success in the Unibet “You’re On” Fillies’ Conditions Stakes.

Having failed to beat a single rival when last seen in the Group One Fillies’ Mile at Newmarket in October, the William Haggas-trained daughter of Mastercraftsman appeared to appreciate the return to calmer waters on her all-weather debut in the mile prize.

Although hat-trick seeking odds-on favourite Kestenna ranged up as big danger down the home straight, Lilac Road was not for passing under James Doyle, who was deputising for Cieren Fallon, with the pair pulling out plenty to score by three and a quarter lengths.

Maureen Haggas, wife and assistant trainer, said: “She was a bit fresh today and silly going out but once she got out the gates and racing she was great and she stretched on well.

“The Fillies’ Mile was a race that was probably a bit too good for her but at that time of year it was worth taking a chance and having a try. She was fourth in the May Hill before and ran well. She is a good solid filly that I’d probably stick at a mile with for the moment.”

Richard Hannon celebrated his first two year old winner of the season as Dukebox showed an admirable attitude to land the opening race on the card, the Play Slingo Starburst At Unibet/EBF Novice Stakes.

The Holy Roman Emperor colt, who Hannon also owns a quarter of, made his racecourse debut a triumphant one in the five furlong contest when battling back after being headed late on to defeat favourite Meng Tian by a head.

Hannon said of his 9-2 winner: “He is out of a mare we used to train called Broadway Duchess. He is a very nice horse but he definitely wants six furlongs.

“You’ve got to say he has a lovely attitude, the way he stuck his head out and came back, as a lot of horses would have given up. I’d imagine he would run under a penalty next.”

Without a success to his name in more than 18 months, Roger Charlton might not have been expecting a victory for Sleeping Lion, a winter recruit to the trainer’s team for the 2021 season.

But the six year old Teofilo gelding returned to form to collect the two mile Unibet 15 To Go Queen’s Prize Handicap and make his stable debut and first start for 206 days a winning one.

Victory looked to be heading the way of Postileo, but he was picked up late on by the 9-1 chance who put his assured stamina to good use before obliging by two and a half lengths.

Charlton said: “He is very genuine and tough and it was really very satisfying. We’ve had him during the winter and done a few different things with him.

“He got stopped in his run for a little bit and for a long striding horse that is not the easiest thing but that was really pleasing. James (Fanshawe) did a good job with him but with those older horses sometimes a change of scenery can help.”