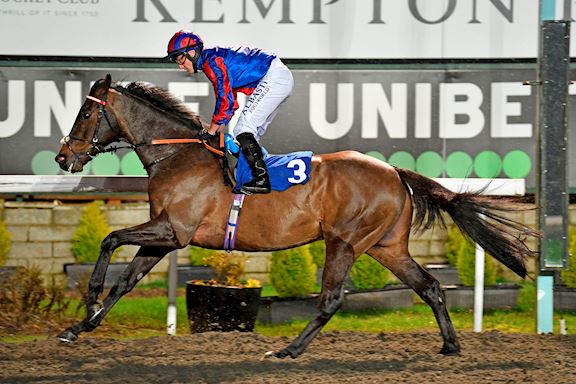 Charlie Fellowes reports Prince Of Arran to be “a different horse” to the one that suffered a hat-trick of defeats earlier in the year as he attempts to make it third time lucky in the Unibet September Stakes over a mile and a half at Kempton Park tomorrow (Saturday 4th September).

Having finished third in the Group Three contest for the past two years the globe-trotting Shirocco gelding will bid to go two places better on Saturday and claim his first victory since landing the 2019 Geelong Cup in Australia.

He finished third for the second time in the Melbourne Cup at Flemington in November, a race in which he also filled the runner-up spot in 2019, but the eight year old has failed to feature in any of his three starts in 2021.

Despite Prince Of Arran beating only one home last time out in the Group Three Sagaro Stakes at Ascot in April, Fellowes is confident of an improved display from his stable stalwart, who will be partnered for the first time by Rossa Ryan.

Fellowes said: “Prince Of Arran is in great form. Jamie Spencer rode him last week and said he felt a completely different horse to the one he rode in the spring. He seems in a much happier place mentally.

“He just needed time to get over his runs in Australia as they took a lot out of him. He likes Kempton but hates it when there is no pace in the race. It looks like there will be some pace as hopefully Archie’s horse (Outbox) will go forward and give the race a decent gallop.

“If they go a nice gallop he will run a nice race as he seems in good form. Rossa Ryan is on board for the first time. His agent rang up three times in the build-up to the race wanting the ride, which is nice to see.

“He loves Kempton and looking at the race Hukum will be difficult to beat but I would like to think he will be in the mix if he runs up to form and he should be in the first three.”

Trainer Owen Burrows is confident Hukum can defy a Group Three penalty picked up for his victory in the John Smith’s Silver Cup at York for the second race in succession, having recently proven a ready winner of the Geoffrey Freer Stakes at Newbury.

He said: “This looks another nice opportunity for him all being well and he won around Kempton as a two year old.

“He has got the penalty again but he had that at Newbury and we go there very hopeful.

“We were going to go to France last weekend but then we found a bit of mucus during a scope. As it turned out there was no infection so we didn’t lose any time with him. We knew we had this race there if he was okay.

“He did a little bit of work on Wednesday and we were very happy with him and there were no signs that he should not be running.

“He has already won two Group Threes and a Listed race this season but hopefully there is still a bit more to come.”

Quick ground forced William Haggas to swerve an outing in the Ebor at York with the long absent Hamish, however the Newmarket handler believes this represents a suitable starting point.

The gelded son of Motivator has not been sighted since finishing fourth in last year’s Group Two Hardwicke Stakes at Royal Ascot 442 days ago.

But Haggas said: “I wanted try and win the Ebor with him but unfortunately the ground wasn’t right for him. I could have run him if I wanted to but we want to look after him.

“It was a tendon injury that he picked up but he has had a clear run now. The conditions here will be suitable and I just want to get a run into him now.

“Hukum is likely to win but this is a nice place to start and he will come on for whatever he does.

“I think he is in pretty good shape considering he has been off for a long time. It was a good run he put up in last year’s Hardwicke Stakes from a moderate position and he came home well that day, while his three year old form stacks up nicely.”

Kevin Phillipart De Foy believes it is worth “taking a punt” with Scot’s Grace, who will bid to follow up her debut victory over course and distance in July in the Unibet 3 Uniboosts A Day Sirenia Stakes, staged over six furlongs for two year olds.

He said: “I’ve been a bit unlucky as she needs fast ground. She has had a couple of entries over the summer but the ground has turned against her.

“The filly has been in great form ever since her impressive course and distance win. She handled the track there first time out so we thought this was worth taking a punt and see how she gets on in the race.

“I never put my fillies under too much pressure at home and we will learn a lot more on Saturday.

“I was confident she would run a good race first time out as she was showing some nice work at home.

“I knew she would run a good race but I didn’t think she would win by four and a half lengths. She has improved a bit but she will need to on Saturday.”

Hugo Palmer feels the hat-trick seeking Hierarchy has plenty going for him in the six furlong contest. The Mehmas colt successfully followed up his winning debut at Wolverhampton with victory in a novice event at Salisbury 11 days ago.

Palmer said: “His heart is in the right place and he seems to be improving as a two year old. He is showing the general public what he can do in the afternoon opposed to showing it in the morning as he definitely saves his best for racing.

“He handles the surface, has a nice a draw and has got the momentum behind him.

“He is very much a two year old and though I’m not saying he will not make it at three, he would need to grow and develop.”

Dave Loughnane expects Fearless Angel to appreciate the step up judging by her staying fifth over five furlongs in a Listed event at Newbury last time out.

He said: “She has done everything right since she has come to us. She was unlucky not to get a bit of Black Type last time.

“She was a fraction slow away and she didn’t get into stride straight away so she had to sit and suffer but she hit the line strongly.

“I think the all-weather will suit her and six furlongs won’t be a problem. We are hopeful of a good run.”

Charlie Fellowes believes he has found a good opportunity for Eve Lodge to prove she is a stakes class filly.

He said: “She is very good and is better than she has shown on her last two starts. If you go back to her race at Lingfield she didn’t just beat a good filly but demolished her.

“At Royal Ascot I think you can forgive any horse as that ground was horrendous and it was a bit too much too soon in the Albany.

“The ground at Yarmouth was way too quick and I had a gut feeling it would be.

“Jamie Spencer and I are convinced she is a stakes class horse and this is a good opportunity to test her at that level again. She has got a great draw in stall one and six furlongs will be no problem for her.”