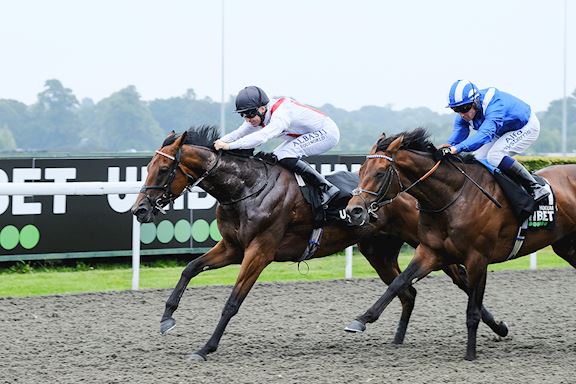 An absence of 442 days was no inconvenience to Hamish, who took the honours in the feature race at Kempton Park today (Saturday), the Group Three Unibet September Stakes over a mile and a half.

The five year old Motivator gelding, trained by William Haggas and running in the colours of his father Brian, was delivered perfectly by Pat Dobbs inside the final furlong to upset 30-100 favourite Hukum by a neck. The winner was returned at 9-1.

Maureen Haggas, assistant trainer to her husband, said: “I didn’t think we’d beat Hukum, I must say. He was fit and well but has obviously been off the track for a long time and was a bit fresh and gassy today.

“It’s been a real big team effort to get him back. Laura Thomas did all his treatment and rehab for his tendon injury with the vet Jeremy Swan, and Andrew Tinkler has ridden him a lot at home.

“He’s a talented horse. He had great form as a three year old and ran a really good race in the Hardwicke last year, where unfortunately he picked up his tendon injury.

“It was great for the family to get a Group winner. He needs soft ground and we ran him today as we needed to get out and give him a race as he was ready to go. It’s a kind surface here – we couldn’t run him at York in the Ebor as it was too fast. He needs rain so he will run where it rains. We aim at the stayers’ race on Champions Day at Ascot and work back from that.”

Winning jockey Pat Dobbs added: “We went very slow and he didn’t really relax properly but he’s always been a class horse and the surface suited him well.

“He’s a soft ground horse and this sort of track rides a bit slow, so it was ideal for his first run back.”

Eve Lodge battled well to land the other Group Three contest on the card at odds of 16-1, the Unibet 3 Uniboosts A Day Sirenia Stakes, staged over six furlongs for two year olds.

The daughter of Ardad was delivered with her challenge two furlongs out by Jim Crowley and battled well to take a narrow advantage entering the final furlong. She kept finding more and held on gamely to take the honours by a length from 15-8 favourite Wings Of War.

It was an emotional moment for winning training Charlie Fellowes, who was enjoying a first domestic victory in a Group contest.

“I’ve always believed in this filly. She was really good on debut and even better on her second start. She was probably still just a bit weak at Ascot and struggled to get through that horrendous ground.

“Then we were disappointed at Yarmouth but maybe we shouldn’t have been disappointed as the winner went and won a Group Three on Thursday (Romantic Time, who won the Dick Poole Fillies’ Stakes at Goodwood).

“It was lovely to see her go and do that today. It’s not easy this game and my team of Harriet, who rides her every day, Mike my assistant, Kelly and Cheryl - they all work so, so hard. I know this will mean a huge amount to everybody back at the yard – equally as it means to me.”

Reflecting on achieving a first success in the UK at Group level, Fellowes continued: “I am incredibly proud of what we have achieved so far but when there is a monkey on your back like this one has been, you can’t help but think about it every time you go and run one.

“I am delighted that we have put that one to bed and I am delighted that George Scott can never mention it again! I am also delighted for her owners (US-based Mathis Stables LLC) who bought her after her first win and that she has repaid their faith and my faith in her. I do think she is a very good filly.”

Looking ahead to the future, Fellowes said: “She is a good size and I am sure she will train on next year. I think she idled a bit in front and could have done with something helping her out a little bit more. I’d be very confident there is more to come.

“She hated the ground at Ascot. Ardad’s generally want a bit of cut in the ground and she doesn’t want rattling ground, which it can be at Yarmouth and in hindsight it was a better run than we thought.

“I’m kicking myself I didn’t put her in the Cheveley Park, although maybe that would have been a step too far at this stage. I’ll get back, have a chat with the owners and see where we go from here. I wanted to get today out of the way before making any further plans.”

Later in the afternoon Fellowes announced that his stable stalwart Prince Of Arran, who finished last of five in the Unibet September Stakes, has now been retired.