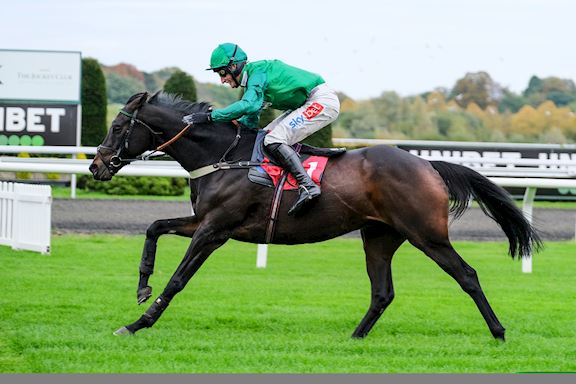 Jump Racing returned to Kempton Park on Sunday 17th October and trainer Alan King, who enjoyed Group One success on the Flat at Ascot on QIPCO British Champions Day with Trueshan, continued his outstanding weekend with a double.

Alan King hailed stable stalwart Sceau Royal a “legend” after making his return to action a triumphant one in the feature Unibet 3 Uniboosts A Day Hurdle today.

The popular nine year old secured his first success since landing last season’s Grade Two Betfair Game Spirit Chase at Newbury with victory in the Listed event to complete a near 5.2-1 double on the card for the triumphant trainer.

After racing alongside favourite, and winner of the race for the past two seasons, Silver Streak, in behind early leader Teqany, for much of the two mile prize the 7-4 second favourite loomed into contention at the top of the turn in.

As Silver Streak set sail to try and secure his third success in the race approaching two out his move was immediately covered by Daryl Jacob aboard Sceau Royal, who quickly asserted on the run down the last.

Quickly pressing on after jumping the final flight Sceau Royal, who finished third in last season’s bet365 Celebration Chase at Aintree and fifth in the Betway Queen Mother Champion Chase at the Cheltenham Festival, had too many gears for his chief market rival with three and a half lengths separating the pair at the line.

King said: “That was lovely. We had the option of going back for the Welsh Champion Hurdle at Ffos Las which he won last year or going for this.

“He was rated a lot higher over hurdles this than he was last year and I thought this was the right place to come and get him started rather than carrying top weight yesterday.

“I thought he would run very well but come on for it a bit. It was a good starting point. He has just been a superstar. He always travels well through his races.

“The Queen Mother last year was very hard to take. I don’t think I’ve ever left a racecourse I did that day and that might have been his big chance but we have regrouped and he has been fine.

“He has been an absolute legend year after year and hopefully there is a bit more in him yet.”

King confirmed that Sceau Royal will now step back up to Grade Two level on his next start and try and defend his Unibet Elite Hurdle on 6th November at Wincanton.

He added: “I’d imagine we would go back for the Elite now which he did last year and go from there.

“Over fences I would only go left-handed as he does go left. I know he won the Henry VIII a few years ago but he is better left-handed over fences.

“We will just duck and dive with him.”

An outing in the Grade One Betfair Fighting Fifth Hurdle at Newcastle next month remains on the agenda for Silver Streak according to his trainer Evan Williams, who was full of admiration for the winner.

He said: “He was beaten by a very good horse and we have so much respect to the winner and Alan’s horses are in very good form. There are no excuses.

“We will go to the Fighting Fifth now. Some days you are not disappointed about getting beaten as you get beaten by the right horse and he is not going to win them all. The winner is a very good horse.

“We will be alright. Good horses get beat. We didn’t jump well today. He didn’t jump the first or second. I thought we would pick up turning in and go and win the race but he didn’t.”

Chester Williams admitted he felt “absolutely great” after securing the first Listed victory of his career in the saddle aboard Balko Saint, who returned to winning ways in the Unibet Extra Place Offers Every Day Novices’ Hurdle at Kempton Park this afternoon.

Having been beaten on his chase debut at Clairefontaine in France last time out, the Jane Williams-trained four year old bounced back to form on his return to smaller obstacles to claim top honours in the two-mile prize.

Ranging up alongside Tulin down the home straight the 7-2 chance, who finished down the field in the Grade Three Boodles Juvenile Handicap Hurdle at the Cheltenham Festival in March, hit the front jumping the last.

Kept up to his work by Williams on the run in, Balko Saint responded well before drawing clear to score by three and a quarter lengths from Tulin.

The winning rider said: “We had a look at the race at 11am on Monday and we thought we had to have a go as he was the highest-rated horse in the race.

“He had a five pound penalty today in the race which wasn’t easy and I would normally claim on him so he had to take a step forward today.

“He has done it well as we were worried two miles around here would be sharp enough and it probably was but all he has done is stay.

“Turning in, it was between me and the Paul Nicholls horse and I knew if I could put it up to him he would stay well and that is what he has done.

“He has jumped brilliantly the whole way. He was very good at the last and all in all it was a good performance really.

“Last time in France was a mystery as we ran five horses there that week and they all ran badly.

“He travelled really through the race but he got to two out and stopped. He will probably go back to France over fences now.

“It is absolutely great to get a win like that on the board. They are the races you want to be riding in and I’m fortunate to be riding good horses like him.”

Amy Murphy and jockey Jack Quinlan were both as surprised as each other when Mercian Prince had his name called out as the winner the Unibet New Instant Roulette Handicap Chase, which the 13-8 favourite claimed by a nose.

Murphy said: “Jack and I thought we had been collared but I’m delighted to get it. He probably wasn’t quite as exuberant in his jumping today.

“Don’t get me wrong he was foot perfect but he is normally taking lengths out of them at fences.

“I’m absolutely delighted for him and he loves it around here as that is his fourth win at the track.

“He was so unlucky to get collared over hurdles at Worcester a couple of weeks ago so I’m delighted to see the old boy back.

“This season he has done nothing wrong and has been there bar every run. He is a huge yard favourite so we are delighted.”

Isolate continued trainer Alan King’s fine weekend after opening his account over fences at the third time of asking in the Racing Welfare For The Racing Community Novices’ Handicap Chase.

Having saddled Trueshan to glory in the Group Two Qipco British Champions Long Distance Cup at Ascot on Saturday the Barbury Castle Stables handler was back among the winners following the five year-old’s eight length success.

King said of the successful 5-4 favourite: “He has had a proper little break since Newton Abbot. He usually needs his first run back but I’m delighted with that.

“He is not bred to be a chaser but he is very good at it. For a small horse he has got quite a lot of scope.

“It is a pity there are not more but two miles two is probably his ideal trip. He is a fun horse for the syndicate.”

Looking ahead to next season with Trueshan the Grade One-winning trainer hopes the ground conditions are right to allow him the opportunity to have a tilt at the Gold Cup at Royal Ascot.

He said: “It was relief more than delight for me. I was nervous beforehand as it was only two weeks since France. It was a tough performance as he had to battle.

“He looked lovely and bright this morning and he has got all winter to get over it. It would be lovely to get to the Gold Cup next year as that is the race we would love to run in as it is the main staying race.”

Knight Salute (9-2) kept up the impressive run of form of trainer Milton Harris when maintaining his unbeaten record over jumps with a tenacious two-length success under Mitchell Bastyan in the opening Jockey Club Supporting Racing Staff Week Juvenile Hurdle.

Bastyan said: “He was impressive there and settled much better than the last time I rode him.

“He was a bit keen at Sedgefield and cumbersome with his jumping but he impressed me with how he jumped today.

“We knew he had a turn off foot and he was impressive at Sedgefield but he didn’t beat much but it is nice to see him do that in that sort of company today.”