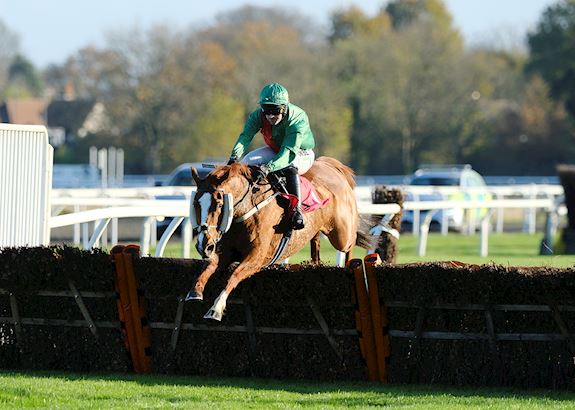 While it was his name on the race card, Willie Mullins was quick to hand all the credit to the former Grade One-winning jockey David Casey, after My Sister Sarah (10-11 Favourite) made the most of a good bit of placing to seal a facile success in the Listed Racing TV Mares' Hurdle at Kempton Park this afternoon.

This was the seven year old’s first visit to these shores outside of the Cheltenham Festival and she travelled powerfully into proceedings under Nico de Boinville, taking up the lead at two out before rolling away to a seven-length success in the extended three-mile contest.

And speaking away from the course, Mullins was thrilled to see everything go to plan for the daughter of Martaline, who looks likely to have the Grade One Close Brothers Mares' Hurdle on her radar in the spring.

He said: “I’m delighted. It was a nice opportunity that was spotted by my team at home here – I’ll give the credit to David Casey – and I’m very happy that Nico de Boinville got on with her as well, so I’m very pleased with how everything went.

“We’ll try and keep her to mares’ races over that kind of trip and perhaps we’ll look to Leopardstown at Christmas next while keeping an eye on the English programme as well. I’d imagine the Mares’ Hurdle will be her main target in the spring at this stage.”

Winning jockey Nico de Boinville added: “She’s jumped and travelled really nicely, the ground was probably slightly on the dead side but she’s done it well in the end.

“She just gained her confidence throughout the race, I spoke to Willie and Ruby (Walsh) this morning and they said to ride her to find her. It’s a nice prize, so it was well worth coming over here for and it’s a bit of black type for her too.”

It proved to be an interesting six race offering and other notable winners included the Dan Skelton-trained Rockstar Ronnie (13-8 Joint Favourite), who took his tally over fences to two wins from three outings when winning the Racing TV Novices' Chase (2m 2f) in fortuitous circumstances.

With four fences omitted in the back straight due to the sun, Sebastopol looked to have the race at his mercy when falling at the final fence, allowing Rockstar Ronnie to pick up the pieces. Thankfully both the seven year old and jockey Aidan Coleman were unscathed and winning jockey Bridget Andrews admitted that it was a welcome piece of luck for the son of Stowaway.

She said: “It’s not ideal circumstances to win in and nobody likes to see that, but we’ve come out of the other side of it today and got lucky. It was a shame that some fences were omitted, we looked at the shadow and it was too far out really, especially down to a ditch.

“Once one person mentions it it’s hard to say let’s jump them. He jumped fantastically though and he probably hasn’t had enough rest in-between his runs so fair play to him. We know we need to give him a bit more time in-between his runs, but he’s a brilliant jumper and he should be proud. He might have a little break now when the rain comes and he’ll be back in the spring.”

The opening race on the card was the EBF Stallions "National Hunt" Novices' Hurdle over two miles, which saw Call Of The Wild (1-3 Favourite) get off the mark over hurdles at the second attempt for the Alan King team.

The four year old was made to work hard by the runner-up Petrossian, who held a narrow lead at the final flight, but he rallied gamely under Tom Cannon to seal a two and a quarter length success.

And Cannon was pleased with the performance. He said: “Before the race I was hoping that Petrossian would go on but I spoke to Harry (Cobden) and that wasn’t the case and neither was Scu on Hartnoll Hero.

“We had a bit of experience though and he was actually fine making the running in front, so he got the job done at the end of the day which is the main thing and hopefully he can go on for that. He did well to get back up and I was surprised with how well he responded – and he did it nicely in the end.

“He jumped the last two as well as any other on the track and I think that really helped him, he likes to get on with things and he’s an obviously a nice horse. He’s a bit babyish, but he’s coming along nicely.”

Elsewhere on the card, Ben Pauling was delighted with what he saw from the improving Not At Present (9-2), who took the Wise Betting @racingtv.com Handicap Hurdle over an extended three miles.

The six year old has now won three of his last four outings and Pauling feels there ought to be more to come when he goes chasing. He said: “He’s an extraordinary horse. He was so backward and gawky as a youngster, but he’s really starting to click into place now and is improving all the time.

“He’s not a fussy horse and he’s pleased me there because he’s gone through the race without a moment of worry which for him is extraordinary – normally he makes you think he’s going to get beat at least five times!

“I keep threatening to go chasing with him as he’s a big raw chaser and he doesn’t really respect the hurdles, he’s getting better at getting from A to B, but he’ll definitely improve for a fence. He’s been busy enough now though so at some point he’ll have to have a break and come back in the spring.”

Speaking after his success in the last, Harrison said: “Fergal has a four-timer today (he also saddled two winners at Ludlow, giving a 37.8-1 across the card four-timer) and that tells you all you need to know – he’s a fantastic trainer and I’m lucky to be riding for him.”