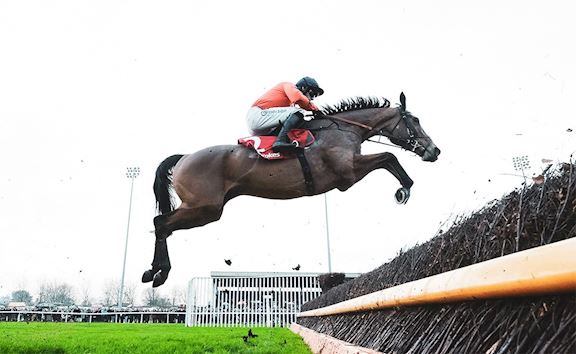 The 11-10 favourite Ahoy Senor made the running but entering the straight for the final time it was clear that Bravemansgame was travelling the best and the six year old pulled clear for a seven and a half-length victory under Harry Cobden. Nicholls is now equal with Nicky Henderson in having saddled five winners of the Grade One contest. The 12-times champion trainer was previously triumphant in the three-mile contest with See More Indians (1993), Strong Flow (1993), Breedsbreeze (2008) and Black Corton (2017).

Paul Nicholls said: “He was good. He travels, he jumps but he has got it all. He stayed on strongly.

“It is the first time he has won over three miles. I was thinking a little bit that the ground might be on the slow side but those good horses keep galloping. He is just improving all the time physically.

“We’ve not been too hard on him. I learnt a few lessons on how to train him from last season. Last season he was half the horse he is now. I’d like to think he will improve as he physically gets better. It was a mighty performance and he put up what we thought he might do. If you are going to make him win the King George when he is nine and 10 you don’t want to over-do him now. He is a very special horse to do that like that.

“He is three from three over fences. I know the guys would like to go to Cheltenham but my aim is going to be next year’s King George as everything would suit him. He just been a special horse right from day one.

“When he was hurdling he won a Challow Hurdle but he was always going to be way better this season as he has just physically improved. If you want to get them horses at their best like Clan and Frodon at their best when they are nine you have to give them time to mature and not leave races at home.

“When I compared him to Denman I got misquoted as I said he followed the same route as Denman winning Challow. To be honest did Denman achieve more over fences at this stage of his career I’d say no but Denman was a real Gold Cup horse, however this is a special horse to. If he is half as good as him it would be great but we are on the way to getting there.”

Harry Cobden added: “Derek (Fox, rider of Ahoy Senor) went a good gallop down to the first and stole 10 lengths on us at the start. I just thought we went a nice even gallop. He travelled and jumped really well and he did everything right. I’m very happy.

“The one thing I would say is maybe Derek’s horse might have underperformed as the third horse was quite close to him. Our horse gave me an unbelievable feel and for one to pick up like from the back of two out doesn’t happen very often and he is obviously very special.

“I’d rate it (jumping) 10 out 10. It is unbelievable to ride these sort of animals. To be honest I let this race get away a few years ago when La Bague Au Roi beat me on Topofthegame so it is nice to get it back. He is a funny horse our lad as when he is in front he is so alert he takes you down to every fence. He is almost daring you to go on long strides. Today in behind he barely picked the bridle up and he popped away at every fence. He was economical, quick and he lost no energy whatsoever on the whole way round. He is so responsive to have a horse with that sort of mentality you can ride him anywhere. He is the ideal very straightforward horse that everybody wants to ride.

“He had plenty of runs last season and he was probably weaker last season. Not only that I know I’m getting better at riding him and Paul is getting better at training him. He is the sort of horse you can’t gallop hard. We have all learnt a lot about the horse and, fingers crossed, he keeps improving. These horses are really hard to come by and there are only one or two a season. We are just fortunate he is on our yard and I’m riding him.”

Lucinda Russell, trainer of runner-up Bravemansgame, said: “I’m delighted with him and he’s still a star - he just needs to tighten his jumping up a bit. For a novice he is doing extremely well and I’m very proud of him. That mistake at the fourth last probably did take a bit of momentum away, but I still think he’s an awesome horse and we are delighted to be here.”

A further 10 lengths back in third was Kiltealy Briggs and his trainer Jamie Snowden said: “There’s lots of positives to take from that and we kind of had nothing to lose coming here. We were entered at Newbury in a novice handicap on Wednesday and the winner picks up seven grand. He’s picked up 10 grand here for finishing third there today. We had nothing to lose, he’s run a belter and the handicapper has probably got to leave him alone. We know he stays three miles now and we’ll probably work back from the Ultima (Handicap Chase at the Cheltenham Festival) I would have thought.”