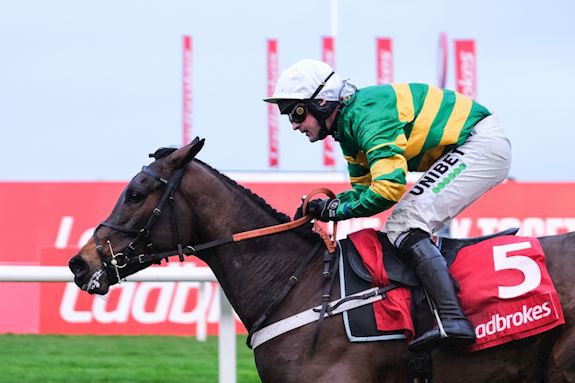 Epatante became the eighth horse to win the Ladbrokes Christmas Hurdle for a second time when she repeated her success of 2019 in the Grade One race at Kempton Park today. Trainer Nicky Henderson was winning the two-mile contest for a record-extending 10th time.

A year ago Epatante, who also won the Unibet Champion Hurdle at Cheltenham in 2020, was beaten at 1-5 in the same race but there was no mistake today as she came home the two and a quarter length winner under Nico de Boinville from 28-1 chance Glory And Fortune. It was the eight time owner J P McManus has seen his colours carried to Christmas Hurdle success.

Nicky Henderson said: “She’s got herself back. We were just jumping so slick and well and I’d imagine it was difficult for Nico to say no and he let her stride on. She galloped away well in testing ground and what you can see there is how her jumping is back together again, she’s so slick through the air and that’s where she was at the back end of last season – her jumping had gone.

“That’s changed the game quite considerably, she jumped very well at Newcastle and probably came on for the run. I thought she looked fat all week! We’ll see and at the beginning of the season JP said that the Fighting Fifth and the Christmas Hurdle are our goals, the next half we’ll just have to take as it comes.

“She might be as good as she was when she won the Champion Hurdle, but the others might be better this year too. We’ve achieved our two goals and we’ll see what happens next.

“She’s quick and is all about speed, but I think Nico’s right in that we expected to get a lead for a lot longer than we did, but when she’s on her A game like that and she’s jumping like that, why stop her. It’s the first time he’s ridden her and he did the right thing, her jumping took her to the front so why give it all back. Let her stride on, she’s as genuine as the day is long and she’s quick so you might as well use it.

“These two races were what we wanted to win and we’ve got difficult days ahead and we’ve got difficult decisions to make. We’ve got one and a half out of two and she’s still a very good mare, but so is Honeysuckle. That was a Champion Hurdle performance but it’s another bridge when we get there – though I suspect that is where we will end up. We’ve achieved what we set out to do at the start of the season and Rachael who rides her every day has done a super job with her. She’s back to herself.”

Nico de Boinville added: “I was happy enough for all it didn’t go to plan tactically and it was quite a messy race, but she was quite happy bowling along there and she seemed to jump for fun. If she had a lead I could perhaps have bided my time a bit more but I thought she was very good and she’s done it cosily enough in the end.”

Tom Lacey, trainer of runner-up Glory And Fortune, said: “There were no entries and we knew it was going to be a small field. It’s Christmas time and the boys put a lot into it. They wanted to come and have a nice day and they have the horses that are entitled to be entered.

“He has run a cracker with the hood off. It probably did make the difference and made him see it out a bit better. It is great. If he had winged the second last he probably would have been closer. I’d imagine Jerry (Hinds) owner will want to have a go at the Champion Hurdle. His handicap mark will go through the roof now so why not put a Champion Hurdle entry in. One thing for sure is that Jerry isn’t afraid of being bold. What a day.”

Jonjo O’Neill, who saddled third home Soaring Glory (17-2), said: “I’m delighted with him and I’m thrilled to bits. The mare is very good and you have to remember she is a Champion Hurdle winner.

“He wasn’t great when he came home from Newbury. He had a few issues like me and you! I’m very happy with him though. He jumped better today and did everything right. He had no excuses and he ran a cracker. He will probably have a Champion Hurdle entry but it is a bit early to say. The reason to come here today was to see where we are going. He is a nice horse. We will maybe go back to the Betfair Hurdle again we will see. As long as he comes back fine I’d say that will be the plan.”