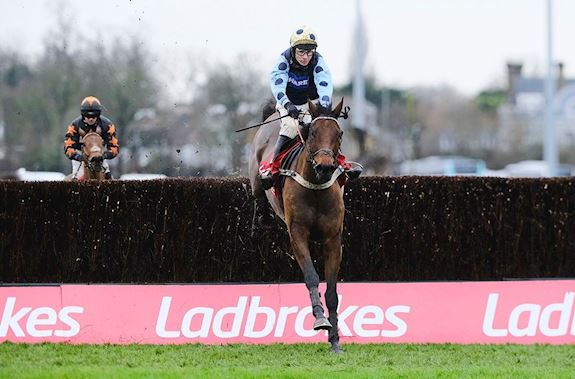 By Nick Seddon and Graham Clark

Trainer Alan King hailed Edwardstone as “very professional” and even compared him to the great Voy Por Ustedes after he produced a near-perfect performance to win the Ladbrokes Wayward Lad Novices’ Chase by 10 lengths.

Victory in the two mile Grade Two contest prompted bookmakers to trim his odds in to as short as 4-1 for the Sporting Life Arkle Novices’ Chase at Cheltenham in March.

The seven year old built a reputation as a talented hurdler, having lined up in handicap company at both the Cheltenham and Randox Grand National festivals last season.

However, he has taken his form to new heights over fences this season and after being brought down on his first appearance of the new campaign in early November has now won three consecutive races over the larger obstacles.

Having been ridden patiently by jockey Tom Cannon, Edwardstone swept into the lead with two fences left to jump and accelerated away to comfortably defeat the Michael Scudamore-trained Do Your Job, who finished second.

Afterwards trainer Alan King admitted he had considered resting Edwardstone after his victory in the Close Brothers Henry VIII Novices’ Chase at Sandown Park in early December, but was impressed with his victory today.

He said: “He was very professional and I couldn’t be happier with him, to be honest.

“We had a little bit of a blip when he got brought down at Warwick on his return but that was not his fault at all and he has really warmed to it (jumping fences).

“After Sandown I was going to put him away for Warwick in February but I thought it was too long and he came out of it well. I’m glad we have come here as he can now have a little break and we will go for the Kingmaker, hopefully.”

And while his chasing career is only just beginning, King even compared Edwardstone to some of the best horses he has trained, including Arkle and Champion Chase winner Voy Por Ustedes.

He went on: “He is as good as we’ve had for a long time. He would certainly be up there with Voy Por Ustedes and My Way De Solzen, who was a very classy horse too. A little bit like My Way he is bred for a lot further but at the minute he is doing the job well at two (miles) so we will stick to that.

“I just suddenly thought that he came out of Sandown really well and I’m thinking it is two months to Warwick and if we have a setback or freeze up in February you are thinking, ‘My God we haven’t run since early December and that might be a mistake’.

“We came here and it was a bit more practice for him and now he can have his couple of weeks’ break and vaccination and hopefully be back for the Kingmaker. Bar the first (fence) I thought he was very good. He just ballooned it but that can happen on the back of running at Sandown as it takes an awful lot of jumping there. He was just a little deliberate.

“As the race progressed he got into a lovely rhythm. He gets the trip very well. You would have thought on his pedigree he should be running over two and a half or three as that is what he is bred to. It is exciting and it is going back to the old days when we had My Way and Voy Por. We’ve probably not had one as good as him for a bit.

“I’m so chuffed for Robert (Abrey) and Ian (Thurtle) as they are great owners to train for but they also bred him. His full sister has just arrived and there are some youngsters coming through so there is plenty to look forward to.

“We need the youngsters as the old guard doesn’t go on forever. We are probably a young yard at the moment on the jumping front. It (Arkle) will be his only target. It will be the Arkle or nowhere.”

Winning joint-owner Robert Abrey said: “The whole team have been very patient with him and they all thought this was going to be the long term job (chasing). It didn’t quite work out when he was going to go chasing last season so he finished the season back over hurdles, but it has worked out great for us.

“The horse has strengthened up and everything is working away nicely. He has gone from strength to strength. It was just one of those racing incidents that happened at Warwick first thing this season and we just had to crack on after it.

“Sandown last time was beyond belief getting that Grade One. We were probably more nervous than at Sandown as we were here to be beaten. I’m chuffed how it went. It was a big call from Alan as he was going to leave him until February but he said, ‘I think he needs to run’, so we said, ‘crack on’. It makes it all the more special that we bred her as well.”

Meanwhile trainer Michael Scudamore said of his runner-up, the 9-2 chance, Do Your Job: “There’s plenty of positives to take from that, especially after last time when he didn’t get round and to see what he can do is something.

“He jumped great, he’s travelled great and we got very excited turning in but we were just beaten by the better horse on the day and there’s no excuses. Richard (Patrick, jockey) has given him a lovely ride and we’ll have a think now, Richard said he thought he wants two and a half (miles) off the back of that so we could look at that going forward.”

Bryony Frost, who rode third placed Solo, another 9-2 chance, added: “I was riding him for the first time and I think maybe better ground and upping him to two and a half (miles) may suit.

“He’s run right up to his mark there and all credit to him. He’s a very clever jumper and he wants to be more exuberant but with the soft ground out there it was seeing him getting in a bit tight. So better ground over two and a half miles could well see the best of him.”

Day two of the Ladbrokes Christmas Festival had begun with an impressive UK debut by Iceo, who won the Ladbrokes We Play Together Introductory Juvenile Hurdle in such emphatic style that jockey Bryony Frost described it as “the easiest I’ve ever gone around Kempton”.

The three year old gelding had only run once before, when winning in Dieppe in August. Now trained by Paul Nicholls, the 9-4 favourite followed that up with a 17 length victory over the Dr Richard Newland-trained Rewired, with Restitution a further 12 lengths back in third.

Jockey Frost, in the same silks of owner Chris Giles she will wear when riding Greaneteen in the Ladbrokes Desert Orchid Chase later this afternoon, had sent Iceo on from the very start, setting the pace with Illico Des Places for most of the first circuit.

The latter faded as the 10-strong field turned for home but, with a lead of eight lengths at the time, Frost and Iceo kicked on to demolish the rest of the field in the two mile contest.

Frost said afterwards: “I think that is probably the easiest I’ve ever gone around Kempton. It was smashing for his first run in Britain.

“He was a little keen early doors but once he found the cover of the lead horse he dropped it beautifully. If anything I went too far to sleep. He jumped amazingly and I can’t wait to see him in the future over a fence when he is ready.

“As starting points go I loved him out there on the testing ground as he made no problem of it. We are going into the winter months now and you would say with it being so dry until this point we are probably in for quite a wet spring, but we know he handles that ground.

“He can be on it a little bit at home and he can be a complicated character. They take time to settle into routines but he is going the right way. He is lovely and hopefully we can have a nice campaign for his first season.”

Trainer Paul Nicholls added: “I was taken by the way he won last time and he was very keen at home so it was just a case of getting him to relax and getting him fit and jumping well and what he did there was going to show us how good he was really – and he did that nicely.

“The other horse coming by set him alight a little and we didn’t expect that, we thought we’d get a lead in front and switch off, but once he went by he dropped the bridle and went to sleep and if he can do that it’s ideal.”

Referring to a potential run at the Cheltenham Festival in March, Nicholls went on: “The Triumph Hurdle is not necessarily the be all and end all for a horse like that. He’s a National Hunt horse and a future chaser, he’s not a Flat horse. If it’s held in testing ground like today we might have a look at it but there will be other nice races for him.

“Ultimately he’s a chaser in the future, he’s got the pedigree and the size and scope to be a chaser so we’re not worrying too much about the Triumph – unless he proves different.

“We popped the hood on in the last couple of weeks just because he’d been so keen, but he sort of switches on and off a bit and since we’ve had the hood on he’s sort of relaxed a lot more. As he does more he’ll get better and he’s a nice horse.”