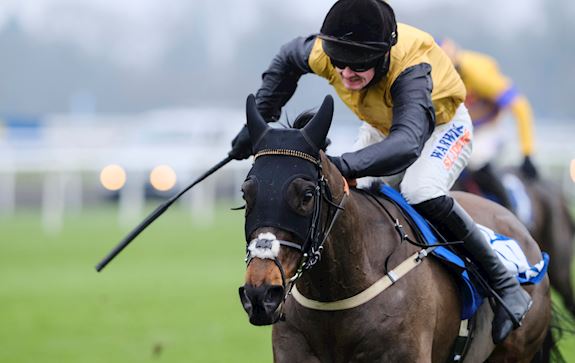 Cobblers Dream (10-1) provided enthusiastic owner Lady Jane Grosvenor with another high profile success after continuing his progression by taking both a step up in trip and class in his stride to run out a decisive winner of the Coral Lanzarote Handicap Hurdle at Kempton Park this afternoon.

After admitting to having “appalling butterflies” in the lead up to the Listed contest, which had its total prize fund boosted to £100,000 thanks to a new partnership between The Jockey Club and Coral, the Norfolk-based owner barely had a moments worry before seeing her colours carried to glory.

Taking up a prominent pitch early on in the 2m 5f contest provided to be a decisive move by jockey Jack Quinlan, who delivered the Ben Case-trained six year old full of running on the outside of long-time leader Highway One O Two turning for home.

Hitting the front on the approach to the second last the Yeats gelding continued to find plenty out in front under Quinlan before scoring by five and a half lengths from Highway One O Two.

Lady Grosvenor said: “It was a very exciting day the first time he won for us at Warwick. We are learning all the time and he is telling us all the time what he can do. We learn from the horse.

“I was apprehensive as ever as I get the most appalling butterflies as I’m so involved with the horses.

“I said half way round to George Case (the trainer’s son) this is meant to be fun but all you are doing is asking if he got over that okay.

“It is a really thrill for me as I’m involved from the moment we get them until they retire as I keep them.”

Success for Cobblers Dream was the latest chapter to be written between Lady Grosvenor and Case, who have celebrated previous big race glory with Croco Bay in the Johnny Henderson Grand Annual Challenge Cup Handicap Chase at the 2019 Cheltenham Festival.

She added: “We’ve had some wonderful racing with Ben. I’ve been extremely lucky and Ben is a fantastic trainer. He is a real horseman. He never over does them. I’m incredibly happy, I really am. We must have been going for 10 years together as we pinhook horses as well.

“We got Cobblers Dream to replace Kings Temptation who sadly died at Cheltenham. We wanted to replace him and what a lovely replacement he is.

“The attitude and the way he stood really impressed me at the sales. When we got him he was lean and he needed a good holiday so we turned him out for two months. He had a proper break then we gave him back to Ben and I think he has really benefitted from it.”

As for winning trainer Case he believes there is still further improvement left in Cobblers Dream.

Case said: “He has just improved all the way along. To be fair he has been very straightforward since we have had him. He travels nicely through his races and the step up in trip has helped him. He seems to be getting better all the time which is great.

“We thought we were in off a nice weight today. After his last run and when they announced the prize money was going up we thought it was the right place to come.

“I was a bit concerned about the ground as my other horse ran up at Wetherby and I thought he would win and it was really tacky up there.

“It wasn’t too bad here. They went off quite quickly then they slowed it down and the first two were the first two all the way round. He is a nice horse.

“The last time he came here it was a three runner race and it was only his second run for me and we were still learning about him. There is still a bit more to come from him.

Although Case sympathised with Jack Andrews, who was originally down to ride Cobblers Dream before deciding to take a book of rides at Wetherby, he was equalled delighted to provide Grade One-winning jockey Quinlan with another notable success.

He said: “It was a hard decision for Jack Andrews not ride him. We discussed it long and hard but he had a full book of rides at Wetherby. He is going to regret but Jack (Quinlan) has ridden him as well so he knew the horse as well.

“It is tough for Jack Andrews but I’m pleased for Jack Quinlan. He was first in line to get the ride afterwards and I’m delighted for everyone.

“It is nice to have a big Saturday winner and Lady Jane has been a big supporter of ours. She has had some really nice horses with us and this looks like another one too.”

Assessing future a plans Case hopes that Cobblers Dream may have done enough to warrant creeping into the foot of the weights for either the Coral Cup or Martin Pipe Conditional Jockeys Handicap Hurdle at the Cheltenham Festival in March.

He added: “He looks to be a proper horse but where he goes from here we will see what the handicapper does. Whether we creep into something at Cheltenham I don’t know.

“There is the Coral Cup and Martin Pipe as well. I would have thought those sort of races are the ones we look at. We have got time to go straight there now.

“Whatever way you look at it he has had a good season. He will jump fences and he will do that next season.”

Nicky Henderson admitted it had been a “great day” after First Street (11-2) formed the fourth leg of an across the card five-timer for the Seven Barrows handler when defeating stablemate Mengli Khan by seven and a half lengths in the concluding Coral Proud To Support British Racing Handicap Hurdle (2m).

Henderson said: “It’s been a great day and I can’t complain. I will settle for what we have had.

“Christmas time here was fantastic and we have been a bit dull since Christmas apart from Constitution Hill. But we have come back here and everything seems to have gone back where we were going.

“I love Kempton even in this ground it suited our horses well as they all stayed wide.”

On the 11-2 winner he added: “He never ran on the Flat. He was meant to but he never quite got there. He is the most extraordinary horse as he has got the worst clubbed foot you will ever see.

“He has been nothing but an absolute delight since joining us. I was certain he would win his first bumper but he was a bit too buzzy.

“He won his first two novice hurdles then I probably done the wrong thing stepping him up to two and a half last time. Nico said he was making a bit of a noise so we gave him a wind op and came back to two miles and here we are.”

Henderson said: “He deserves it but we are actually probably just finding out that he is a stayer. If you go back to the beginning of last season he put up an awesome performance at Newbury when he broke the clock but he never followed on.

“We tried him over three miles at Ascot the other day but he fell at the first but he jumped beautifully today and okay the small field helped us.

“There is every possibility now he will come back for the Coral Handicap Chase here next month.

“On the day we won the French Champion Hurdle with L’Ami Serge at Auteuil, David Powell, who brought the horse with Anthony Bromley, said you have got to buy this horse.

“David is very poorly at the moment and today this is for David.”

Henderson was also on the mark with Mister Fisher (15-8) in the Coral Silviniaco Conti Chase and Falco Blitz (7-1) who claimed the Coral “Fail-To-Finish” Free Bets Handicap Chase by a length, while Luccia (7-2) completed the haul when landing the Racing TV Free For A Month “Newcomers” National Hunt Flat Race at Warwick. 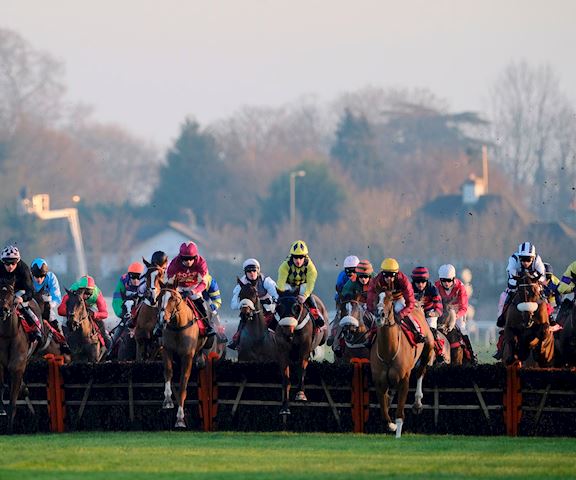 SNOWDEN HOPING FINE SEASON CONTINUES WITH PROGRESSIVE UP FOR PAROL SET TO CHALLENGE FOR £100,000 COR