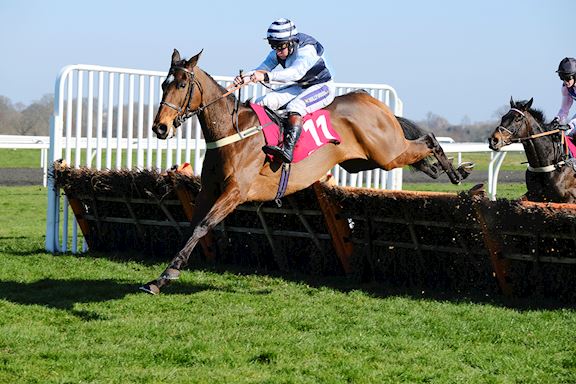 Chris Gordon continued what has been a fine season at Kempton Park after Press Your Luck transformed what he has been showing on the gallops onto the track with a clear-cut success in today’s Virgin Bet Handicap Hurdle (2m 5f).

After celebrating a double at the track last month highlighted by the Grade Two victory of Aucunrisque in the Sky Bet Dovecote Novices’ Hurdle the Winchester handler struck gold again at the Sunbury course courtesy of the progressive seven year old.

Leaving a disappointing run behind in the Coral Lanzarote Handicap Hurdle over course and distance in January with victory at Wincanton last time out, the 10-1 chance added to that success when claiming this afternoon’s event by three and a quarter lengths under Jamie Moore.

“One thing I wanted Jamie (Moore) to do was give him plenty of space on the outside and he has given him a lovely ride. That’s more the Press Your Luck you see at home.

“I put the cheekpieces on (in the Lanzarote) and he took exception to it. He cantered down to the start and he didn’t want to go at the start so I took them back off.

“He ran a lovely race at Wincanton and that got his confidence back up. This horse is a lovely horse at home we just don’t see it often on the track.”

While Gordon didn’t rule out sending Press Your Luck to the Randox Grand National Festival at Aintree next month, he hinted that a switch to fences could instead be on the agenda.

He added: “I suppose we could go to Aintree, but one thing I’m dying to do is get him over fences. He will probably have a run over them before he goes out in the field.

“He is a horse that is happy on good ground as he is a good moving horse.”

As for joint owner Paul Cox, he was quick to praise the triumphant trainer for his handling of Press Your Luck.

Cox said: “We brought him here last time and we had to pull him out of the race half an hour before as he had colic.

“He likes this track. Last year Tom Cannon rode him and was coming to win his race but he got knocked over by Ben Pauling’s horse which was not his fault.

“When he ran in the Lanzarote Chris put cheekpieces on but he sulked all the way round so Chris took them off. We went to Wincanton and he won by six lengths under Fergus Gregory.

“We came back here and got Jamie Moore and you’ve seen what he can do. He is a fabulous horse.

Marc Goldstein ended what has been a frustrating spell in the saddle after celebrating his first winner in 144 days aboard Certainly Red, who survived a final fence blunder before claiming the opening Virgin Bet Free Bets For Winners Handicap Chase (3m).

The 36 year old rider was forced to sit tight aboard the Lydia Richards-trained eight year old at the last, but despite the error the 2-1 favourite quickly recovered to defeat the running on Uallrightharry by five lengths.

Goldstein, celebrating his first winner since October, said: “My main trainer I ride for, Sheena West, got hit by a virus early in the winter and nothing has really recovered from it so it has been a bit of a write off of a season.

“I don’t get a lot anyway so I’m quite used to it. If I was out there every day it would get to you.

“I thought when he pecked at the last I thought this has summed me up (this season) but luckily he found a leg and we were fine.

“He started hanging from the left from the start, but he can jump better as he just concentrated on going left-handed. I’ll just be waiting for that next winner now.”

Trainer Tom Lacey admitted Sebastopol ensured he had his “heart in his mouth” at the last before clearing away smartly to secure a first victory over fences in the Virgin Bet Free Bets For Winners Novices’ Limited Handicap Chase (2m).

After falling at the final fence with the race at his mercy at the track in October, the eight year old Fame And Glory gelding then failed to complete when pulled up at the course on Boxing Day.

Returning from an 83 day break the 9-4 joint-favourite, despite making a mistake at the last, was not to be denied on this occasion after finding plenty up the run in to score by six and a half lengths.

Lacey said: “When I saw him hurtling down with his head towards the floor it certainly was a heart in the mouth moment.

“When he tipped up here it was no fault of his own with the race at his mercy. On his day he is a fine horse but he is incredibly ground dependant and we need to go where there is no juice in it.

“It is frustrating being second as he had a run of seven seconds and crept up the handicap every time.

“We will have a go at some nice targets in the spring. There might be something up at Ayr for this horse but we will take it day-by-day."