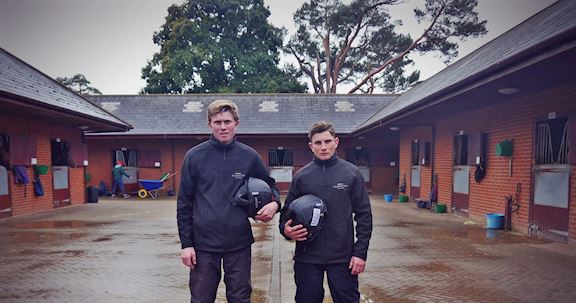 The London region of The Jockey Club has today announced Jamie and Josh Moore as the region’s Jockey ambassadors for the 2016/17 Jump season.

The brothers are local to both courses – they are based with their father, trainer Gary Moore, in Horsham, less than 30 miles from Kempton Park and Sandown Park.

The Moore family have had some impressive results across the London region of the Jockey Club over recent years. Over the last five seasons Jamie has been the most successful jockey at Sandown Park with 20 winners. More recently, through the 2015/16 season Jamie and Josh were the top two jockeys at Sandown Park, with Jamie enjoying a 41% success rate and Josh 35%. Similarly, their father, trainer Gary Moore saddled 10 winners from 25 runners at Sandown Park in 2015/16, making him the racecourse’s most successful trainer that season.

Jamie will forever be synonymous with Sire de Grugy, who made his first racecourse appearance at Sandown Park in November 2010 and has gone on to win the Tingle Creek Chase twice (2013 and 2015). The partnership were also successful in winning the bet365 Celebration Chase at Sandown Park (2013 and 2014) and the Queen Mother Champion Chase (Cheltenham) in 2014. They have also enjoyed success at Kempton Park, taking the spoils in the Desert Orchid Chase in 2013 and coming second behind Sprinter Sacre in a memorable running of the same race last year.

“Sandown Park has been a particularly happy hunting ground for me over the last season or so and I of course have some very happy memories on board Sire de Grugy at both Sandown Park and Kempton Park. I’m delighted to be an ambassador for The Jockey Club’s London region and can’t wait to kick the season off at Kempton Park on Sunday.”

“Sandown Park and Kempton Park are special racecourses for me and my family and I’m excited to be an ambassador for the courses. I look forward to having a go at knocking Jamie off the top jockey spot at Sandown Park this season!”

“As part of a local racing dynasty, Jamie and Josh Moore make the ideal jockey ambassadors for the region. We look forward to seeing the brothers competing at Kempton Park and Sandown Park this season – could there even be a head-to-head with Ar Mad (Josh) and Sire de Grugy (Jamie) in this year’s Tingle Creek? We look forward to working with both jockeys and wish them the best of luck for this jump season.”

Sandown Park and Kempton Park Racecourses are part of The Jockey Club, which has been at the heart of British racing for more than 260 years. Today the largest commercial group in the sport, The Jockey Club runs the leading racecourse group in the UK by turnover (2015: £174.2m), attendances (2015: 1.95m), total prize money (2015: £43.9m), contribution to prize money (2015: £19.9m) and quality racing (Group and Graded races); more than 3,000 acres of world-class training grounds in Newmarket, Lambourn and Epsom Downs; The National Stud breeding enterprise and education provider; and the charity for racing's people in need, Racing Welfare. Governed by Royal Charter, every penny The Jockey Club makes it puts back into British racing. More information is available at www.thejockeyclub.co.uk.