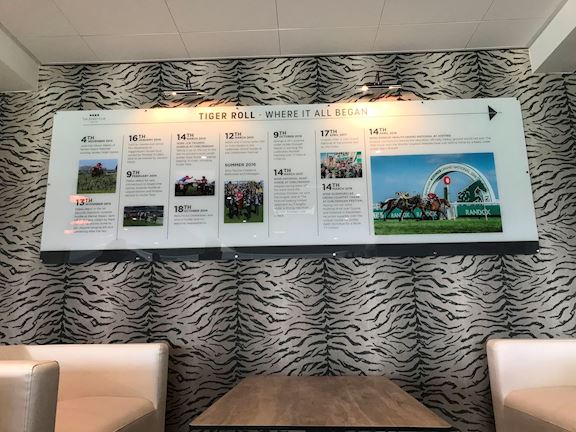 When Tiger Roll first appeared on the racecourse, here at Market Rasen, on 10 November 2013, little did anybody know what an amazing career lay before him. Sent off at 12/1 in a five-runner field of juvenile hurdlers, he won by three-and-three-quarter lengths for trainer Nigel Hawke, who rode Seagram to victory in the 1991 Grand National, and jockey Mark Quinlan.

Tiger Roll wasn’t bred to be a National Hunt horse. By 2007 Derby winner Authorized, whilst his dam Swiss Roll won twice on the Flat in Ireland, ironically trained by Tommy Stack, who famously rode Red Rum to his third Grand National win in 1977.

He was sold by his breeder, Gerry O’Brien, to the powerful Godolphin operation in 2010 as a foal for 70,000gns. He never made it to the track for the “Boys In Blue” and was sold again to Nigel Hawke for just £10,000 three years later.

After his debut win here, he was sold by his then trainer to his current owners, the Gigginstown Stud, for £80,000 in December 2013.

Having been defeated on his first run for new connections at Leopardstown, Tiger Roll lined-up at his first Cheltenham Festival on 14 March 2014 in the JCB Triumph Hurdle. Sent off at 10/1 and ridden by Davy Russell, he took the lead approaching the final flight and drew away to win by three-and-quarter lengths.

Although he won a four-runner race at Cheltenham and his first two chases, his form never really reached the heights of his early promise until two-and-half years later when, having his eighth run over fences, he won the Ladbrokes Munster National at Limerick over three miles at 20/1.

Two further defeats over fences that autumn were followed by a winter break before returning to the 2017 Cheltenham Festival and lining-up in the National Hunt Chase over four miles, a mile further than he’d ever raced previously, under amateur jockey Lisa O’Neill. Despite a moderate round of jumping, he led three fences from home, was not thereafter and stayed on strongly to win by three lengths.

With stamina now confirmed, his 2017/2018 season was geared around a tilt at the Grand National at Aintree. Three defeats as Wexford, Clonmel and Cheltenham were quickly forgotten as the now eight-year-old bounded up the hill at Prestbury Park to record his third Festival success, this time in the Glenfarclas Cross Country Chase under Keith Donoghue.

He lined-up at Aintree under Davy Russell, the pair reunited for only the second time since their Triumph Hurdle win four years earlier. Sent off the 10/1 joint-second favourite, he hit the front crossing the Melling Road for the final time and having led at the elbow by six lengths, he began to tire and clung on in a desperate finish by a head from Pleasant Company.

He remarkable attitude and versatility have continued to abound this year with victory in the Grade 2 Boyne Hurdle over 2m5f in February, his first run over hurdles for nearly three years, before recording a career-best and fourth Cheltenham Festival crown by winning his second Cross Country Chase by twenty-two lengths without coming off the bridle three weeks ago.

When lining-up on Saturday afternoon, Tiger Roll will bid the become the first horse since the legendary Red Rum to win back-to-back renewals in 1974. Many have tried in the 45 years that have elapsed but all have failed. However, none of them were like Tiger Roll. None of them had won at four Cheltenham Festival’s, none of them were returning following a career best and none of them were officially “well-handicapped". And most importantly, none of them started their careers with victory at Market Rasen!

To honour his already staggering achievements, we opened our new Tiger Roll Bar on Boxing Day in the County Enclosure. The views from the terrace outside are a great place to watch the action so please pay a visit during the afternoon.