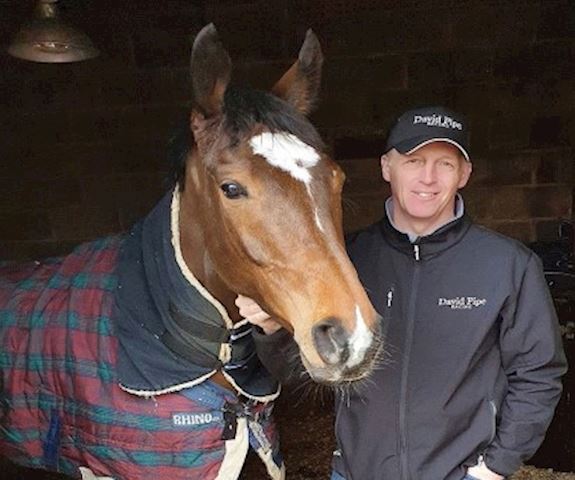 Trainer David Pipe believes Market Rasen winner Panic Attack has an excellent chance of delivering a Cheltenham Festival success for his Pond House team after the four-year-old joined his care having left the yard of Willie Mullins.

Panic Attack, a four-year-old daughter of Canford Cliffs, became a first runner at Market Rasen for master Irish trainer Mullins when lining up in January’s Listed Alan Swinbank Mares’ Standard Open National Hunt Flat Race and won impressively enough to see her rocket to the head of the betting for the Weatherbys Champion Bumper at Cheltenham.

Pipe was among those taken by what he saw that day and was subsequently delighted that the filly was purchased by owner Bryan Drew to join his yard in term for her date with Cheltenham Festival destiny.

Speaking on Wednesday, Pipe said: “I saw her when she won at Market Rasen, I was very impressed with her and thought she was a danger in the Bumper and that evening I got a phone call from RD saying that he was looking to buy her.

“She’s a lovely addition to the yard and a lovely horse for the future.”

Panic Attack’s visit to Cheltenham this month will be her first on what is only her second career start but things might have been different had plans originally set out by Mullins come to fruition.

“They were going to run her in the Cheltenham November Bumper but she got balloted out and went back to Ireland,” Pipe explained. “Then she came back over to Market Rasen. It looked a solid race for form and she won it without coming off the bridle.”

She has since been overtaken by Appreciate It and Ferny Hollow in ante-post markets for the Champion Bumper but she remains a 10-1 chance and Pipe believes the weight she will receive from the male horses in the race could have a big impact on the final outcome.

The trainer said: “It’s probably never ideal swapping yards mid-season but she seems to be fairly straightforward and has settled in well.

“She gets 15lbs weight allowance off the boys – that’s a lot of weight!”

Panic Attack would not be the first star to emerge from a winning debut at Market Rasen in recent years.

Tiger Roll, who could bid to win an unprecedented third Randox Health Grand National at Aintree next month, struck first at the Lincolnshire venue, as did Altior, himself chasing a third Betway Queen Mother Champion Chase at Cheltenham next week.

Nadia Powell, General Manager of Market Rasen Racecourse, said: “We are very proud at Market Rasen to be recognised by some of our sport’s most respected participants as the perfect springboard to long and successful careers.

“We are all excited to see whether Panic Attack can follow up her brilliant win here when she lines up at Cheltenham next week. We will all be watching and wish David Pipe and his team the very best of luck.”

The Weatherbys Champion Bumper is the final race of Wednesday’s second day of the Cheltenham Festival and will be run at 5.