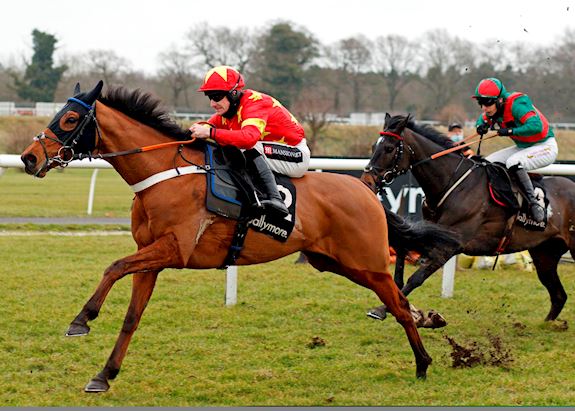 Minella Drama secured the most significant success of his career when proving a class above his rivals in the Ballymore Sidney Banks Novices’ Hurdle at Market Rasen on Sunday, 21st February.

After having to settle for second best in the Grade Two Rossington Main Novices’ Hurdle at Haydock Park last time out the Donald McCain-trained six year old returned to winning ways to lift the Listed prize, which was re-arranged from Huntingdon earlier this month.

The 13-8 favourite raced prominently throughout and despite not being foot perfect at the final flight, made his first start over an extended two and half miles a triumphant one in the feature contest after defeating the four-timer seeking Stoner’s Choice by three lengths.

McCain, speaking away from the track, said: “We wanted to step him up in trip as we didn’t see him as a true two miler.

“We put the hood on today as he can be a bit of a boy and it seemed to do him no harm. I’m really pleased and Brian didn’t have to work hard on him.

“He is a smashing horse and that win has helped us to know that he gets two and a half miles.”

With Minella Drama holding no entries at next month’s Cheltenham Festival a step up to Grade One company for the Betway Mersey Novices’ Hurdle at the Randox Grand National Festival at Aintree on April 10th is likely to be his next target.

He added: “I think two and half for the Mersey would be plenty at Aintree especially on a big day when they are going to go a better gallop and it could be a nice place to finish his season.”

A trip to Cheltenham may not be on the agenda for Minella Drama but Kim Bailey could give Ajero (7-2 Co Fav) an outing at the meeting after making it a hat-trick of wins for the season after claiming the MansionBet’s Faller Insurance Handicap Hurdle by two lengths.

Bailey, speaking away from the track, said: “He is an improving horse and he has had a wind op since his last run. He is much happier going right handed than left handed and we were slightly concerned that the ground might be a struggle but he has done that well.

“It doesn’t help with both Cheltenham and Aintree that he prefers to go right handed and we haven’t given him any Cheltenham entries but we might shove him in the County Hurdle.”

Blarney Bateleur (28-1) gave both trainer Andy Irvine and jockey Niall Houlihan a first course winner when prevailing by two and a half lengths in the MansionBet’s Watch And Bet Mares’ Handicap Hurdle.

Irvine, who is the former partner of trainer Zoe Davison who passed away last month, said: “I thought today the grade might be slightly too high but off 10st 1lbs it was worth having a go in a mares only and the ground would suit her.

“It’s tough and each day is different when I wake up and my wife is not there but we are keeping the show on the road as they keep saying.

“We left at 5.45am this morning (Irvine is based in West Sussex) and it took us nearly five hours to get up but just that is worth it.”

Peejaybee provided trainer Richard Spencer with a pleasant surprise when making his debut a winning one by three lengths in concluding the MansionBet Standard Open National Hunt Flat Race.

Newmarket-based Spencer said of the 6-1 winner: “I wasn’t expecting that. He is a horse we thought was going to be better seeing an obstacle as he has done plenty of schooling at home.

“We just wanted to give him a bumper run for experience. He went for a racecourse gallop the other day and that has obviously helped him.”

Oliver Greenall has not ruled out running Homme Public in the Grade One JCB Triumph Hurdle at the Festival™ after the four-year-old went one better than his three previous starts when taking the MansionBet At Market Rasen Juvenile Maiden Hurdle by six and a half lengths.

Greenall said of the successful 11-8 favourite: “I think he probably just needed it slightly and inexperience probably got him beat at Catterick. He is probably one of those horses that only just does enough.

“I think Cheltenham could suit him but he would need to travel better and I don’t know whether he is hardened enough for Cheltenham. We’ve got the option.”

There was a first victory away from Fakenham for the Lucy Wadham-trained Martello Sky (6-4 Fav), who got the better of Marada by a length and a quarter in the MansionBet’s Best Odds Guaranteed EBF Mares’ “National Hunt” Novices’ Hurdle.

Aidan Coleman, winning rider, said: “It did turn into a sprint and she has won well and we are 18 lengths clear of the third. She is a nice filly so I’m happy with her, 100 per cent she could get a bit of black type.”