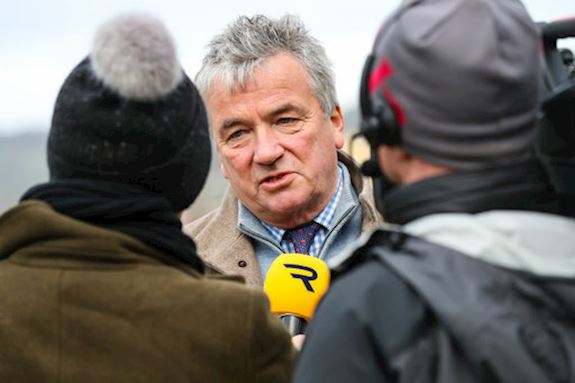 Nigel Twiston-Davies is confident Fantastikas can continue his progression when stepping back up in trip in the Racing TV Handicap Hurdle at Market Rasen on Wednesday.

Having filled the runner-up spot on five of his first six starts, Fantastikas finally got his head in front for the first time dropped back down to 2m 3f on his most recent appearance at Fontwell on February 28th.

The 2m 7f trip at the Lincolnshire track is not expected to present a problem and the trainer expects to see another bold run from the progressive six year old.

“He may have finished second a few times but he is a very genuine horse and it was a case of the right opportunity for him last time at Fontwell. We know he stays well so this trip shouldn’t be a problem.

“He is a very nice young horse and I hope his last win will have given him some confidence.”

Linelee King is yet to add to his debut success over hurdles at Kelso in November, however his trainer Olly Murphy believes he will be much sharper on his second start in handicap company when he lines up in the same contest.

Murphy said: “Linelee King has probably been a shade disappointing this season but he is in good form. He started off over two miles and is ending up running over nearly three miles.

“We are looking forward to running him over this trip as he did everything right over three miles last time, bar win where he bumped into a massive improver.

“He showed that he stays very well last time and that was his first run in a handicap and he will have sharpened up for that as well.”

Chris Gordon hopes Highway One O One, who is seeking a first success since claiming a graduation chase at Carlisle in November 2018, can build on an encouraging fourth on his first run following a winter break at Newbury last time out.

Gordon said: “He had a lovely break as he was a little bit under the weather and he came back and ran a lovely race at Newbury. Fingers crossed he can build on it. If he can it will give him a bit of squeak as he had some good form in the past.

“My wife Jenny rides him every day and she tells me he wants this sort of trip so I’ve gone for the wife’s option.”

Dual Grand National-winning trainer Twiston-Davies is counting on the application of a visor to help revive the fortunes of Sir Valentine, who will race over an extended two and a half miles for the first time in the racingtv.com Handicap Hurdle.

He added: “Sir Valentine has been a little bit disappointing this season. We started off chasing with him but he lost his nerve a little bit over fences so we put him back over hurdles last time.

“He was a bit disappointing at Warwick last time over hurdles but he had a little bit of time off before. We’ve stepped him up in trip and put the visor on to help him concentrate so hopefully he responds to that.”

Grade One-winning handler Murphy feels Gunsight Ridge, who is yet to finish outside the frame this season, is capable of playing a major role with conditions set to be in his favour in the same race.

The Worcestershire-based hander added: “Gunsight Ridge is in great form and he will certainly improve for his first start in a handicap at Kempton last time as he was still very green and raw.

“The drying ground will help him and he is a horse that should be very competitive again.

“He jumped and travelled well at Kempton - he was just caught a bit flat-footed when they quickened but he stayed on. He will make a lovely chaser next season but it would be nice if he can win over hurdles again before doing that.”