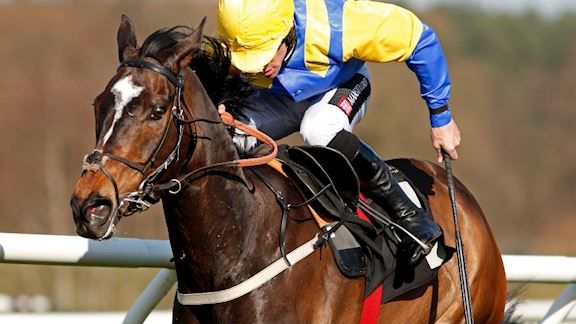 Racing returned to Market Rasen on Sunday 4th April and those tuning in on Racing TV were treated to a seven-race card of highly competitive action which could impact on who is crowned Champion Jump Jockey for the 2020/21 season.

Defending champion Brian Hughes extended his lead to three winners ahead of Harry Skelton following a double on the day. It was also a good day for James Bowen, who maintained his 100 per cent record aboard Equus Dancer, trained by his father Peter. With no crowd in attendance due to COVID-19 regulations, the screams of joy from amateur rider Amber Jackson-Fennell echoed around the racecourse as she enjoyed her first ever winner in the saddle.

Brian Hughes admits he will give it “good fight” to retain his Jump Jockeys’ Championship after extending his lead at the top of the table with a double at Market Rasen on Sunday.

With Harry Skelton not in action the reigning champion jockey took full advantage to move three winners clear of his nearest rival thanks to a brace secured by 6-5 chance Sauce Of Life in the concluding Racing TV Standard Open National Hunt Flat Race.

Although Hughes acknowledges the size of the team Skelton can call upon from his brother, and trainer Dan Skelton, the 35 year old is confident he has plenty to look forward to, which includes a strong book of rides at next week’s Randox Grand National Festival at Aintree.

“If I get beat, it won’t be for the lack of trying. Obviously Harry’s main yard, his brother’s yard, are flying but we will give it a good fight.

“We’ve kept a couple back for Aintree. There is Fiveandtwenty in the Grade One Juvenile Hurdle. She has won her three starts and we are stepping her up in grade but she has nowhere else to go. She has to dip her toe in the water.

“Gaelik Coast is a horse I like in the Red Rum (Handicap Chase) and I think two miles on nice ground around Aintree should suit him, and Waiting Patiently runs in the Betway Bowl. If we can nick a winner then great.

“We’ve got plenty of good horses to ride in the next few weeks and I’m lucky enough that a lot of people are giving me a lot of support so we will try our best and I expect it to go to the wire.”

Hughes predicts a bright future for the Nicky Richards-trained Sauce Of Life, who followed up his debut victory at Musselburgh, when denying Evens favourite Tigerbythetail by a short head.

He added: “I didn’t know if I had got it as you are never really sure when there is a closer. He is a lovely horse for next season. He was a bit green in front as he was having a look around but luckily for us his head was down on the line.”

Armattiekan got the ball rolling for Hughes when finishing with a flourish to run out a length and three quarter winner of the MansionBet Best Odds Guaranteed Handicap Chase.

Hughes said of the Donald McCain-trained 5-1 chance: “He has a little bit of a turn off foot but he loves that ground (Good). He jumps a little left which is tricky on a right-handed course.

“Donald freshened him up after the last day and hopefully he will now run on into the summer as he loves good ground.”

JAMES BOWEN MAKES IT THREE FROM THREE ABOARD EQUUS DANCER

James Bowen maintained his 100 per cent record aboard Equus Dancer, who is trained by his dad Peter, after the 3-1 chance claimed victory by two and three quarter lengths on his first visit to the Lincolnshire track in the feature MansionBet #morethanthenational Chase

Bowen said: “He missed one down the back but other than that his jumping was class. I think being on that better ground helped him. His jumping is just a bit sticky on soft ground.

“I thought the track would suit him. The right-handed track and the trip were perfect and it all fell into place for him. He doesn’t do a whole lot in front and I was there quite soon but in fairness when the other horse came to him he went again. That’s three from three on him now, I think we will have to get rid of that Sean Bowen!”

Screams of joy could be heard echoing around the near empty stands at the track from amateur rider Amber Jackson-Fennell who was left “speechless” after celebrating the first victory of her career aboard Eureu Du Borlay.

The 19 year old steered the Richard Hobson trained 11-2 chance to his first victory in more than six months when getting the better of Path To Freedom by a neck in the MansionBet Live Casino Cashback Amateur Jockeys’ Handicap Chase.

She said: “He is a very straightforward horse that has come off a short break but he just gets in that rhythm and he just wings the fences like this. He has won around Auteuil so this is easy too. It was a pleasure to ride him.

“They were my screams you could hear up the home straight. It has taken a while to get this winner so it means a lot. This is my first season as an amateur. Right now it does feel like winning the Gold Cup as it has not sunk in yet. I’m speechless.”

A late change of tactics proved decisive for Bryony Frost, who made her only ride at the track a winning one aboard the Lucy Wadham-trained Sorbet in the opening MansionBet Watch And Bet Mares’ Maiden Hurdle, which the 5-2 chance claimed by a length and a quarter.

Frost said: “We just wanted to sit in behind the leaders as that is what the team felt we needed to do today but when there was no pace and I called Justin (Wadham, husband) on the five minute call and said we have no pace, but he said we would a lead if we can.

“She has jumped upsides after winging the first and she was a little keen upsides so I thought I will go right to the front and control it. Better ground around here has helped her.”