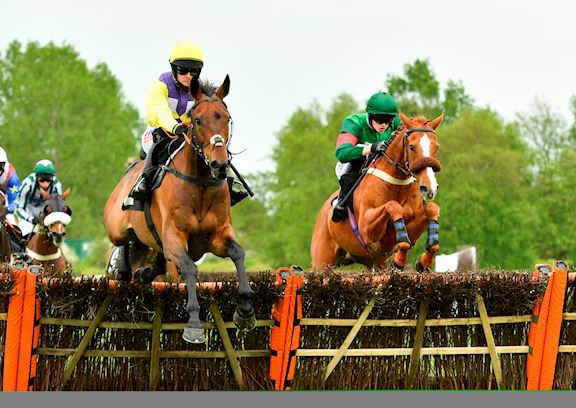 Amy Murphy admits there would not be a “dry eye in the house” if stable stalwart Mercian Prince continues his recent revival and secures the biggest victory of his career in the Betway Summer Plate Handicap Chase at Market Rasen on Saturday (July 17th).

Having saddled the recently-retired Really Super to a 25-1 success in the Grade Three prize 12 months ago, the Newmarket handler will bid to claim the valuable extended two miles and five furlongs contest for a second time with jockey Jack Quinlan again in the saddle on the evergreen 10 year old.

Mercian Prince was bred by the trainer’s father Paul Murphy and races in his colours and since undergoing a wind operation earlier this year has posted two solid efforts back over hurdles. After finishing second at Market Rasen on his first start of 2021 on June 4th, he went one better on his most recent outing with a battling front-running success at Worcester on June 20th.

A return to chasing is expected to benefit Mercian Prince, who has twice run over the Grand National fences at Aintree in the 2019 Topham Chase and 2017 Grand Sefton Chase.

And Murphy is confident of another big performance from her seasoned campaigner. She said: “He’s been with us from day one and we are really fortunate to have him.

“He’s just been unbelievable and to have him going into another Grade Three is very exciting. We’ve been trying to protect his mark over fences, hence why he hasn’t been seen over them of late.

“He is a home bred of dad’s and it is everything you want. He was my first winner for dad as an owner and he has been there for all the landmark events. As he is such a yard favourite if he did win I don’t think there would be a dry eye in the house.”

In previous campaigns Mercian Prince has struggled with his wind, however with conditions set to suit Murphy does not expect any old issues to flare up and hold him back.

She said: “His wind has always been his issue. That's why these days top of the ground is key to him because on soft ground he just gets found out like he did at Wetherby last season.

“From that day on he only runs if it is good or better and it certainly seems to be his way of going. He didn’t look like a horse that had a wind problem the last day at Worcester as he put his head down and wasn’t letting anyone by him.

“Ground really is key to him and any of his runs on top of the ground he is always there or thereabouts. Mentally for him he enjoys being in front but it is more important that he is in a rhythm rather than being in front when his wind might catch him out.”

If Murphy has one slight reservation then it might be the trip, given that Mercian Prince’s best form has been over slightly shorter distances.

She said: “That is the only query as he has to get home over that trip. If you look at his form, the best of it is over two three or two and a half.

“He has got to get that extra furlong and a half on Saturday, but hopefully with the ground being as quick as it is then we should be okay. That is also another reason why he doesn’t have to make the running as we have got to be mindful of the trip.

“If he jumps off and gets into an easy lead then fine, but if he is taken on he is better off sitting in behind the leaders. Jack will make that decision on the day and he knows him like the back of his hand. He rides him at home day in day out, so nobody knows him better.”

Although Murphy is disappointed that her talented mare Really Super, who was retired last week after meeting with a setback, has not had the chance to defend her Summer Plate crown she is confident she will prove equally successful in her new career at stud.

She said: “It was only a minor niggle but with a mare of her calibre it is too much of a risk. She will make a fantastic broodmare. She is probably the best looking horse we have got.

“She has got a lot of presence about her. She will go off to the paddocks and hopefully have a lovely career at stud. We look forward to following her babies in the future.”

The retirement of Really Super has ensured Grade One winning jockey Quinlan was not faced with a difficult decision as to who he would ride at the weekend. However, he is confident his trusty ally can continue his recent rejuvenation now switched back to fences.

Quinlan said: “If you go further back in his career some of his wins were very classy and he has mixed it with some high profile competition.

“Though that was a few years ago he seems to be on a bit of a comeback mission with a second and a win under his belt this year and if he continues that progression he should have a good chance.

“It has been a great bit of placing by Amy to use his hurdle mark, which is lower than his chase mark, to get those confidence-building runs under his belt before tackling the Summer Plate.

“The trip is a question mark but I’ve every confidence in him. If he gets into his jumping rhythm and is enjoying himself he should see it out.”

Quinlan, who is due to marry his partner Molly May next month, celebrated Grade One glory with Murphy when steering Kalashnikov to victory in the 2019 Manifesto Novices’ Chase at Aintree and believes victory for Mercian Prince at the weekend would be just as special.

He added: “If you asked everybody in the yard he would be nearly everyone's favourite. He has been here since day one and he was my first winner for Amy.

“He can be a frustrating horse to ride out as he likes to push the boundaries. It would mean absolutely everything to everyone in the yard if he could win as he has been a nearly horse but he has performed well just below the top level in big handicaps.

“When he has had his chance on big days it has never really come off and the ground has gone too soft or there has been too much pace in the race. For him to get a Grade Three by his name would be amazing.”

Mercian Prince is a 12-1 chance with sponsor Betway – a full list of odds can be found at here.