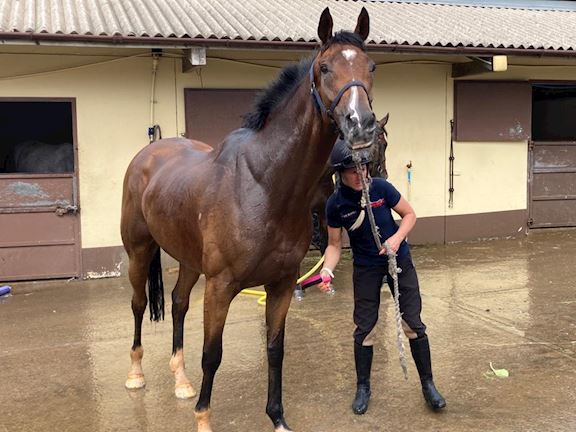 Peter Bowen believes Francky Du Berlais is the “ideal type” to follow in the hoof prints of some of the best horses he has ever trained by securing him a seventh victory in the Betway Summer Plate Handicap Chase at Market Rasen on Saturday (July 17th).

Having tasted defeat on his first eight chasing starts Francky Du Berlais has not looked back since registering a first success over fences at Exeter in January. Beaten at Perth in April, the eight year old bounced back with victories at Haydock Park and on his penultimate outing at Uttoxeter in May.

Although Francky Du Berlais was third on his most recent outing at Cartmel on June 27th, the Grade One winning trainer is confident a return to a more conventional circuit can help his rising star return to winning ways.

Bowen said: “We do target the race every year as lots of our horses run very well at that time of year. It is also a good race for novices coming through and that is basically what Francky Du Berlais is - a novice coming up.

“We sent him up to Cartmel the other day but that track didn’t suit him at all. He was always on the back burner and he couldn’t really get into the race, but he stayed on really well and he was only beaten by about five lengths.

“Since the start of January he has really turned it around. I think he has just matured. I think he was just mentally and physically backward but he has now got it all together. He just jumps so much better and quicker now.

“Health-wise, he has always been good. He ran over hurdles a lot but he wasn’t a true hurdler and he has improved for going over a fence. I think he would have a good chance in it. He strikes me as the ideal type for this race.

“He won over two mile four at Uttoxeter but he just got there at the end. I don’t think going a little further will do him any harm so I’m quite hopeful with him.”

Bowen will be keeping a close eye on the weights for his other potential runner, Lord Bryan, who defied a 170 day absence to make a winning return over course and distance in last month’s MansionBet #betstival “Summer Plate Trial” Handicap Chase.

Bowen said: “Lord Bryan goes well fresh. Normally after a race he would scope with a bit of mucus but we scoped him last Tuesday and it was 98 per cent right and by this Saturday he should be 100 per cent right.

“He did a nice piece of work on Tuesday morning and he would run well if he gets into the race, but it is a question if he gets in. He won the trial as he liked but that is him when he is right. When you go through his form you think he must be a non-trier but he does try hard when he is right.

“Since we have put the sand gallop in this year it has made a huge difference to him because he doesn’t have to do any quick work. He just gets fit lobbing around there.

“When he is right he is tough and a brilliant jumper which will stand him in good stead around there. He is a strong traveller which is what you want around there.”

Arguably Bowen’s greatest winner of the Plate was Snoopy Loopy, who in 2008 would go on to defeat the mighty Kauto Star in the Grade One Betfair Chase at Haydock Park.

However, Bowen admits it was far from plain sailing at the beginning for the Dai Walters-owned gelding. He added: “All the horses we have won the Summer Plate with have gone on to be good horses.

“Ballycassidy was a good horse who ran in two Gold Cups, Snoopy Loopy went on and won the Betfair Chase, and though Always Waining was only third in the Plate, he went on and won three Tophams at Aintree for us.

“When we got Snoopy Loopy he was the most expensive horse we had bought at 120,000 guineas. Karen (Bowen’s wife) said ‘who will buy him?’ and I said ‘Dai Walters can have him’ but she was panicking as he cost so much money.

“I remember we ran him at Worcester the first day and when we got him we also got one for 40,000 at a sale called It’s Definite. Tthere were no races for them anywhere and we had to run them both at Worcester in a novice chase.

“It’s Definite beat Snoopy Loopy, who was odds on, and you should have seen the look on Dai Walters' face!

“He had a touch of a leg and niggles all along but once he started winning he just kept going on and on and on. Every race he went in, he improved.

“I remember Dai saying ‘you are running him too often’ but I said ‘he is 10 years old and you have to take what you get now as it won’t last long’. What he ended up doing for everyone in winning the races he did was amazing.”