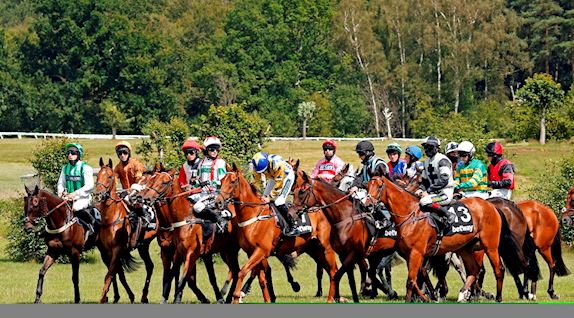 Dr Richard Newland is hopeful that Captain Tom Cat can continue a fine start to his chasing career with another strong performance in the Grade Three Betway Summer Plate at Market Rasen tomorrow (Saturday 17th July).

The six year old has won each of his three starts over fences since switching to chasing in May, but has been hit hard by the handicapper for those victories and will take his chance off a mark 22lbs higher than when making his chasing debut.

However, he is the current 9-2 favourite with sponsor Betway and Newland believes his gelding has all the tools necessary to run a big race.

He said: “He’s been a complete revelation since going chasing and is obviously unbeaten over fences. The handicapper has not made it easy for him and he’s very nearly top weight as the youngest horse in the race.

“All of his racing over fences has been done going left-handed so it’ll be a different challenge on Saturday, but we look forward to running him and he’s in good form.

“He’s taken all of his races in his stride and he loves his jumping. He’s pretty inexperiHenced in a race like this but if he did manage to win off this mark he must be a very good horse.”

The maximum 16-strong field for the feature race is a competitive one and also includes the Paul Nicholls-trained Darling Maltaix. Nicholls has won this race twice before, most recently with Alcala in 2017, and believes the son of Voix Du Nord is a good fit for the Summer Plate.

He said: “This has been the aim for Darling Maltaix for a little while since he’s come in from his holiday and won his prep race at Newton Abbot. This is a little more competitive than that was, but he seems fit and well and ready to go.

“He’s gained a lot of experience in smaller fields but he’s an experienced horse and he’s been a lot more relaxed since we’ve taken the hood off him and things like that he used to have on. He doesn’t have to make the running these days so he’ll be fine (in a big field). He’s got lots of experience and that’s what counts.”

Another trainer with previous form in this race is Dan Skelton, who won the Summer Plate with Long House Hall in 2016. Brother Harry Skelton was in the saddle that day and the siblings team up this time around with Solomon Grey, the 6-1 second favourite with the sponsor.

The nine year old was a fine third behind Really Super in last year’s renewal and Skelton believes he can improve on that performance 12 months on.

He said: “He made a bad mistake last time at Uttoxeter which gave Harry no chance, but I think 2m 6f here is grand for him. We’re going to put cheekpieces on just to help him and he’s off a mark which we feel he can be competitive off.

“It’s hard to win these top end summer races, we did it a few years ago with Long House Hall but this year’s line-up looks very competitive. He was an excellent third last year so he’s got to be better this time around if he’s going to win.”

Skelton also sends out the mare Danse Idol and added: “She arrives here in good form and has a low weight. With these mares we’re always looking for more black type and the track shouldn’t be an issue for her. Tristan Durrell is a good rider and takes a useful 7lbs off, so we’re giving it a shot.

“Tristan works very hard and is very capable, so it’s good to give him a chance. He’s old enough and strong enough now to get his chances and hopefully he’s got a chance of progressing and having a career. It’s so hard for these young kids to break through. They have to get opportunities, which is the hardest bit to come by.”

It is a notable day for Market Rasen, with three races televised on ITV Racing, including the Betway Summer Handicap Hurdle at 2.05pm. Dr Richard Newland is represented in the race by Wicked West, who has won both his starts since joining the yard.

His trainer feels he has more than deserved his opportunity in this race and said: “He’s done really well since joining us and is a nice addition to the team. This is obviously a big step up, but it seems the logical thing to try him in it. The handicapper has put him up plenty, but hopefully we’re in with a good shout.

“I don’t think he has to make all, but I’m sure Sam (Twiston-Davies, jockey) will want to ride him handy and in my experience of that race it’s not necessarily a bad thing.”

Meanwhile, Dan Skelton sends out Ambassador, a horse he feels will be suited by the fast-paced nature of the contest. He said: “He’s consistent and I don’t think the speed that they’ll go in this race will hold any fears as he travels really well.

The other ITV race on the card is the Heed Your Hunch At Betway Handicap Hurdle (2m 7f), in which Dr Richard Newland has another live chance courtesy of the in-form Taste The Fear. He said: “Taste The Fear has done really well for us and ran really well last time out at Worcester, when he was a bit unlucky late on. He’s been quite busy so this will be his last run before a short break, but I thought he deserved a tilt at the race.”

Elsewhere on the card, Nicholls runs Saint De Reve in the Betway Novices' Limited Handicap Chase. The seven year old carries the same colours as Darling Maltaix and Nicholls said: “He’s been ticking away nicely and this is his first run for Old Gold Racing, which is a new syndicate.

“He’s a summer horse rather than a winter horse, so he’s ideal for his owners and hopefully he’ll run well. He’s nice and fresh and should go tidy.”