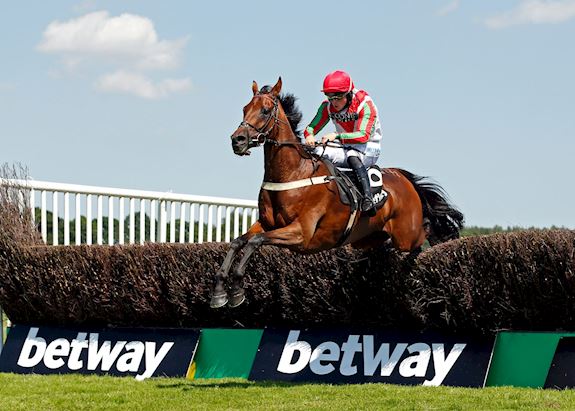 Market Rasen’s biggest day of the season on Saturday 17th July was blessed with glorious sunshine and proved be an outstanding afternoon of sport.

Peter Bowen may be based in Pembrokeshire, Wales but is always a trainer to be followed at Market Rasen and he landed the feature contest, the Grade Three Betway Summer Plate, for a record seventh time courtesy of Francky Du Berlais.

We sent Nick Seddon along to speak to the winners on the day….

BOWEN ON THE MARK AGAIN IN BETWAY SUMMER PLATE

Francky Du Berlais (11-1) was a dominant winner of the Betway Summer Plate Handicap Chase, sealing a record seventh success in the race for trainer Peter Bowen in the process.

Bowen had previously won the Grade Three contest with Stately Home (1997), Ballycassidy (2003), Yes Sir (2006), Iron Man (2007), Snoopy Loopy (2008) and More Buck’s (2018) and Francky Du Berlais was perhaps the most impressive of the lot, taking control of matters with a bold jump at the last before bounding clear for a seven and a half-length success under the trainer’s son James.

The victory also proved to be a fitting birthday present for winning owner Roddy Owen, who added to his victories with Ballycassidy and Iron Man by winning the race for a third time. And Karen Bowen, who was representing the winning trainer, was delighted with the performance.

She said: “I’m delighted for Roddy Owen because he’s been a fantastic and loyal owner over the years. We love this race and we love Market Rasen, Peter tries to find horses that he thinks will be suitable for this and we always seem to do well here. It took us seven and a half hours to get up here so it was worthwhile!

“He’s one of those who you’ve got to keep a lid on a bit and I don’t think Cartmel suited him last time out. He’s happier when he’s racing and you need a horse that can handle that type of race, because not every horse can handle that fast-run hustle bustle scenario.”

It proved to be a first victory in the race for James Bowen, who took the ride on Francky Du Berlais over Sean Bowen due to not being able to do the weight on Lord Bryan, who was pulled-up.

Karen Bowen added: “James was very excited and to be fair to the boys they’re very supportive of each another. James wasn’t able to do the weight on our other runner Lord Bryan but Sean will still be as happy for his brother as he is for himself and this is James’s biggest win on one of our horses.”

Meanwhile, the winning jockey said: “That was really good, and I couldn’t be happier. He did it so easily as well after the perfect run round. A strong pace really suits him, he would get further but a strong gallop over two and a half really suits him.”

Captain Tom Cat was a well-supported 100-30 favourite for the race and finished fifth for Dr Richard Newland, who commented: “I thought he ran really well. I don’t think he jumped as well as he can and the trip is just starting to stretch him, but he ran a really genuine race. I did say to the handicapper that putting him up 3lbs for beating a horse I used to train and struggled to win a claiming hurdle was a bit tough, but he’s run well.”

It proved to be an excellent afternoon for the Peter Bowen team, who added to their victory with Francky Du Berlais in the Betway Summer Plate with Rooster Cogburn’s (85-40 Favourite) victory in the finale, the Heed Your Hunch At Betway Handicap Chase – sealing a 36.5-1 double in the process.

The eight year old was an emphatic winner here in April, and seemed to relish the return to Market Rasen after a couple of below par runs, winning by 10 lengths.

And Karen Bowen, who was representing the winning trainer, was thrilled to have enjoyed a double on behalf of her husband, who was unable to travel north due to being ill.

She said: “He obviously likes it here and he doesn’t like to come back quick. He hasn’t run for seven weeks and after he won here last time he put so much into it that you can’t bring him back quick, so he probably won’t run for another six weeks because of the way he is, but he clearly likes it here.

“It’s been a fantastic day for us and hopefully it’s a boost for Peter because he’s not feeling very well. He’d have loved to have been here but I’ve just spoken to him and he’s glad he’s not as he’s been so ill.

“It’s really nice for the owner Gwilym Morris (owner) as he’s been with us from the start, as was Roddy Owen (Francky Du Berlais), so I was so pleased for both.”

It’s a notable afternoon for Market Rasen, with three races being shown live on ITV Racing. Those included the Betway Summer Handicap Hurdle, in which the 40-1 outsider Stonific caused a huge shock for the David O’Meara team.

The eight year old was having his first start over hurdles since February 2020, but he showed no signs of rustiness under Tom Scudamore, surging through on the inside rail to prevail in a pulsating finish – in which the first four were separated by under a length.

And the winning jockey said: “It was an ultra-tough performance, I wish David O’Meara had a few more jumpers now!

“It’s lovely to see everybody here, it’s been too long for obvious reasons and for a horse in a syndicate to win like this is fantastic for everybody. There are so many fantastic stories like this and it just goes to show that it doesn’t take very much to get involved – they deserve it.”

Steve Jessop, representing the winning part-owner Hurn Racing Club, added: “We’re all from Beverley and there’s 14 in the group, while the other half (Rasio Cymru) had a winner last night, so we’re having a good do!

“We’re just working class people and we’ve had the syndicate for 25 years so it’s just unbelievable to win this.”

Dr Richard Newland has revealed that he will put away the in-form Taste The Fear (100-30) for an autumn campaign after he picked up a third success of the year live on ITV Racing in the Heed Your Hunch At Betway Handicap Hurdle.

The six year old has had a busy start to the year, winning three times from nine starts, and was full value for his two and three quarter length success under Sam Twiston-Davies. And the winning trainer explained that it has taken a little while for everything to come together for his charge.

He said: “I didn’t think this win would be our winner to be honest, but it was a nice little race for him and he’s such a genuine horse. We had injury problems with him last year and couldn’t get him on the track after his bumper win, but since we finally got going on the track we haven’t looked back.

“If he hasn’t won he’s placed nearly every run and he’s owned by some super people so it’s really nice. I think it’s a break for him now and he’s won on softer ground, so I’m going to give him a six week break and we’ll see him back in October or November.”

Elsewhere on the card, Sid Hoodie (6-1) was an impressive winner of the second race on the card, the Betway Handicap Hurdle, for the Alex Hales team.

The seven year old is a recent addition to the yard following the retirement of Charlie Mann and Hales was delighted to repay the faith of both Mann and her owner Dominic Christian by providing him with a winner.

He said: “I’m delighted, it was very kind of Charlie Mann to ask the owners to send some horses our way when he retired and she was one of them.

“Her first run for us was a bit disappointing but we gave her a wind op and she’s done that well. The owner adores her, she’s no superstar but she’s won plenty of races so she’s a lovely mare to have around the place.

“I’m thankful because Charlie put a lot of faith in me to do the job with some of his ex-horses and it was the first winner we had for him.”