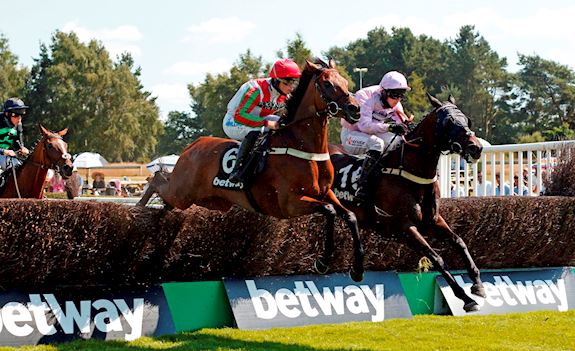 Two horses who landed big prizes earlier this year could be heading to Market Rasen this Saturday (October 16th) for the Lincolnshire track’s Symphony Group Raceday.

The eight year old created history when becoming a record seventh winner of the race for the Bowen team at Market Rasen in July and is now ready to make his reappearance in the feature Symphony Group Prelude Handicap Chase.

A good performance would be the perfect preparation for next month’s Betway Grand Sefton Handicap Steeple Chase at Aintree and Bowen is hopeful that the son of Saint Des Saints can once again make the long trip from Pembrokeshire to Lincolnshire a worthwhile one.

The trainer said: “He’s likely to run and seems to be in good form. He’s back at the scene of his finest hour, the only problem is he’s got 10lbs more this time around.

“It was a special day and that race has always been lucky for us, so it will be nice to have another runner there on Saturday – though I may stay a bit closer to home and go to Ffos Las!

“I hope he can hit the ground running for us there as he’s had a bit of a break since his last run. He worked really well this morning so fingers crossed he runs well.

“If he runs a good race we’ll probably take a look at the Grand Sefton at Aintree next month. He’s always jumped really well so I think he’d be an ideal type for the race.”

Saturday’s seven race card at Market Rasen is a strong one, with over £100,000 up for grabs in prize money and other potential runners on the day include last season’s Ladbrokes Lanzarote Handicap Hurdle winner Boreham Bill.

The Emma Lavelle-trained nine year old did not always look at home on his three starts over fences last term but proved better than ever when returned to hurdles, taking Listed honours for his yard at Kempton Park in January, and his trainer is hoping that he can build on that this term.

She said: “Market Rasen is an option for him, but not the only option. At the minute it’s probably 50-50 as there are also options for him to go to Cheltenham and Kempton coming up.

“He’s in great order and is very much ready to go, so it’s just a case of working out what the best option is for him and whether we want him giving away lots of weight or receiving some from others.

“We’re sort of planning his season back to front this time around. Last season we started chasing and went back over hurdles whereas this year I think we’re going to start over timber and keep his options open.

“The Lanzarote was a great day and I think we’ll probably just mix and match with him. There’s always a good race in him as he showed last season - everything just needs to go right for us to go and win it.

“He’s probably schooled the best he ever has this time around. I know it was a little bit unnerving on occasion over fences last term but I think he is in a good place at the moment and I’m very happy with where he is.”