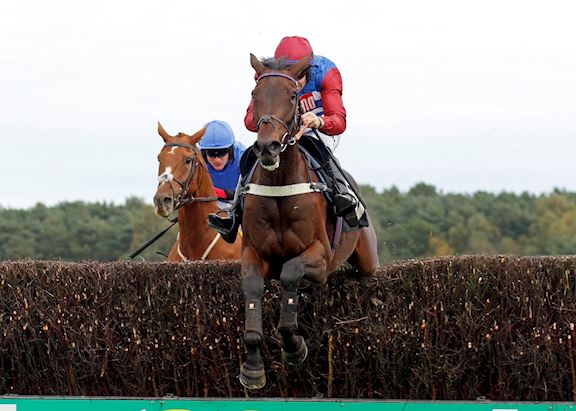 Market Rasen’s seven-race card on Saturday 16th October saw some decent action, headlined by the £45,000 Symphony Group Prelude Handicap Chase. Aintree now beckons for the winner of that contest, Senior Citizen, with the Betway Grand Sefton Handicap Chase over the Grand National fences in three weeks’ time next on the agenda for the eight year old.

We sent Nick Seddon along to speak to the winners on the day….

Senior Citizen (9-2 Joint-Favourite) warmed up for a tilt at next month’s Betway Grand Sefton Handicap Chase over the Grand National fences at Aintree (Saturday 6th November) with an impressive success in the feature Symphony Group Prelude Handicap Chase (2m 5.5f) at Market Rasen today, on what proved to be a memorable afternoon for trainer Alan King.

Victory for Trueshan in the Group Two Champions Long Distance Cup at Ascot ensured that the champagne will certainly be on ice for the team at Barbury Castle Stables later this evening and their fine day was improved with a composed performance from the son of Tobougg, who travelled well into proceedings and put matters to bed after the final fence to score by two lengths in the colours of the McNeill family.

Senior Citizen has run with credit on both of his starts over the Grand National fences to date, finishing a fine third in the Topham Chase in April, and King’s assistant trainer Robin Smith, confirmed that Aintree would be next for the eight year old.

Smith said: “(Alan King) is having a fine day at Ascot! Senior Citizen did that well and he is a horse we like a lot, he jumped great and we’ll to go the Grand Sefton in three weeks’ time.”

Winning jockey Adrian Heskin added: “It was a very nice performance He is a good horse when fresh and it was a nice opening mark for the start of the season.

“Aintree is the plan now and he’s jumped well around there twice. They’ve brought the Grand Sefton forward a month so the ground should suit him.”

It proved to be an interesting afternoon of action at the Lincolnshire track and there was a welcome return to the winners’ enclosure for jockey Charlie Deutsch, who rode his first winner for six months when guiding the Sam Thomas-trained Stolen Silver (6-4) to an 11-length victory in the Urbano By Symphony Novices' Limited Handicap Chase (2m 1f).

The six year old has some smart hurdling form under his belt and Deutsch was delighted with the run. He said: “I've had plenty of rides but not much luck, so it's nice to get a boost and get one on the board."

"He did it well and he didn't miss a beat with his jumping. He's very free-going and the ground helped him, he bounced off it. I'm delighted for Sam, it's one of his first few runners this season."

“It’s a three-runner race so you never really know how strong the form is, but it’s good to get one on the board. He was a smart hurdler and it’s nice to know there’s still ability there, so it’s great.”

MARTELLO ON THE UP

Another notable winner on the card was the Lucy Wadham-trained Martello Sky (7-4 Favourite), who was a clear-cut winner on her handicap debut in the Linear By Symphony Handicap Hurdle (2m 4.5f) when taking the honours by nine and a half lengths.

And winning jockey Bryony Frost feels that there’s plenty more to come from the daughter of Martaline yet. She said: "Today was her first time in a handicap, against horses that deserved to be their rating, and for her to be able to do that boosts her even more. Her jumping is becoming slicker, it's something we need to work on but her engine is very much there. She's got a very bright future."

Meanwhile, Frost provided an update on her much-loved partner Frodon, who is on course to reappear over in Ireland in a two weeks’ time. She said: “In a fortnight’s time we go over with Frodon to Down Royal for the Champion Chase, so that’s exciting. We’ll go and gallop on Irish turf and see how we get on – I’ve never ridden there as a professional, only as an amateur, so I’m looking forward to it.”

Maninsane (11-2) proved to be a heart-warming winner of the Horatio Vincent & Marjorie Beckett Memorial Maiden Hurdle (2m 0.5f) for the Charlie Longsdon team. The six year old, who scored by an impressive 11 lengths, was a faller when last seen at Southwell in February, from which his trainer explained he was lucky to have made a full recovery.

“It was a very long road back and his owners (Barrels of Courage) have been very patient, so it’s good. We always knew he was a nice horse and his form last season was pretty solid, it took a 120 horse to beat him and we know he’s better than that.

“He’s a grand horse and he’s a chaser in time, he was jumping his hurdles like fences today but we couldn’t go chasing after a fall like he had last time out.”

ON MY COMMAND LOOKS GOOD RECRUIT TO FRY TEAM

The opening race was Gallery By Symphony Mares' Novices' Hurdle (2m 4.5f), which saw On My Command (7-4) make a winning start for the Harry Fry team with a pillar-to-post performance under Jonathan Burke.

The five year old was having her first start since switching from the Amy Murphy yard and the winning jockey was pleased with the performance. He said:  “She did that well. She had the experience I suppose and she had some good form as well.

“She’ll be better when she gets a lead but she’s a very honest mare and when you ask her she sticks her head down and she jumps as well. I imagine she’ll jump a fence in time and it’s a good win for her.”