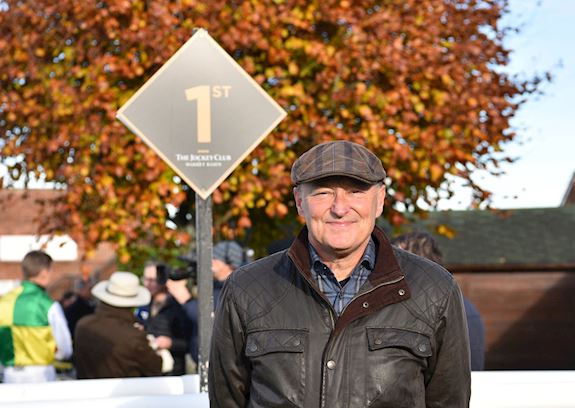 A racegoer with a passion for his local track has stepped in with a generous offer to sponsor the feature race on Boxing Day at Market Rasen.

This year’s Lincolnshire National Handicap Chase will proudly feature the name of local racegoer and breeder Chris Liesack (pictured below), who noticed the race was without a sponsor when watching the rearranged renewal when it was held behind closed doors due to COVID-19 protocols last year.

Chris, who is based just a short drive away from the Lincolnshire track, explained that he felt compelled to look into the possibility of helping out a racecourse at which he has enjoyed many happy memories over the years.

He said: “I’d class myself as a small breeder and a racing enthusiast and Market Rasen is my local track, about 25 minutes away. I usually go on Boxing Day to Market Rasen and always recognised the Lincolnshire National as the feature event of the day – for all that it can’t really compete with a certain race at Kempton Park!

“The race used to be sponsored by a construction firm called Clugston, but after they fell on hard times during the pandemic it was left without a supporter, something which I noticed when watching the race last year. I made a tentative enquiry with the racecourse in February time with a view to giving something back to my local course and it went from there.

“What also came about was providing a new trophy for the race, as the previous one had the old sponsor’s name on it. I found one for them – which is very heavy – so it’s nice to leave a lasting legacy for the race.”

As sponsor of the feature contest, Chris will enjoy all of the associated perks including handing over the prize to the winning connections and he added that he is looking forward to getting his friends and family involved with the process.

He said: “I will have several guests with me on the day and I’ll very much be taking a back seat so that they can have a go at things like judging the best turned out award and giving out the prize to the winning connections.

“It will be great to see friends and family of mine getting involved with the sport and it was one of the main things that persuaded me to sponsor the race.

“Market Rasen is local to me and it has given me many happy memories over the years, so I just thought I’d give a bit back. It’s been really nice to convene with everyone at The Jockey Club while organising this and the whole thing has been a really nice process. There’s usually an excellent crowd in for the Boxing Day meeting and it should be lots of fun.”

While he has opted against adding any commercial interest to the race, Chris has enjoyed plenty of success over the years as a breeder. He explained: “I’ve had a small interest in breeding for a number of years. We’ve had our ups and downs but one of our big successes was breeding a horse called Ventura Mist, who went on to win the Listed Two Year Old Trophy at Redcar.

“Our angle in is that we try to look at ‘bargain’ sires who we can get plenty of value from and it was fantastic to see that filly go on to enjoy plenty of success in pattern company.

“She was a runner in the Queen Mary Stakes as a two year old and although she wasn’t able to win it was some privilege to see my name in the Royal race card as a small breeder.”