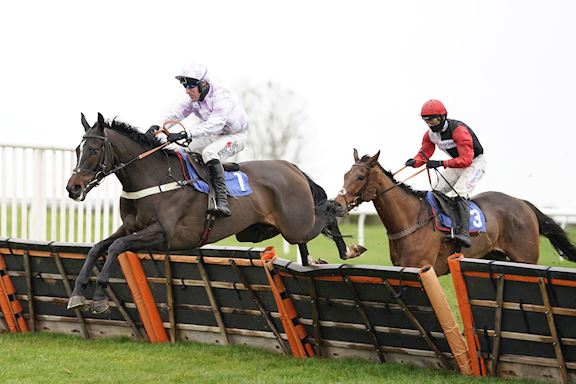 Colin Tizzard is confident that Striking A Pose can continue his progression by completing a hat-trick of victories for the season in the European Breeders’ Fund Paddy Power ‘National Hunt’ Novices’ Handicap Hurdle final at Sandown Park tomorrow (Saturday 12th March). 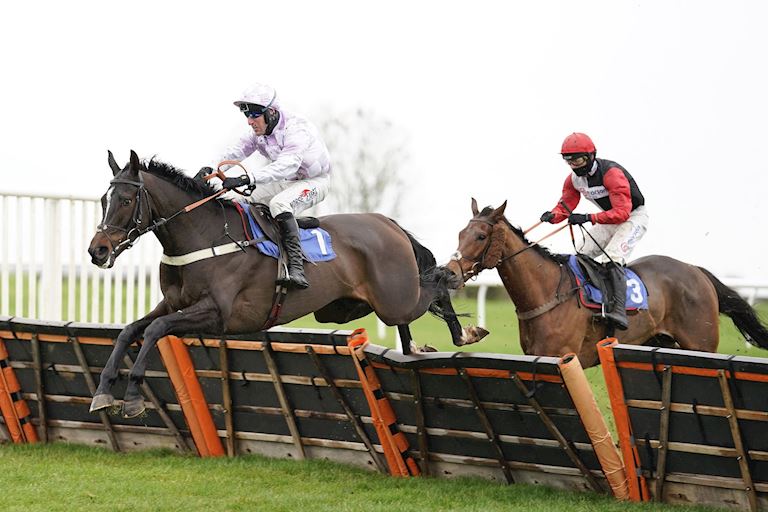 After following up his debut victory over hurdles at Wincanton with a comfortable success under a penalty at Exeter last time out the lightly raced five-year-old will attempt to take his form to new levels when stepping up to Grade Three company for the first time on Saturday.

Tizzard said: “He has won his last two and he couldn’t have won any easier at Exeter where he never even came off the bridle, though it wasn’t the strongest of races.

“I love running horses at Cheltenham just in case they are better than what you think. He is off 130 so if we thought he was good enough to go Cheltenham, where we had him in the Albert Bartlett, then he is good enough to win this one.

“He was green as grass at Newton Abbot first time out this season but he had only run once before. He is a beautiful horse on the gallops. I wouldn’t be surprised if he was in the shake-up.

“If he is good enough he could go to Aintree but we need to find how good he is and this is a step up again and it is a completely different job to the one at Exeter.”

Tizzard is also represented in the 2m 4f contest by Road Senam, who will be bidding to claim a career first success.

He added: “He ran into six hurdles at Doncaster and he still finished third. He came over with quite a big reputation from France but he hasn’t shown it yet.

“If we are going to lose his novice status we don’t mind doing it in this race. It is better doing this than going for a little novice as if he doesn’t win this he will be a novice next season.”

Sam Barton finished two places ahead of Road Senam at Doncaster last time out when opening his account over hurdles and trainer Emma Lavelle expects to see further improvement from the six-year-old. 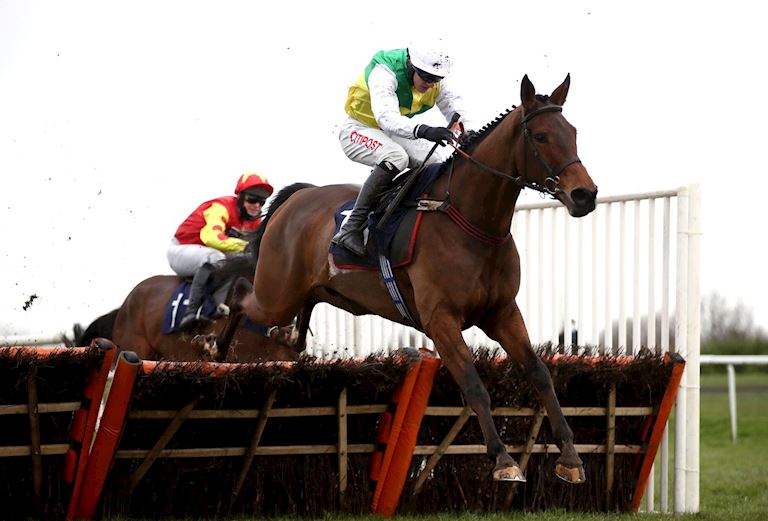 Lavelle said: “Sam Barton is a lovely horse that is clearly going to be a chaser going forward. The race at Doncaster has worked out well and he has come on for that mentally and physically and is in good form. He has got the right profile for this race.

David Pipe expects the return to two and a half miles to help Martinhal, who is another chasing a three-timer following back-to-back victories at Exeter. 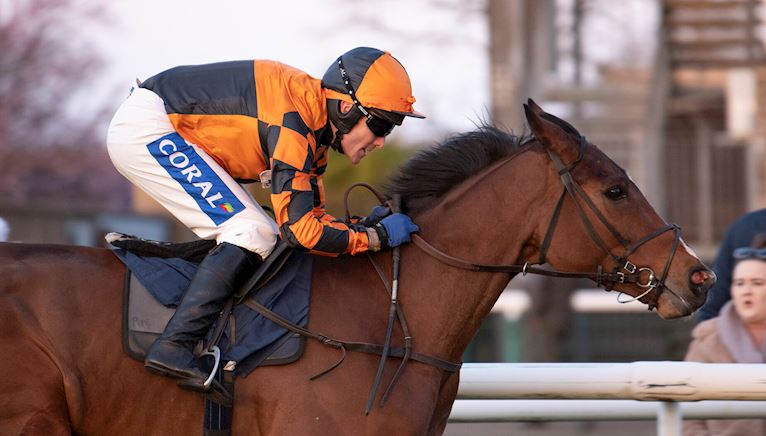 He said: “Martinhal has got a great attitude and I think the step back up in trip will help him as well. The ground is going to be quicker than he has encountered but I’m sure he will handle it. Whether he is as effective on it only time will tell.

“It is difficult winning handicaps like this off top weight but we will give it a go. Dynaste finished sixth in it off top weight and he still ran a very good race and Martinhal could do the same.”

Dorking Boy was denied a potential first hurdles success at Plumpton last time out after the race was voided midway through, but trainer Gary Moore feels it could have worked out in his favour.

He said: “I think he would have won at Plumpton but no one will ever know. He has sneaked into this race though on a nice racing weight. If it is genuine good to soft ground I can see him improve on his last run. I think he wants this sort of trip and he has a good each-way chance.”

Meanwhile High Up In The Air will bid to continue his remarkable run of form by attempting to complete a six-timer over fences for Moore in the Listed Paddy’s Rewards Club Novices’ Handicap Chase, which was switched from the Cheltenham Festival to the Esher track. 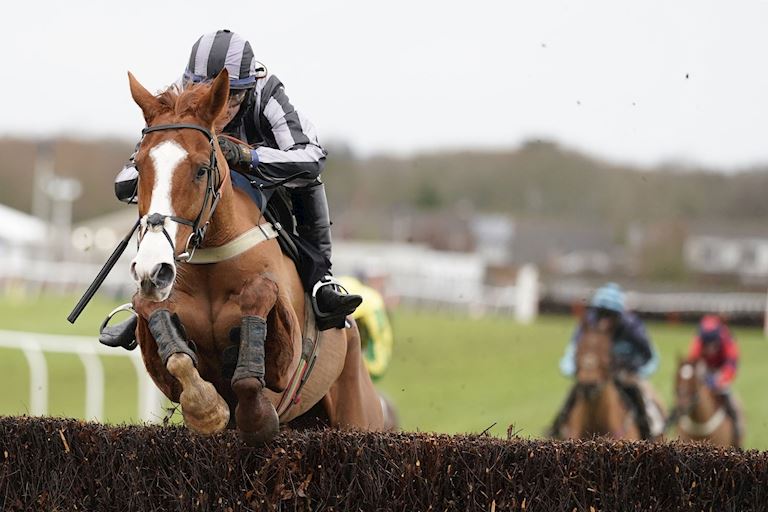 Moore added: “He has won five average races but this is a massive jump up in class. It’s a much tougher race with horses like Belargus in there. He just needed that first run over fences at the start of the season while he loves soft ground and was well handicapped.

“He is a very good jumper and that has helped him. He has won here before but that was over shorter and I think the extra few furlongs will suit him.”

Lucy Wadham expects Admiral Barratry to be well suited to the track when the eight-year-old attempts to add to his sole victory over fences at Fakenham in the 2m 4f event.

She added: “His form is rock solid and the horse (Fire Away) he only just failed to give over a stone to last time at Fakenham has bolted up while Corrany who he beat the time before has since won.

“We’ve had this race in mind for about a month as he is a fantastic jumper. Jumping is his asset and the track should play to his strengths but it is a competitive open looking race.”

Code Name Lise will bid to try and give the Newmarket handler success earlier on the card by backing up her last time out victory at Ascot in the Listed British Stallion Studs EBF Mares’ Standard Open National Hunt Flat Race. 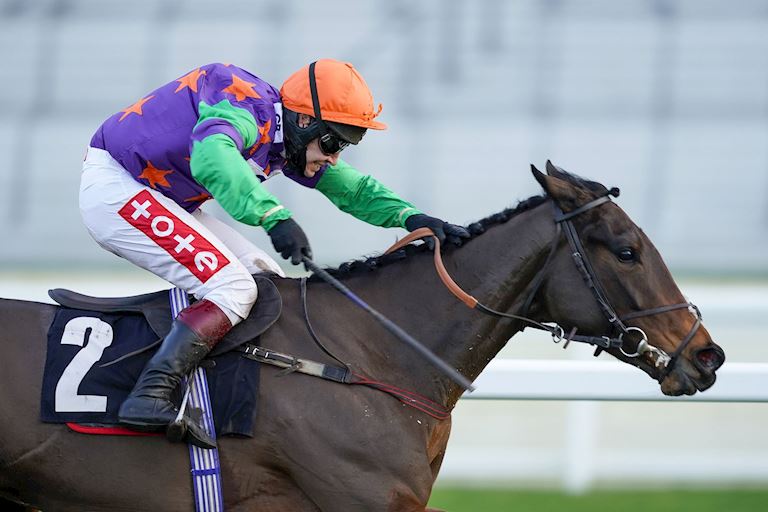 Wadham added: “It looks a really tough renewal this year but at home Code Name Lise is in good form. I think the track will suit but it’s going to be a very tough race - it would be nice to finish in the first three.

“I thought she did it quite nicely at Ascot considering she was so green but she always looked like she was going to win. Racing in front of the big empty stand at Ascot will stand her in good stead here.”

Having claimed the 2013 renewal with Molly’s A Diva, trainer Kim Bailey will rely on Flirtatious Girl, who filled the runner’s up spot behind the opposing Rainyday Woman at the same level at Huntingdon last time out, to give him a second victory in the race.

Bailey said: “She has run well on her two starts this season and she seems to have improved at home. The track will suit as all she did was stay at Huntingdon and she and the winner finished a long way clear off the third.

“She is not very big and the weight she receives from Rainyday Woman will help, but I was very impressed with her last time out as she pulled hard but still managed to win. It’s probably the most competitive mares’ bumper this season but hopefully, she will run well.”

Sandown Park’s annual preview for The Festival™ supporting WellChild will take place virtually this year on Saturday 13 March at 8pm via Sandown Park’s Facebook page. Mick Fitzgerald will host a panel of Harry Fry, Emma Lavelle, Josh Moore, Andrew Thornton and Paddy Power’s Frank Hickey to provide viewers with great insight and their best bets for the week, as well as answering questions submitted from those watching.