The Randox Grand National is a contest like no other. Forty runners compete over more than four miles and over 30 unique fences, including Becher’s Brook, Valentine’s and The Chair.

First won in 1839 by a horse named Lottery, the race gained a reputation for being exactly that - a handicap race giving 100-1 chances the same opportunity to win as red-hot favourites.

In recent years trainers and jockeys have praised the Grand National as rewarding a better quality of equine athlete, but that doesn’t mean outsiders can’t spring a surprise.

No matter whether you’re a seasoned racing fan who travels the country following your favourite horses or someone who tunes in on ITV just once a year, the Grand National is the race the world stops to watch.

Sweepstakes are run in offices up and down the UK, the runners and riders are scoured for favourite colours or names and families put life on pause to watch at 5.15pm.

Tiger Roll’s back-to-back victories in 2018 and 2019 have helped write him into the history books alongside three-time winner Red Rum and dual 1890s winner Manifesto.

Every year offers its own unique fairytale story for trainers, owners, horses and jockeys and we’ve picked out some of the classic Grand Nationals from our archives, putting them in one place for you to watch from start to finish.

No horse has a better record in the Grand National than Red Rum and this is where the legend began.

Trained by Ginger McCain on Southport Beach, his gutsy determination and love of the Aintree track would go on to catch the imagination of the public and make him one of the most popular racehorses in history.

He won the race three times and finished second on his other two appearances in the National. ‘Rummy’ actually started his career running in five furlong Flat races as a two year old and was ridden by Lester Piggott, but soon went on to run over fences.

In 1973 he lined up as an eight year old with jockey Brian Fletcher on board as 9-1 joint favourite with Australian steeplechaser Crisp.

Top weight in the race, Crisp led from the start and built up what looked like being an unassailable 20 length lead.

But Red Rum – often referred to as ‘The People’s Horse’ - had other ideas and, after clearing the last, proved the stronger of the two on the run-in to take the spoils in the final strides of an epic battle.

Only a few jockeys are lucky enough to know what it feels like to win the Grand National, so you can forgive them for struggling to find a way to describe it – especially just moments after the finishing line.

So, we’ll have to take Mick Fitzgerald’s word for it when he said victory on Rough Quest in the 1996 renewal of the world’s greatest steeplechase was “better than sex”.

Fitzgerald was one of the greatest Jump jockeys of his or any other generation, but only won the Grand National on one occasion.

Trained by Terry Casey and owned by Andrew Wates, the 10-year-old Rough Quest was a 7-1 favourite on the day and went on to win by just over a length.

The race was subject to a stewards’ enquiry for only the second time in Grand National history following claims Rough Quest had impeded the second-placed horse Encore En Peu in the run-in. The result, however, stood.

Jockey Ruby Walsh is a name synonymous with the Cheltenham Festival, having ridden a record 59 winners there during a career spanning more than 20 years.

He went on to become the third winning-most Jumps rider of all time with 2,737 winners before hanging up his breeches in 2019.

Among them were two Grand Nationals, the first in his very first ride in the race as a 20-year-old back in 2000.

Papillon, a horse trained by his father Ted Walsh, had finished second in the Irish Grand National two years earlier and was 33-1 on the morning of the Aintree showpiece.

By the time the tape was raised that afternoon, however, he was just 10-1.

Walsh might be the most decorated jockey in Cheltenham history, but he describes the victory at Aintree that day as “the greatest occasion in my life”.

He went on to win the National once more, in 2005, on Hedgehunter for owner Trevor Hemmings and trainer Willie Mullins.

Starting the 2009 Grand National at a price of 100-1, it wasn’t just the odds that were stacked against Mon Mome – the history books were too.

No horse had won at such long odds since the famous and extraordinary 1967 race, when Foinavon took advantage of every horse refusing or falling at the fence which is now named after him, to land the National at 100-1.

Mon Mome’s trainer Venetia Williams still describes the day as the best of her career and for jockey Liam Treadwell, who was making his debut in the race, it proved the highlight of his time in the saddle by far.

But his victory in the 2009 race was as impressive as it was unexpected, storming home by 12 lengths in a time of 9 minutes 34 seconds and beating Comply or Die, who had won the race 12 months earlier.

No jockey in the history of Jump racing has won more races than Sir Anthony McCoy.

The man the sport will forever call ‘Champ’ rode a record-breaking 4,358 winners and was crowned Champion Jockey in every single one of his 20 years as a professional.

However, after 15 years in the saddle he found himself searching for the one major prize which still eluded him – the Grand National.

On April 10th the Jonjo O’Neill-trained Don’t Push It was 20-1 just a few hours before the National tape went up, but started at 10-1.

After jumping soundly throughout, McCoy and Don’t Push It headed Black Apalachi at the famous Aintree Elbow and went on to win by five lengths.

Victory in 2010 not only helped McCoy end his Grand National hoodoo, it also saw him crowned BBC Sports Personality of the Year just a few months later.

Paul Nicholls has been Jump racing’s Champion Trainer no fewer than 11 times, trained more than 3,000 winners and saddled some of the greatest horses of his, or any other, generation.

And while many consider Kauto Star as the very best of those to have emerged from his production line of equine superstars in Ditcheat, Somerset, there is one horse who gave Nicholls something no other has – a victory in the Grand National.

Neptune Collonges had run only once before at Aintree, in 2006 when finishing third in the Sefton Novices’ Hurdle. On that day he was ridden by Christian Williams, the man who now trains Virtual Grand National hero Potters Corner.

Fast forward to April 14th 2012 and it was Daryl Jacob on board for the first time, after Ruby Walsh and Noel Fehily had passed up the opportunity in favour of other better fancied mounts.

Starting the race as a 33-1 outsider, Neptune Collonges went on to provide the closest ever finish to a National – with a photo required to separate him from the gallant Sunnyhillboy in second.

Jacob still recalls looking down at his number cloth before the winner was announced, checking that he and his partner were number four.

Straight after the victory, Nicholls announced Neptune Collonges was to be retired.

It remains Nicholls’ and Jacob’s only Grand National triumph to date and serves as a reminder, if it were needed, that no matter how brilliant the jockey, trainer or even the horse, you need a little luck along the way to win the world’s greatest steeplechase.

Not since Red Rum has a Grand National horse caught the public’s imagination quite like Tiger Roll.

Trainer Gordon Elliott was no stranger to success in the race after winning in 2007 with Silver Birch.

But thanks to ‘The Tiger’, he and jockey Davy Russell have written themselves into Grand National folklore, with Tiger Roll now one of only five horses to win the race back to back.

On April 4th 2020 Tiger Roll was due to attempt to become the first equine superstar to win three years running – only to be robbed of the opportunity by coronavirus and a nationwide lockdown.

Only time will tell if he lines up alongside 39 rivals in 2021. For now you’ll have to make do with sitting back and enjoying his 2019 victory all over again.

At 4-1 Tiger Roll started as one of the shortest priced favourites in the history of the Grand National. But his performance proved he more than justified the support of punters who roared him out onto the track and roared him back home again.

Hundreds were waiting on the streets for him when he returned back to County Meath in Ireland for his victory parade, prompting Elliott to describe him as the modern day “people’s horse”.

High, but justified, praise for a horse who will forever be an Aintree legend. 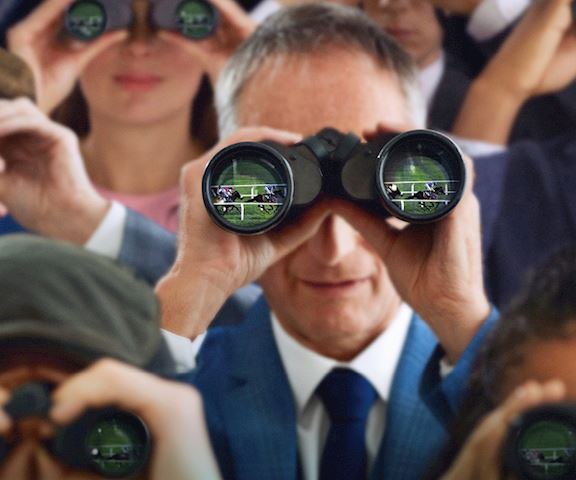 Be the first to hear when tickets are released for all three days of the Randox Grand National Festival.