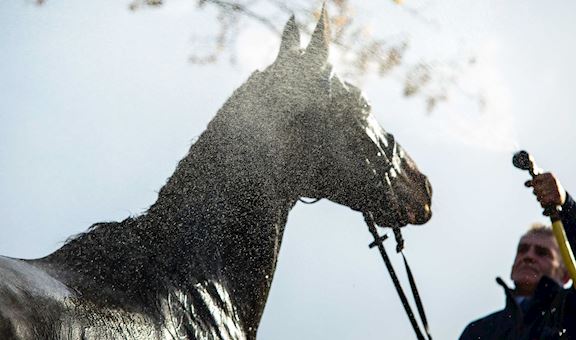 Horse Welfare 365 days a year at the yard

Oliver and his team talk about the many aspects of equine husbandry involved in ensuring that their horses receive the highest possible standards of care and attention.

Alice also catches up with jockey Leighton Aspell, who partnered Many Clouds to his Aintree success as well as enjoying victory on Pineau De Re in 2014. Leighton discusses the progress made at Aintree Racecourse since 2012, highlighting the switchover to plastic cores in the Grand National fences and the ability to bypass fences.

Finally, Alice pays a visit to the Lambourn training grounds where Operations Manager Will Riggall talks about the value of the Aintree schooling fences which are built by the Aintree team every year at the main training locations in Britain and Ireland.

The Owner: Ownership is a year-round responsibility. Time, care and patience is always required, with the best interests of the horse the number one priority. Owner Josh Apiafi talks through what is involved.

The Trainer: A trainer runs the yard, prepares and develops horses over months and years, requiring total commitment and dedication both from themselves and their staff. Oliver Sherwood talks about welfare from a trainer’s point of view.

Stable Staff: Thousands of stable staff across the UK work incredibly closely with their individual horses on a daily basis. Gracie O’Reilly reflects on her role.

Jockeys: Dual Grand National-winning jockey Leighton Aspell talks about what is involved every day and what it is like to ride over the fences at Aintree that have been developed since 2012 to improve horse welfare.

Farrier: The role of the farrier is an essential part of horse welfare; each yard will have a farrier visit almost every day of the week assessing and fitting shoes. The number one priority is the welfare of the horse’s feet. Farrier Ben Wishart explains what is involved.

Individual Daily Routine & Diet: Every single horse has a carefully managed daily routine. Stable staff develop individual plans for each horse in their care.   Assistant Trainer Andrew Llewellyn talks about how they build a bespoke routine for each horse adapting everything from their diet to their exercise.

The Training Gallops: Training horses on the gallops and over schooling fences is an essential part of their routine. Aintree builds unique Grand National-style schooling fences across the UK and in Ireland so horses can prepare and develop their skills before they even arrive at the course. Operations Manager Will Riggall discusses everything involved in managing The Jockey Club gallops and the Aintree schooling fences at Lambourn.