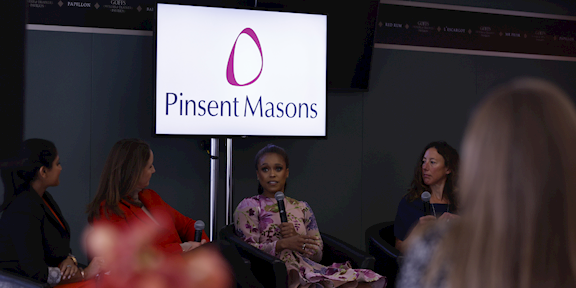 First staged in 2015 and in its seventh year, today was the first time the event has taken place in person since 2019 due to the coronavirus pandemic, with last year's Summit held ‘virtually’.

Supported for the first time this year by leading Corporate, Commercial and Sports law firm Pinsent Mason, the sold-out Grand Women’s Summit was hosted by broadcaster Karthi Gnanasegaram, as the panel spoke about 'Mental Resilience’ both within sport and its relevance to everyday life for millions of people, particularly in light of the COVID-19 pandemic.

ITV Racing co-host Alice told of her pride for racing being the first live sport to return amid the pandemic.

Speaking in a Q&A at the event, she said: "Racing should be really proud of ourselves for the last couple of years because everybody came together and managed to get the sport on. We were the first live sport to be back on, and ITV, alongside racing, put in place protocols which meant we did have the Grand National last year behind closed doors.

Boxer Natasha, who became the first British female fighter to qualify for the Olympics after reaching the semi-finals of the 2012 World Championships, joked that home schooling was one of her biggest challenges throughout the pandemic.

The star - who has daughter Mela and is a Ladies Day ambassador for this year’s Randox Grand National Festival - said: "I think the biggest struggle was the home schooling.

"That was the biggest challenge that I've faced in my boxing career! My little girl has always known what I've done and seen me on the TV, but she's never actually come along.

“She knows mummy works in the gym, and our outside lesson was PE so she got to come along and see what happens when I go to the gym. That was a really nice moment."

Triathlete Chrissie also told the audience: "It was challenging for so many people, but when we reflect back I think it forced us to adapt in so many ways. At the heart of that is an appreciation for the resilience we have. Not only as individuals, but as communities. Hopefully we can utilise those strengths we have unearthed over the last few years to help us in the future.

"For me, being outside and being active and moving was so, so important. It was the thing I could control. I really focused on my movement and my diet, and that helped me endure the last couple of years in ways I didn't think I could."

The Aintree Grand Women’s Summit proceedings got underway with a live performance of Golden Slumbers by soprano Laura Wright, who has sung the National Anthem at every Grand National since 2016.

Wright, who had also performed at the opening ceremony on Day One of the race meeting, said: "I think I demonstrated some mental resilience singing in the rain and the wind out there on the course yesterday, but it was still a very special start to the Festival. It feels good to be back in front of familiar and friendly faces."

Launched by the racecourse in partnership with BBC Radio Merseyside at the 2021 Randox Grand National Festival, the accolade is in memory of Aintree’s late Chair Rose Paterson, who sadly passed away in 2020.

It combines two of Rose’s passions, the community and the Grand Women’s Summit, and its aim is to recognise on an annual basis a girl or woman from Merseyside who is making a difference to grassroots community sport, either through participation or support.

Rose's daughter, Evie Paterson, announced Bridget Griffin, a geography teacher who co-founded Liverpool-based social enterprise Park Palace Ponies - a riding school in Toxteth, which is based in an old cinema and has given more than 2,000 children access to horse riding, which they would not otherwise have - as the winner.