Both chases are staged over two miles, five furlongs and 19 yards, and the maximum field size is 30.

Ultragold (Colin Tizzard) has won the Randox Health Topham Handicap Chase for the last two years, including at 50/1 in 2017, and the 11-year-old is among 76 entries for this year’s edition.

Ultragold has the opportunity to emulate Always Waining (2010, 2011, 2012), the only triple winner of the Randox Health Topham Handicap Chase, though connections have indicated that he is more likely to contest the £1-million Randox Health Grand National on Saturday, April 6. 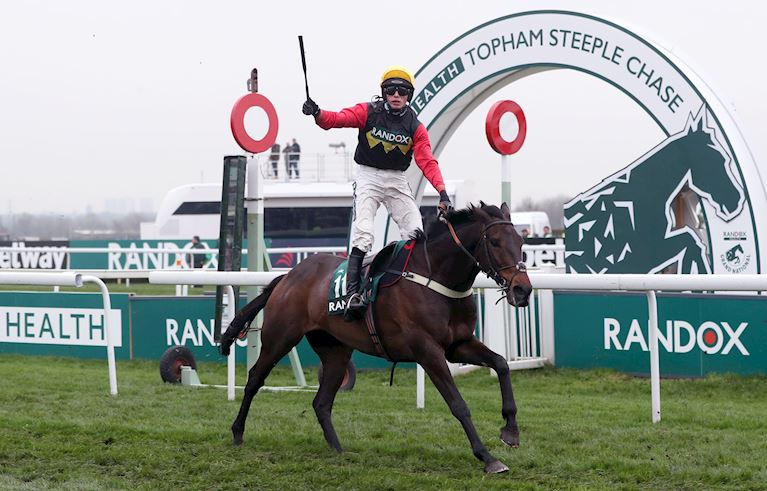 The Lambourn handler has 10 entries in total, the most of any trainer, including G3 Ultima Handicap Chase victor Beware The Bear and likely top-weight Janika, who took second in the G3 Brown Advisory & Merriebelle Stable Plate at Cheltenham on March 14.

Willie Mullins accounts for three of the 11 Irish-trained entries this year, with his team including dual G3 scorer Cadmium and Leinster National third Bellow Mome. No Irish-trained horse has captured the Randox Health Topham Chase since Cregg House in 2005.

A G2 winner over hurdles at Cheltenham in November, 2016, Peregrine Run has since won five of his 11 chase starts. The nine-year-old enjoyed a fruitful campaign in the early part of this season, winning a competitive handicap chase at Killarney in August and the Listed M.W. Hickey Memorial Chase at Wexford in October. He has not raced since finishing fourth behind Snow Falcon in a G2 contest for second-season chasers at Down Royal on November 3.

Fahey revealed: “Peregrine Run is in good form. He will have a run over hurdles at Thurles this weekend and that will hopefully leave him spot on for Aintree.

“We had a good time of it with him in the earlier in the season. We wanted to give him a winter break but, with the way things worked out with the ground over here, we probably ended up giving him a break at the wrong time.

“The last time he ran in handicap, I thought he was very impressive at Killarney. I am looking forward to getting him back in a handicap – he is a quick, accurate jumper and I think the Topham will suit provided the ground is in his favour.”

They include Road To Rome (Joseph O’Shea) who ran a gallant race from the front when fourth in the St. James’s Place Foxhunter Chase at Cheltenham on March 15. Ucello Conti (Gordon Elliott IRE), who has contested the Randox Health Grand National for the last three years, was a place further back in fifth.

Owner David Maxwell has six entries to choose from, as he continues his quest to be crowned champion amateur jockey. They include Cheltenham third Shantou Flyer (Richard Hobson) and other familiar names such as Road To Riches (David Christie IRE), a G1 winner in his pomp for Noel Meade, and Unioniste (Paul Nicholls).

Class 2, £45,000 Total Prize Fund. Thursday, April 4, 2019, 2m 5f 19yds over the Grand National fences. For six-year-olds and upwards, who, after October, 2016, and before March 18, 2019, have finished first, second or third in a Hunters' steeple chase on two occasions OR have finished first, second or third in a Hunters' chase on one occasion and have won either another chase (Hunters' chases included) or, during the current Point-to-Point season, an Open Point-to-Point chase. Weights: 12st, mares allowed 7lb. To be ridden by amateur riders holding Category B permits to ride, or amateur riders riding under the provisions of Rule (D) 27. Entries closed March 19, entries revealed March 20 (44 entries), six-day confirmations March 29, final declarations 10am April 3. Maximum field 30 runners.