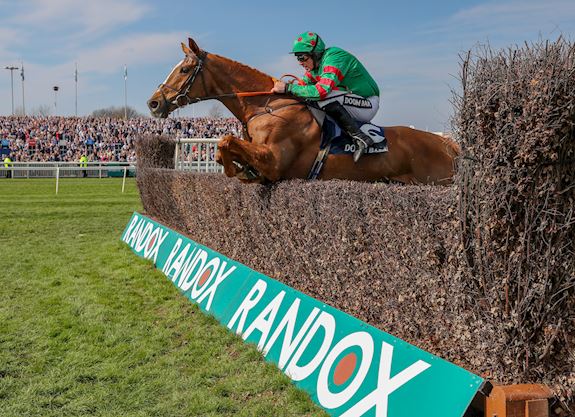 John Phelan won a six-figure sum on an accumulator bet, and invested some of the money in buying Ornua, who won today's G1 Doom Bar Maghull Novices' Chase.

The Henry De Bromhead-trained eight-year-old bounded clear turning for home and would not surrender the lead, passing the post 1¾l clear of runner-up Us And Them, his 3/1 jf at the off. The winner was ridden by Davy Russell, who will ride the favourite, Tiger Roll, in the Randox Health Grand National.

Phelan, who owns Ornua with Syed Momin, said: "I won the Scoop6 and thought easy come, easy go. I won about £130,000 but then I bought Ornua to a low budget. Henry picked him out and it's just fantastic. You don't expect to have a G1 winner on a low budget. I am speechless, really."

De Bromhead said: "I'm thrilled for John, who has long been a great supporter. It was brilliant for the horse and Davy gave him a great ride.

"He got him jumping great and it is lovely to get a G1 winner here. He's a horse that has become very good over fences. At Roscommon he beat Cadmium [the easy winner of yesterday's Randox Health Topham Chase] and his form is good. He was unlucky at Cheltenham [when falling in the G1 Arkle Chase], but this track seems to suit. He was perhaps caught out by the hill at Sandown.

"He hasn't been too busy this winter so we'll take a look at the two-mile novice at Punchestown."

De Bromhead runs Valseur Lido in the Randox Heath Grand National. He said of that horse, the mount of Rachael Blackmore: "He's in good form and had a good run in the race last year. He's a stone lighter in the handicap, which is not a good sign in one sense, but he's a bit of an enigma now. If he's on a going day and the fences get him going anything could happen."

Davy Russell does not lack confidence, but if he was looking for a boost before Tiger Roll's bid for a historic second win in the Randox Health Grand National he got one when the Henry De Bromhead-trained Racing Post Arkle Chase faller Ornua (3/1 joint-favourite) made all and held his market rival Us And Them by a length and three-quarters in the G1 Doom Bar Maghull Novices' Chase over two miles.

Russell, who had not ridden Ornua since he was a novice hurdler, was delighted and said: "Ornua is quite quick, so I knew that I would able to lead but whether we were going too fast was the question. Henry and the lads do a great job - he is quite a handful but he is trained by a master - and it's great to be riding these horses for these people.

"I tried to save as much as I could but he is quite exuberant in his way of running, so it is quite hard to know if you are going too quick or not. To be fair, the horse is very game and gutsy. He galloped to the last good and well and then on to the line. He is a good horse.
"These are championship races and this is where you want to ride winners. I am just delighted to have ridden one for Henry here."

It was much the biggest win as an owner for John Phelan, who got into racehorse ownership following a big win on the Tote Scoop6 in 2010. He said: "I've dabbled in small shares with horses since then, but I've got 75 per cent of Ornua and this is my first Graded win."

He added: "I was born in Waterford, but my parents came over when I was 18 months old and I've been in London so long that I thought that having a horse with Henry would give me a good excuse to go back now and again."

Us And Them (3/1 joint favourite) collected his fifth second spot in succession when filling the runner-up spot in the G1 Doom Bar Maghull Novices' Chase. The son of Stowaway, who is trained by Joseph O'Brien, has now finished second in four Grade 1 novice chases and was beaten just a length and three-quarters today.

Irish jockey JJ Slevin said: "The winner is a very good horse and loved that ground. My lad went well, but the winner was very good today."

Dan Skelton, trainer of the third-placed Destrier (7/1), said: "We're delighted with Destrier. He's six years old and having his third run over fences. We were always going to come here - we don't wish we'd gone somewhere else - but I think there's a bit more to come.

"One of the owners lives in Ireland, so a run at Punchestown is a possibility. But I'm just delighted with the horse. Ever since he made his racecourse debut, he's just improved. I love him. There's a lot to come from that horse."