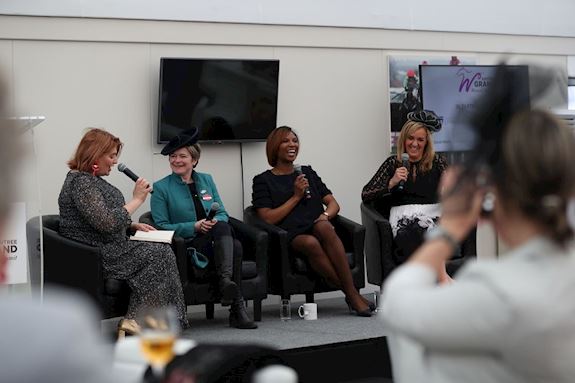 Mental health wellbeing - both in sport and away from it - took centre stage at the 2019 Aintree Grand Women's Summit, which was hosted by The Daily Telegraph columnist and best-selling author Bryony Gordon and featured Olympic Gold Medallist Denise Lewis OBE, former TalkTalk chief executive and Cheltenham Gold Cup winning owner Baroness Dido Harding and Tracey Neville MBE, the coach of last year's Commonwealth Games winning England netball team.
Gordon, a mental health campaigner whose popular podcast 'Mad World' has had Prince Harry as a guest, spoke of how far she has come in the five years since she was in a "mental health closet" and of her delight at Aintree putting on such an "amazing" event - its fifth such summit and run in partnership with the University of Liverpool and Women In Racing.
Addressing a sell-out audience, many of whom walked the course afterwards, Aintree Chairman Rose Paterson drew attention in her introduction to the huge success enjoyed by women in racing in recent years, to Bryony Frost's recent adoption as a "national treasure" and to the first-day success of Amy Murphy as one of the youngest trainers of a Grade 1 winner, to Jessica Harrington's success with Supasundae in the Aintree Hurdle, and to Tabitha Worsley's "superb winning ride on Top Wood just a year after breaking her back in a fall".
However, while celebrating the success of women in racing, the summit was swift to move on to the ongoing issues with mental health and wellbeing and how best to continue the great strides made in addressing them, with Gordon and the panel covering topics including:
The format was conversational, and at the end it was enthusiastically applauded by an audience that was by no means exclusively female.